Following the death of Pastor Johann Georg Herwig in 1782, the Norka congregation sent a recruitment letter to the Reformed pastor and doctor, Johannes Baptista Cattaneo.

Johannes Baptista Cattaneo (also Cattani) was born in Lavin, Graubünden, Switzerland, on June 27, 1746, the son of Thomas and Ursula Cattaneo. 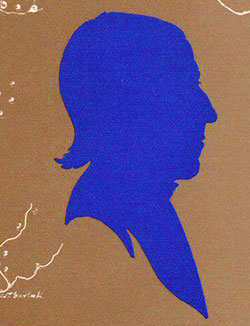 Silhouette (Scherenschnitt) of Rev. Johann Baptista Cattaneo. Image Source: Eine Reise Durch Deutschland Und Russland, Seinen Freunden Beschrieben Von J.B. Cattaneo Aus Bünden, Gegenwaertigen Pfarrer Einer Reformierten Deutschen Colonie Zu Norka an Der Saratofischen Statthalterschaft an Der Wolga in Der Russischen Tartarei in Asien
Cattaneo began attending the village school in Lavin at the age of seven and learned to read, write, sing, and memorize Bible stories. When his father died in 1755, Pastor Sebastian Secca became his guardian and assumed the responsibility for his education. Cattaneo was sent to study at the Reformed theological seminary in Zürich, Switzerland (1765/66), and was ordained on June 26, 1766 in Susch in the Unterengadin Valley, Switzerland. During his university studies in Zürich, he boarded with a physician and acquired medical training, including surgery.

Rev. Cattaneo first served as pastor in Fläsch, Graubünden, Switzerland from 1767 to 1771.

In 1768, Rev. Cattaneo married Barbara Johanna Thomas in Fläsch. She was the daughter of Johannes Thomas and Magdalena Steiner and was born in Lavin, Graubünden, Switzerland, April 17, 1752. 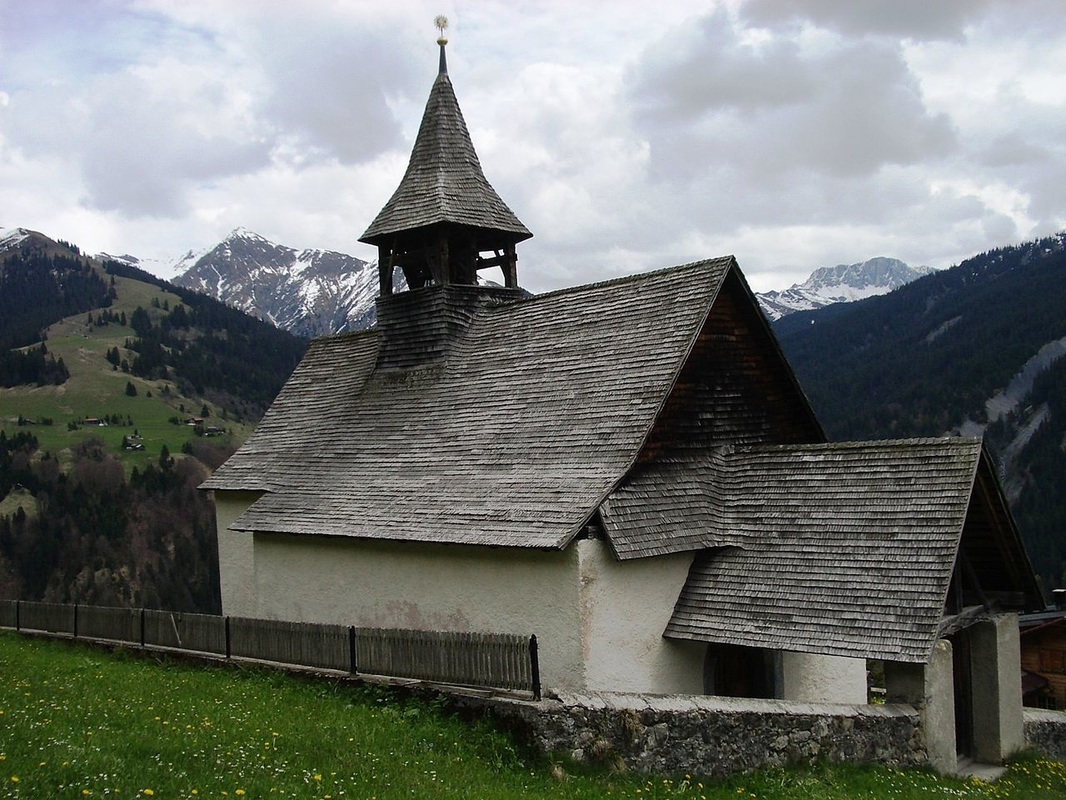 The Saint Anna Reformed Church in Schuders, Switzerland (built in 1502) where Rev. Cattaneo served during 1771 and 1772. Image Source: Wikimedia Commons.
Rev. Cattaneo was called to serve the congregation in Norka, Russia in February 1784. He accepted the assignment and departed for the Volga region with his wife and six children on April 1st of that year.

The Cattaneo's stopped for a short stay in Barby (Germany), which at that time was a settlement for the Herrnhuter Brüdergemeine (Moravian Brotherhood). In 1748, the Moravians leased Barby Castle for use as a theological seminary. In 1765, the Moravians established the colony of Sarepta near the city of Tsaritsyn (now Volgograd) and the Volga German colonies. Many connections between Sarepta and Norka would follow, including the development of the Brotherhood movement and the sarpinka industry.

On June 9th, the family arrived in St. Petersburg and continued on to Moscow which they reached on June 26th. From Moscow, the family continued to Saratov on the lower Volga River. They arrived in Norka on August 3rd and Rev. Cattaneo officially became the pastor of the Norka Reformed church on August 31, 1784.
A son, Lukas Cattaneo, was born on October 30, 1787 and would follow in his father's footsteps.

Rev. Cattaneo wrote the book Eine Reise durch Deutschland und Russland, seinen Freunden beschrieben von J.B. Cattaneo aus Bünden, gegenwaertigen Pfarrer einer reformierten deutschen Colonie zu Norka an der Saratofischen Statthalterschaft an der Wolga in der russischen Tartarei in Asien (“A Trip through Germany and Russia, written for his friends and described by J.B. Cattaneo from Bünden, presently Pastor of a Reformed German Colony in Norka in the city administrative center of Saratov on the Volga in Russian Tartary in Asia”). The book was printed in Chur, Switzerland in 1787.

Under Rev. Cattaneo's leadership the first organ for the Norka church was purchased in 1791.  The organ was previously used in a chapel within Castle Barby, Germany where Rev. Cattaneo had stopped to visit on his initial journey to Norka. In 1801, Rev. Cattaneo was briefly assisted by pastor Karl Jakob Früauf who had served as a teacher in Barby. Pastor Früauf would soon become pastor of the colony Dietel.

Rev. Cattaneo's son Lukas, also studied theology and became a highly regarded pastor and Probst in the Volga German colonies. Lukas returned to Norka to assist his father as the assistant pastor from 1817 to 1821.

Rev. Cattaneo was known not only in German colonies, but also among nomadic peoples, such as the Kalmyks, as a skilled therapist and surgeon. Up to 1819, he successfully performed 16 amputations of hands and legs, 277 operations for cancer and other tumours and inoculated over 8,000 children against smallpox. With his versatile knowledge Rev. Cattaneo helped the colonists with questions about beekeeping, cultivation of plants and agriculture. The Czar presented Rev. Cattaneo with a gilded tobacco canister and the cross of the Order of St. Vladimir for his good works.

In 1821, Lukas Cattaneo was sent to serve the Beideck parish. His father now resumed full responsibility for the Norka parish at age 75.

In 1822, Rev. Cattaneo oversaw the construction of the second church in Norka which was built on the location of the original church.

Rev. Cattaneo also served on occasion in the city of Saratov and the colonies of Pobochnaya, and Yagodnaya Polyana.

An excerpt from My Mothers People by Emma Schwabenland Haynes demonstrates that Rev. Cattaneo could be a firm disciplinarian:

The popular pastor, Rev. Cattaneo, who came to Norka in 1784 had a rather even handed way of dealing with family strife.

Whenever a couple came to him asking for a divorce, he would listen quietly to both sides, and then, since both husband and wife were usually to blame, he would lift a stick which he kept handy for this very purpose, and proceed to give them both a beating. As a result, it is not surprising to hear that during his ministry, divorces in Norka were practically non existent.

Cattaneo's son Lukas returned to Norka due to failing health on February 1828 and remained there until his death from tuberculosis on December 21st of that year.

From 1828 to Rev. Cattaneo's death, he was assisted by Emanuel Grunauer. Emanuel was Johannes' granddaughter's husband.

According to Johannes Preisendorf, on May 4, 1830, 50 rubles were stolen from the church treasury. It is possible that someone took advantage of Rev. Cattaneo's declining health.

Rev. Cattaneo continued to serve the parish of Norka until he passed away peacefully in his sleep on January 16, 1831. His remarkable 46 years, 4 months and 16 days 47 made him the longest tenured pastor of Norka. He made a significant and lasting impact on the colony.

The Memoirs of Johannes Baptista Cattaneo, Pastor of the Reformed Church in Norka, were published in Wolgadeutsche Monatshefte. Berlin: Vol. 2 (1923): 23-25. Print.

Pleve, I. R., and Richard R. Rye. The German Colonies on the Volga: The Second Half of the Eighteenth Century. Lincoln, Nebraska: American Historical Society of Germans from Russia, 2001. p. 319. Print.