​A Tribute to Grandma Weitzel

​Grandma Weitzel really never said much about the family she left behind in Russia. Probably because we never thought to ask while she was still alive.
​ 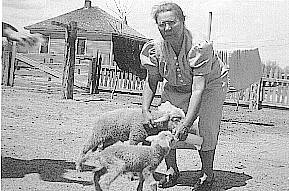 Grandma Weitzel feeding lambs somewhere in West Nebraska between 1920 and 1940. Courtesy of Marven Weitzel.
About 11 years ago, I attended a Weitzel family gathering in Gering, Nebraska. After the reunion, my Aunt Mary, grandma's youngest, gave me an old book which she thought belonged to my grandfather. It was entitled Christlicher Lieder, which roughly translates to "Christian Hymns." More correctly, it is probably a book of psalms. The book was published in Dorpat, Russia in 1893, and was for the use of the Volga German colonists.

Shortly after we got the book, my wife and daughter discovered an old letter within the book's covers. Written in a script which I could not decipher, the letter from Norka, Russia was addressed to Henry G. Weitzel at Minatare, Nebraska. Though I was curious about a 1933 letter written to my grandfather, I always seemed too busy to take the time to find someone to translate it for me.

While working for the Greenville Herald Banner, I mentioned the letter to Uta Knaack, who was writing a column for the paper while her husband, Wolfgang taught math at Boles as part of an exchange program. The Knaacks were from Germany and are back home now. She graciously consented to look at the letter, so after about another week I finally got around to getting her a copy.

In less than a week, I found the copy on my desk with a translation, obviously thanks to both of them. Here is what it said:

God be with me and all of you, amen.

Written by Heinrich Sinner and my wife with 7 children to you dear sister and brother-in-law Weitzel. Now I will announce to you that I still can, God thanks . . .(illegible), what is the best on earth, dear sister Christina.

Now, your brother Heinrich asks you for help, if you are willing and able to help.

Please, do us the favor and open your heart for God's will and help us, dear sister Christina.

I am rather weak and poor and I am starving by hunger, dear sister Christina.

If there hasn't been my parents-in-law, I have been already dead. But they helped me a lot, dear sister. Now I will announce to you that sister Gagas husband has died. Someone takes care of the orphans and the niece is with us in Norka. We are now living together with 17 or 18 persons, open your heart and help your poor brother.

I am so poor and I don't know what to do because of hunger, dear sister, be as good to help us.

Greetings and kisses, and we hope you will write to us soon.

​The day after receiving the translation, I called Aunt Mary in Wheatland, Wyoming, and told her about the letter. She didn't know it was in the book when she gave it to me, but she did remember that Grandma had relatives in Norka.

"My folks sent some money, but they didn't get it," she recalled. "So they didn't send any more."

After reading the letter and visiting with my aunt, my impression of Grandma Christina Weitzel as a selfless, caring individual was reinforced. I can't imagine the helpless feeling she must have had, knowing that her brother and the rest of her family in Russia would soon die of starvation.

Grandma and Grandpa Weitzel left Norka with their children (three at the time) in about 1910 or 1911, and after a two-year stay with relatives at Milow, Germany, came to this country. The family settled in West Nebraska where they worked as farm laborers, living in laborers' quarters at the farm where they worked during summer and fall, and returning to their town home in Gering, Nebraska.

It was a life of hard work for them, probably not much different than what they had in Russia. But, they had a future in this country, something which the Bolsheviks destroyed for the Germans in the Volga area.

Grandma always worked hard, and was always willing to help anyone. On one occasion, several years after the family's arrival in this country, she gave birth to a child in the morning, and was back in the field that afternoon.

Once when my children were small, two in diapers, she insisted on looking after them while my wife and I attended an out-of-town funeral. When we returned we found her all worn out in her favorite chair. About my then two-year-old son, she said something like: "Does that kid ever run down?"

Grandma died in 1968 at the age of 80 of cancer. She was still taking care of a husband (her second) and his son at the time. I guess she finally ran down -- but she seldom complained.

My thanks to Uta and Wolfgang for giving me this moment of reflection.