Given the increase in the population of Norka from 957 people in 1772 to nearly 6,000 people by 1850, it was necessary to find additional land for farming to sustain the colonists.

Neu-Norka (English: New Norka or Russian: Ней-Норку) was officially founded in 1852 although their had been colonists living there since 1847. Neu-Norka was settled entirely by colonists from Norka. During that two-year period, 270 males and 250 females (520 people in total) left the mother colony to pioneer this new settlement. All of the 88 households listed in the 1857 Census of Neu-Norka are shown as residents of Norka (Alt-Norka or Old-Norka) at the time of the 1850 census.

Neu-Norka was located about 57 miles due south of Norka in Kanton Kamenka, Ilovlya District, which was part of the Saratov Province.
By 1857 a school and prayer house (Schule und Bethaus) had been built in Neu-Norka. In 1890, a new school and prayer house were constructed. A photo from 1957 shows that the top floor of the building was removed for unknown reasons. Johann Heinrich Schnell is thought to be the first Schulmeister (schoolmaster) in Neu-Norka. He moved to Neu-Norka in 1852 and died in 1855.

Neu-Norka and Oberdorf were both part of the Rosenberg parish. The majority of the parishioners were of the Reformed faith.

At the time of the deportation in 1941, it is reported that there were 180 farms in Neu-Norka. 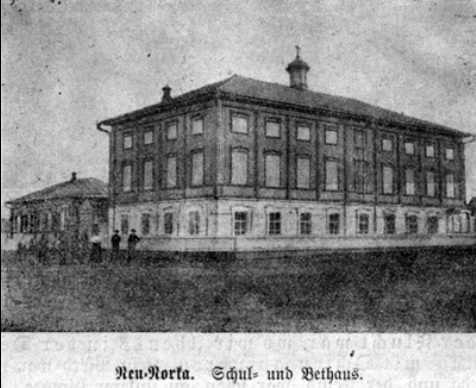 The Neu-Norka school (Schule) and prayerhouse (Bethaus) built in 1890. The 1911 photo is from the "Volksfreund Kalender für das Jahr 1911, Saratow".
Neu-Norka was abandoned in the mid-1980's and no longer exists as a village.

Neu-Norka was the birthplace of the well known pastor and leading advocate of civil rights, Johannes Schleuning.

A list of available church records for Neu-Norka is available on the Research Resources page.

Norka, a.k.a. Norka Novaya, Neu Norka, Shutnikovsky Khutor, Shutka, German colony, Kamyshin uyezd (district), Ilovlya Volost, 150 verstas* from Saratov, 30 verstas from the uyezd city Kamyshin, 5 verstas to the north from the volost village Rosenberg and almost opposite it, 1 versta from the river Ilovlya, on its left bank the colony Alexandertal is situated. It is located 50°20’ north in latitude and 15°2’ east in longitude from the Pulkovo meridian (primary Russian observatory 15 kilometers from St. Petersburg) on the lower right bank of the Ilovlya River. There are two dams on this river. One versta to the North (up the river) from Neu Norka the small river Gryaznovaty Buerak flows into the Ilovlya. In about 1847 several colonists from different villages of Kamenka County founded a khutor (homestead) here. Among them there was Valentine Gette, whose nickname was Shutnik (joker) that is why the khutor started to be called Shutnikovsky (Joker's homestead) or just Shutka (a joke). In 1852, by order of the Office of Foreign Settlers, Germans from the colony Old Norka moved here and the colony got its official name: Novaya (New) Norka.  The crown allotted each resettler with 14.5 dessiatinas** of land according to Census #9; total: 3,597 dessiatinas of convenient land. The resettlers moved from elevated locality by spring water to low locality on the Ilovlya River, dammed with many flour mill weirs. This new climate was unfavorable for the resettlers and 1/4th of them died within 2 years after their arrival here. They are all Germans, Reformists, belong to Rosenberg parish. According to Klaus (Our Colonies, 1869) there were 87 families here, 279 males and 259 females according to Census #10 (1857).

According to the list of settlements of the Central Statistics Committee, published in 1862, the German colony Novaya Norka was shown by the Ilovlya River, 30 verstas from the uyezd city Kamyshin. In 1860 there were in it: 65 households, 289 males and 275 females, total: 564 persons of both sexes; 1 Lutheran prayer house and 1 school. In 1877 2 families moved from here to America. In 1886 5 more families got their passports for traveling abroad.

According to the ownership papers (1871) 284 males mentioned in the census got the following allotment: 3,872 dessiatinas of convenient (including 3,112 dessiatinas of arable land, 81 dessiatinas of meadowland, and 104 dessiatinas of forest) and 1,254.5 dessiatinas of inconvenient land, total: 5,126.5 dessiatinas. The allotment is in one piece. The arable land is situated to the south-west and north-west of the settlement, right behind the pasture. Its farthest end is 7 verstas away. The forest is at the end of the arable land, to the south-west of the settlement, 6 verstas from the colony. Meadowland is to the north, along the Gryaznovaty Buerak River; to the south-east and north-east is the Ilovlya River. The arable land is quite flat, there is one ravine close to the forest, and it’s mowed. ¼ of the soil is chernozem (black earth), ¼ - sandy loam and the rest of the allotted land (1/2) is salty, clay and stony. The subsoil is red clay.  Before 1852 nobody lived here, except a small khutor. Anyone who wanted ploughed the land and they ploughed as much as they wanted: both the Russians and the Germans from nearby villages. When people settled here the land was divided between males, mentioned in census #9. They owned the land in this way up to 1873. After that they started distributing the land between available males, redistributing every 5 years. Outsiders and those who did not live in the colony were not counted. When distributing the land, it was divided into tens – 10 males in each lot. Some land is leased by the community. Ravine mowing (up to 150 dessiatinas) is divided between males owning land. The forest (deciduous forest) – up to 100 dessiatinas is divided between households. The houses are stoked with kizyaks (pressed dung used as fuel); the wood is only used for kindling. Cabbage-fields and potato-fields are also given for 10 people. Barns are divided between households. Those who build new houses get separate space. There is no commune arable land. Russian wheat is the most popular crop, rye is sown only half as much, oats – ¼ of rye, millet – only a little bit. No other cereals are sown. Watermelons are cultivated for their own needs only from 1870s. They are sown in the fallow field and then they would sow rye here and then wheat - two times, then the field is lying fallow again. The land is worked with ploughs. Spring crop is rolled smooth with a wooden roller.

In the 1860s there appeared lots of gophers (ground squirrels). Every person has to bring to the Board 18 gopher’s tails a year, but decrease in their number is not noticeable.

Bread is sold in Kamyshin. There are over 200 dessiatinas of pasture. Cattle graze on fallow fields, meadows and after harvest time – on the stubble-fields. In winter cows are fed with straw, chaff, and bran.

No one rents land beyond the allotment. Some householders rent arable land for tax and duties. To pay commune tax, the community leases land to different people at different prices.

According to 1886 Zemstvo Census there were in Novaya Norka 13 shoemakers, 8 blacksmiths, and 2 traders. There were two bread-reserve stores, 1 trifles store, 3 smithies, 3 joineries, 2 weaving shops, 2 wheelwright’s shops, 5 shoemaking shops, and 2 water flour-mills, one of which is situated on the plot bought by the community and is called Koshkinskaya mill. The main community income is from land lease and 2 mills: one of them is in common ownership with the village Verkhnyaya Gryaznukha; it has 4 mills (scalpers) and is not leased. The other one is not leased and the community hires a miller. Fishing license for fishing on the Ilovlya is only 1 ruble 40 kopecks. In 1885 the community paid 4,056 rubles in tax. There is one church (German) school in the colony founded from the very beginning of the settlement – in 1852. The community has a separate building for it. In 1890 there were 70 boys and 76 girls who studied there. Moreover, September 1, 1886 another school was opened where 17 boys study. They hired a teacher who gets paid 50 kopecks monthly for each student, so that he teaches them in his apartment.

There are about 70 mounds around Novaya Norka. Ilovlya Volost abounds in them. One of them was dug up by the colonists in 1887 and they found small gold things there. Emperor’s Archeology Committee paid 253 rubles for those things to the colonists.

According to Ilovlya Volost Board (1894) Novaya Norka, a.k.a. Neu Norka had community church school, opened in 1852; Baptists’ prayer house, founded in 1890; 1 wine store and 1 trifles store, 1 wind flour mill; 25 wells. In 1894 there were 113 households, 668 buildings, among them: 292 wooden buildings, 376 were made of stone and adobe blocks; most of them had board roofs, about 1/3 of the buildings had straw roofs, and 1 house had a metal roof. The settlement was built according to the plan and is divided into quarters of 4 houses each. There were 662 males and 697 females, total: 1,359 people of both sexes.  They were Germans; all of them make up one village community. Most of them are Reformists, 95 – Lutherans, 57 – Baptists, and 23 – Russian Orthodox. No clergymen live in the colony. The settlers are farmers, besides they are engaged in trade: 4 shoemakers, 1 joiner, 3 blacksmiths, and 3 weavers.

On the territory of Novaya Norka there is one water flour mill that belongs to the community, the mill has a yard with a house for the miller and his helpers. Besides there is one more yard for the leaseholder of this mill with a house and various buildings. In 1894 there were in both yards 8 wooden and 2 stone buildings, where 5 males and 6 females lived. The mill is 4 verstas away from Novaya Norka. Koshkinskaya Mill is also situated on the land that belongs to Novaya Norka community in partnership with the settlers of the colony Verkhnyaya (Upper) Gryaznukha (Ust-Kulalinka Volost) – brothers Weimer. This mill was founded in 1807, there is a farmstead around it, which had 4 households in it in 1894. The 4 households are situated in one row on the lower bank of the Ilovlya River, where there is a mill dam. The farmstead has 18 wooden and 7 stone and brick buildings, most of which have wooden roofs and some – straw roofs. The water mill consists of two separate barns. The farmstead is comprised of 4 dessiatinas of convenient and 3 dessiatinas of inconvenient land. 14 males and 13 females, total: 27 Germans Lutherans live there. The owners of the mill are farmers in the neighboring village Alexandertal. It is considered that it is 5 verstas from here to Rosenberg, 3 verstas to Novaya Norka, 25 verstas to Avilovo Station of Tambov-Kamyshin Railroad, 1 versta to Alexandertal. Saratov-Astrakhan mail road is close to the farmstead.

Eva Bartel (née Schnell) was born in Neu-Norka in 1897 and wrote her recollections on life in the colony:

​Neu-Norka is situated on the western side of the Volga River. It is a large farming colony, not a city, and near the city of Kamyshin. Neu-Norka is about 65 miles south of Norka and 20 miles northwest of Kamyshin.

A farming colony was built differently from a city - it had a different layout. The streets of the farming colony were aobut twice as far apart as those in a city and they had a front and back yard. The back yard was for the cattle. The people all lived in the colony and went out to farm wherever their land was located.

In winter, which was five months long, there was three to four feet of snow on the ground - one of the reasons they all lived in the colony. They had no roads and only sleds for transportation. The wagons were parked out of the way until they could be used again in the spring.

Winter began around the middle of October and lasted until the middle of March. All of the colonists had permanent barns which housed the cattle - both day and night during winter. The people mainly took care of their livestock, as the winter was too harsh for much else. They also did a lot of visiting with their neighbors during the winter months. The colonists adjusted to this environment and did not get discouraged; keeping themselves busy and amused.

The snow would start to melt in mid-March and by April 1st, was mostly gone. The grass was already greening up under the snow and the prairies turned green. According to John H. Bartel (brother of Adam H. Bartel and brother-in-law of Eva Schnell), the prairies greened earlier in Neu-Norka than they do in Kansas. (John settled in Kansas and continued to farm).

Minkh, A. N. Historic and Geographic Dictionary of the Saratov District. Saratov. 1898.