The tradition of Oktoberfest originated on October 12, 1810 in Bavaria to celebrate the marriage of Crown Prince Ludwig, who later became King Ludwig I, and Princess Therese von Sachsen-Hildburghausen. Given that the people who settled in Norka were not from Bavaria and had migrated from the German speaking parts of Europe in 1766, they had no knowledge of Oktoberfest.

Despite the fact that Oktoberfest developed over 40 years after the founding of Norka, the colonists had their own long standing traditions of celebrating the end of harvest season.

After the crops had been gathered and butchering was completed, a festival known as Kerb was celebrated in Norka. After six months of hard labor in the fields, this was a time (especially for the young people) to let off steam. The festival began on the first Sunday in October and lasted three days in which there was a great deal of dancing and merrymaking.

The pagan origins of Kerb originated in the small villages of Isenburg and Hessen where the practice had been common for as long as anyone remembered. In some parts of Germany and Northern Europe the festival is also known as Kermis. 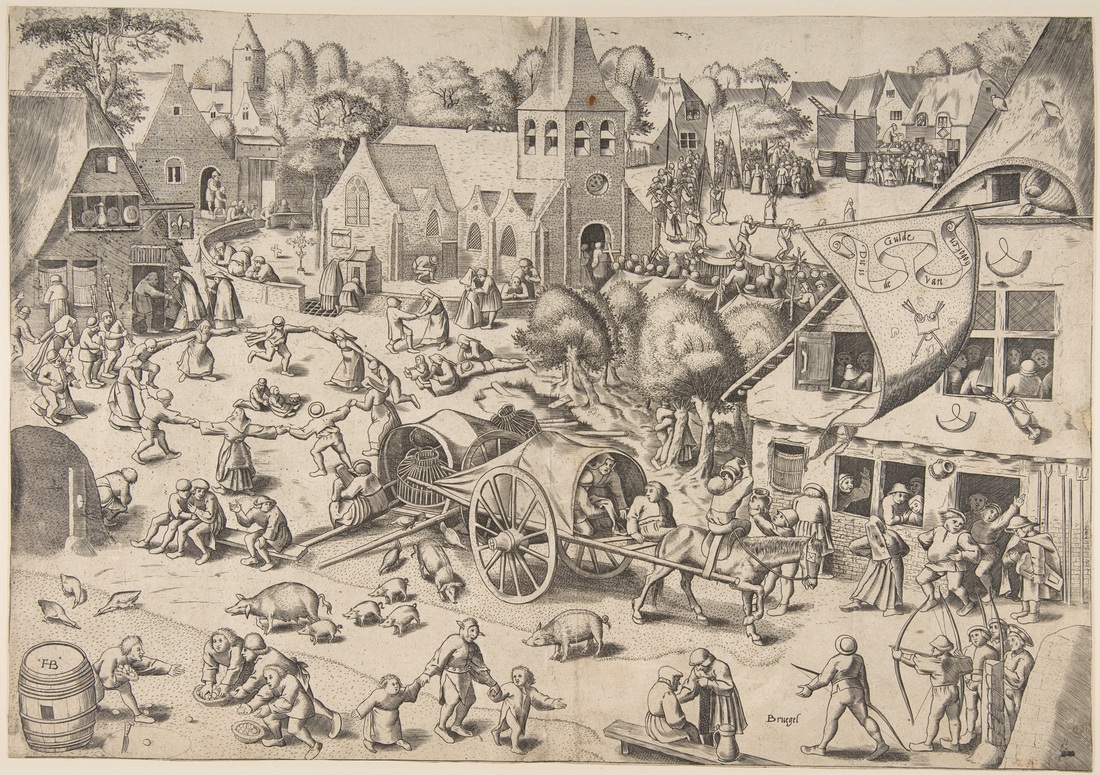 "The Kermis at Hoboken" by Pieter Bruegel (ca. 1559). Source: The Museum of Modern Art Online Collection, Harris Brisbane Dick Fund, 1926.
In the Middle Ages the popular Kerbfest was adopted by the Catholic Church and given a new meaning, a religious celebration called Kirchweih, which marked the anniversary of a church's consecration. Over time, the religious nature of the holiday was lost and the Kerbfest once again became a secular tradition.

The holiday was frowned upon by the church leaders and the Brotherhood which meant that no public places were available. As a result, rooms in private homes were cleared for the festivities. Bands played folk music (Kerwelieder) and great quantities of food and drink were consumed.

In his memoirs, Conrad Brill provides an overview of the Kerb celebration in Norka:

Different families would use their houses for harvest celebration ceremonies which lasted from three days and nights to a week.  In our neighborhood it was usually held at "Dicker" (rotund) Helzer’s home.  He would take the windows out of the house and put them into the barn for safe keeping, lay in a supply of liquor and hire a band.  The participants would pay so much for a set of music which paid the musicians, who collected from dancers after each set.  Helzer sold the drinks and kept order with a scale stock about the size of a baseball bat, which he actually used if things got out of hand.  Different villages went to different extremes.  I have heard of non-alcoholic Kerb celebrations, but in the Unterdorf (lower village) they were rough and rowdy, as well as long remembered.  The celebration usually started after church on Sunday, with street singing and marches to the place of celebration.

Brill also notes that the Kerb festival in the Mitteldorf (middle part of the village) was held at a Sauer family house. This man was nicknamed "Kerb" Sauer.

It was said that youthful encounters during the Kerbfest would sometimes lead to unplanned marriages in the winter months.

Although church leaders opposed the Kerbfest, they supported a more temperate Harvest Festival which was held concurrently. The Harvest Festival in Norka included an annual public market (Jahrmarkt) where all types of goods could be bought and sold.

As severe famine began sweeping through the Volga region in October 1922, Norka Pastor Friedrich Wacker wrote about the changing nature of the Harvest Festival and Kerbfest after the Bolshevik Revolution:

On October 1st we, along with the Evangelical Christian community, celebrated the Harvest Festival. (We generally celebrate all Christian celebrations according to the new style calendar since its introduction.) In bygone days Norkans combined the Harvest Fest with their Kerb -- for each village it was a joyful folk festival.

The market stalls on the well-field were full of goods and a bustling market was going on in this otherwise quiet place. The houses of the village were neatly cleaned inside and out in preparation for Kerbfest, the housewives prepared special baked goods for these days and also other appetizing foods which they shared with guests who had come from afar. The youths also sought opportunities to have some fun but such opportunities were not always pious.

Since then everything has changed. The market stalls are no longer there. When the Revolution ended private trading, exchanges in the public market stalls was no longer possible. The boards from the stalls were hammered loose and taken away, some to be used for coffins. Finally it was directed that all should be torn down and the boards used to repair the schoolyard fences. The emergency caused other festive aspects of the Kerbfest to disappear also --yes, and they were not always clear about when to celebrate. Thus part of the populace has for years celebrated a quiet Kerbfest according to the old style date and the others according to the new style date. Against all that, this year's Harvest Fest was nevertheless still one that all could take pleasure in, even if the harvest of commodities, on average, was only a modest one.

The tradition of Kerbfest continues to be celebrated in Germany and South America.

Koch, Fred C. The Volga Germans: In Russia and the Americas, from 1763 to the Present. University Park: Pennsylvania State UP, 1977. 192-94. Print. <https://play.google.com/store/books/details?id=rzJh_whDGmIC>.