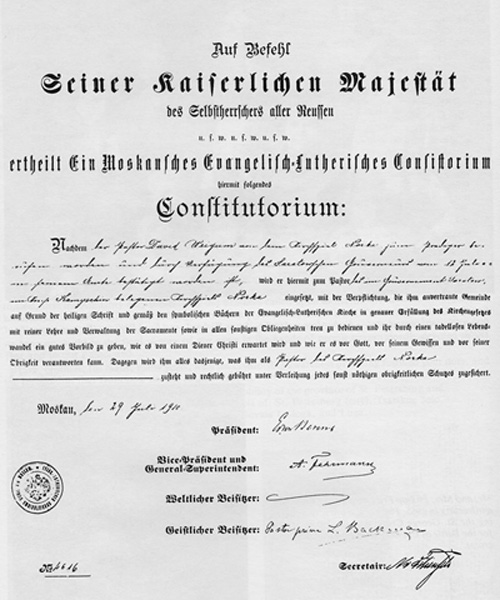 This was the standard form of appointment for all pastors under the jurisdiction of the Moscow Evangelical-Lutheran Consistory, which included those serving in both Lutheran and Reformed parishes in the Volga region. The appointment, formally, came "on command" of the Tsar himself, His Imperial Majesty, the Autocrat of all the Russians, etc., etc., but was made through the Moscow Evangelical Lutheran Consistory. Translated from the Russian, the document reads as follows: Pastor David Weigum, having been called as preacher by the parish of Norka and having been confirmed in office through an order of the governor of Saratov on 12 July of this year, is hereby installed as pastor of the parish of Norka, situated in the Kamyshin district of the province of Saratov, with the duty to serve faithfully the parish entrusted to him, on the basis of Holy Scripture and according to the liturgical books of the Evangelical-Lutheran Church, in exact fulfillment of church law, with pure doctrine and the administration of the sacraments, and in all other obligations, and to give good example by an irreproachable life, such as is expected of a servant of Christ and such as he can answer for before God, his conscience and the authorities. In return he is assured of all the rights that are his as pastor of the parish of Norka and is granted all the needed protection of the authorities. Moscow, 29 July 1910. Seal of the Ev.-Luth. Consistory Signatures of Consistory Officials Pastor
​During the three years that Pastor David Weigum served Norka, Pastor Wilhelm Stärkel, who had been pastor in Norka from 1878-1908, was still alive and living in retirement in the Norka parsonage. The Weigum children, so Dr. Walter Weigum informs us, were fond of the old man: "he had himself become somewhat childish and was obviously a good playmate." 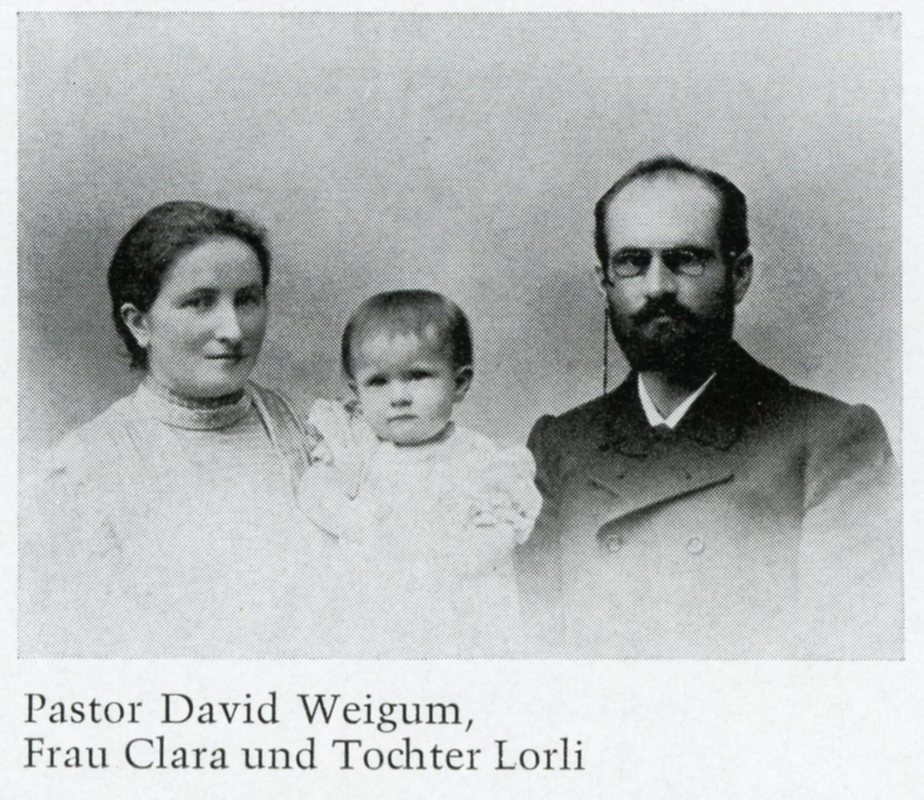 Photograph of the David and Clara Weigum family. Source: "Die Kirchen Und Das Religiöse Leben Der Rußlanddeutschen".
In 1913, Rev. Weigum moved to Appenzell, Switzerland, from where he served the Reformed diaspora congregation in Appenzell-Inner-Rhoden until his retirement in 1937.  In retirement, he lived in Riehen, near Basel, Switzerland. He died in 1952.

Weigum wrote a book titled "My Home on the Crimean Steppe". This book is a translation of his German manuscript, "Aus Heimat und Leben," edited by the author's son, Walter Weigum, who contributed the Introduction. The book is a look at everyday life in Ludwigstal, a German village in the Crimea, in the 1880's. The author later became a pastor in the Reformed Church and served in the Black Sea and Volga regions. Many of his relatives came to America during the years 1891 to 1912. The book includes maps, pictures, and a genealogical appendix.