Norka was one of the 104 Mutterkolonien (Mother colonies) established on the Volga. The planning and recruitment of the colonists was organized directly by the Russian government. These were known as Krone Kolonien (Crown Colonies) in contrast to those colonies settled by private recruiters. 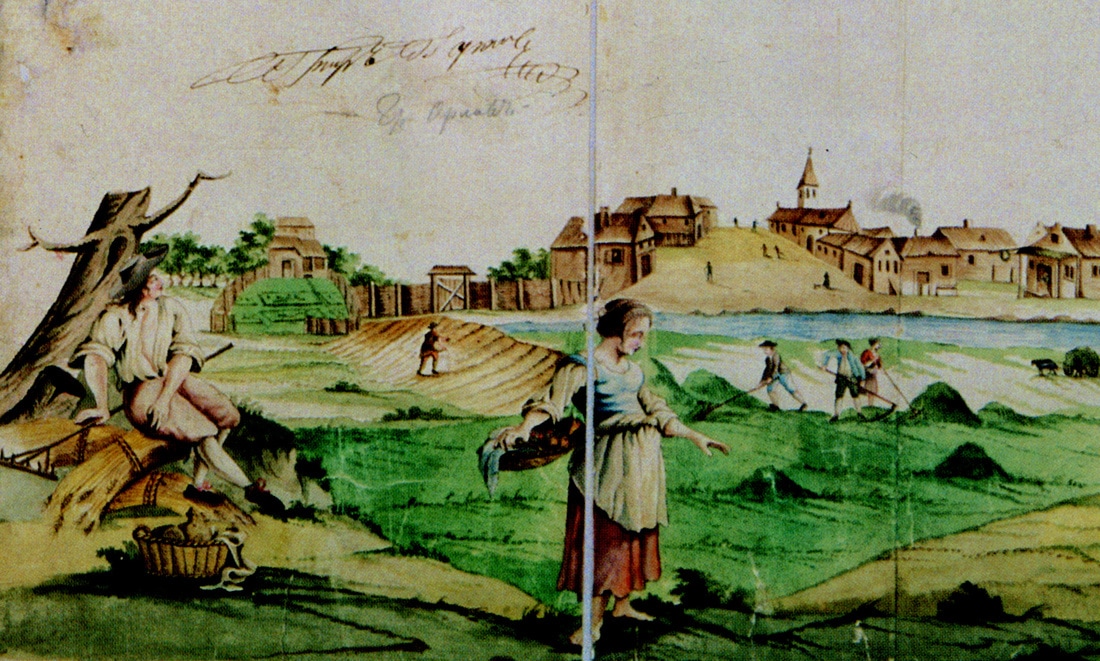 Artwork from an idealized 1760's map depicting life in the Volga German settlement area. The full map can be purchased from the American Historical Society of Germans from Russia.
After more than a year of very difficult travel from their homelands, the colonists arrived in the frontier town of Saratov in early August 1767. During a brief stay in Saratov, each household was provided with 25 rubles, wagons, saddles, horses, cows, timber, and other necessary items. These items were provided in the form of a loan to be repaid to the Russian government after ten years in three equal installments. The government established the Saratov Office for the Guardianship of Foreign Settlers (known as the Kontora) to monitor and assist the colonists as needed.
From Saratov, the colonists continued under the escort of Russian military officers to the banks of the Norka River. The first transport group arrived at the settlement site on Wednesday, August 15, 1767.*  This group comprised the majority of the first settlers including the three original Vorsteher (group elders or leaders):  Johann Conrad Weigandt, a stocking maker from Bönstadt, Isenburg, Johann Heinrich Brill a stonemason from Neuenschmidten, and Philipp Peter Roth a farmer from Pfalz. All three of these men arrived together at Oranienbaum aboard the Russian pink "Slon" (the Elephant) on August 9, 1766. 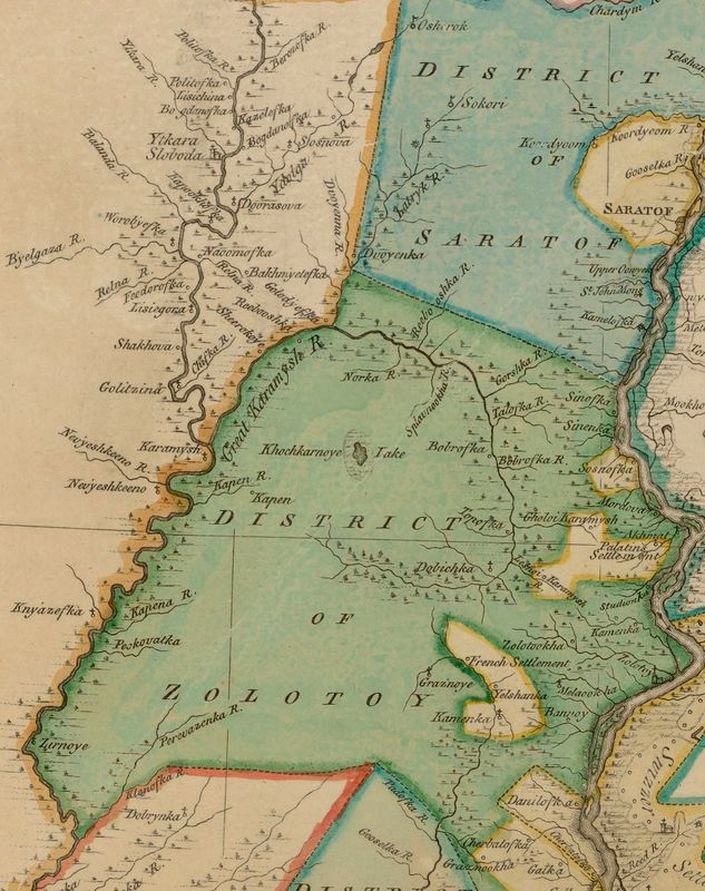 Section of a 1765 map titled "A most accurate map of those parts of the Astracan government upon the river Wolga where in the new colonies are settled, taken from original drawings & observations made in a late survey of those countries" by James Mynde. The map was produced before the colony of Norka was founded in 1767 at the headwaters of the Norka River which is depicted on this map. Several German colonies founded in 1764 are shown including: Sosnovka (Schilling), Gholoi Karamysh (Balzer), the Palatins Settlement (Anton), the French Settlement (Franzosen), Kamenka, and Galka. Source: Gallica website
In the remaining days of August and the month of September, more immigrant families continued to arrive in Norka. Four more groups arrived on August 18th, August 26th, September 2nd, and September 22nd. The 1767 census list indicates that there were 218 households comprised of 738 people living in the colony at the end of September 1767. These people were the founders of Norka. At the time of the census, the three original Vorsteher had been replaced by one, Konrad Müller and four Beisitzer: Nicolaus Schilling, Johann Heinrich Lohrei, Jacob Pluket and Johannes Hölzer.

Risking everything for the promise of a better life, many families arrived intact. Others had suffered the death of a spouse, a child, a parent or some unthinkable combination. Some children arrived as orphans, kindly adopted by another family. Some of the adults arrived as widows or widowers, their family members decimated along the way. Some married or remarried during the long journey to the Volga region and were beginning a new life. Children were born, the first generation who would only know their Russian homeland.

The colonists who settled in Norka were primarily adherents of the Reformed faith, although a small group of Lutherans and two Catholic families were also listed in the 1767 census. The majority of the colonists had origins in the county of Isenburg or the duchy of Hessen. Igor Pleve states that Norka is a rare example of a colony where the majority of the colonists came from the same region or county in the German speaking lands of Western Europe. Pleve believes this cohesiveness allowed colonies like Norka to more quickly establish sustainable economic activity. The historian Jakob Dietz called Norka a "happy exception" and a "shining example" of a successful colony.

Norka was among the last colonies founded in the Volga region. Dobrinka was the earliest colony to be established on June 29, 1764, over three years earlier.

Since Norka was a Crown colony, it is possible that a number of log houses known as Krone Häuser (Crown homes), had already been built by the government when the colonists arrived. The number of houses may have been inadequate to shelter all the colonists in the first winter. Some family stories tell of their ancestors building huts that were partially underground, known as Zemlyanka, in order to live through the first winters until more housing could be built. 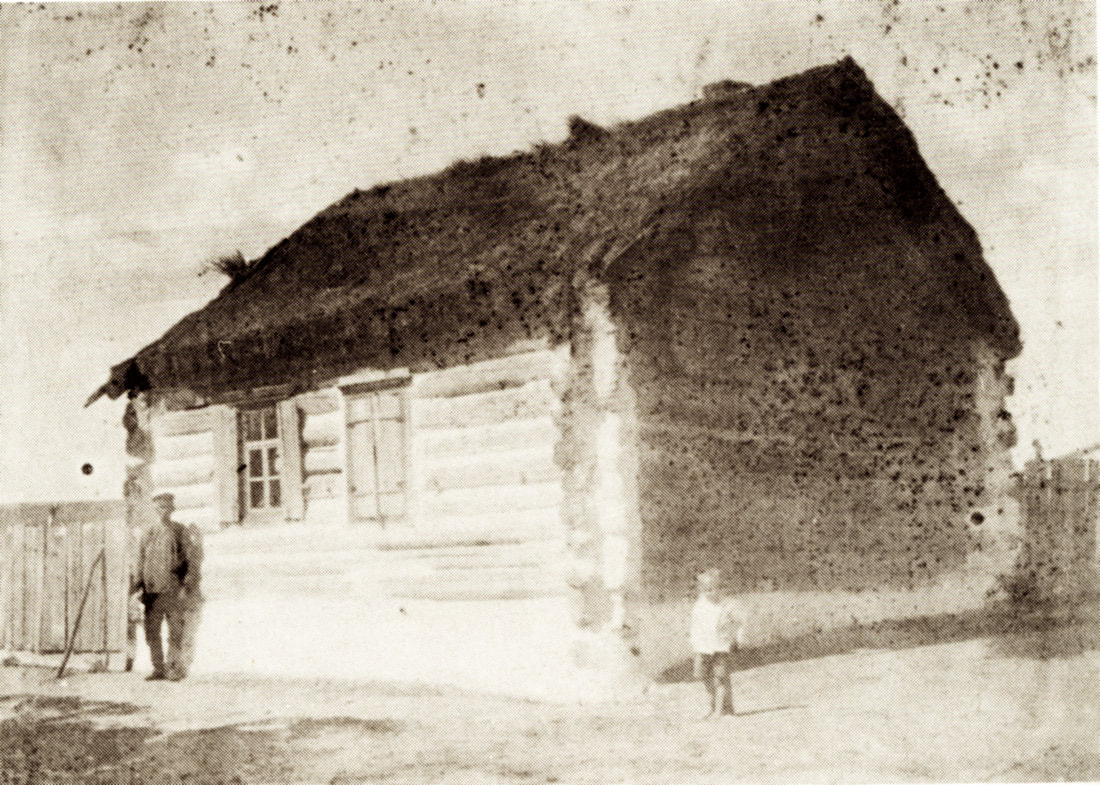 Photograph of an original colonist house in the nearby colony of Frank. Source: "Heimatbuch 1982-1984".
The colonies were given a numerical designation before receiving an official Russian name. Norka was labeled as Kolonie 3 on the earliest known settlement map. Rather than accepting such a bland designation, the founders originally called their new settlement "Weigandt" in recognition of Johann Conrad Weigandt, one of the first Vorsteher (leaders) of the colony. On February 26, 1768, the Kontora issued a decree that all of the German colonies be given a Russian name. With the exception of 8 colonies of the original 104, the colonists continued to use the German place names, rather than the Russian. The colony of Weigandt was one of the exceptions and it is likely that from this early stage of settlement that "Norka" became the accepted name.

In the years after its founding, August 15th was commemorated as a public holiday in the colony known as Herkomst Tag (Founders Day). On this day they gave thanks for their survival and remembered those who died along the way.
*Norka's founding date of August 15, 1767 was a Wednesday under the Julian calendar which was used in the Russian Empire during this time period. The date calculation was performed at CalendarHome.com.

Baumung, Alexander. Translation and index of the 1767 census revision. Oct 2019.

Pleve, I. R., and Richard R. Rye. The German Colonies on the Volga: The Second Half of the Eighteenth Century. Lincoln, Neb.: American Historical Society of Germans from Russia, 2001. 137. Print.