Immigration to the United States

Based on favorable reports from the scouts sent to America in 1874, and through the personal experiences and encouragement of Rev. Stärkel and others, a small party of seven families and two single men were the first Volga Germans and the first people from Norka to immigrate to the United States in 1875. They likely traveled by train from Saratov to one of the Northern European ports. Worries and doubts about being successful in America were on their minds. The emigrants also worried if their sea-traveling papers were in order, and if the ship’s surgeon might reject them for health reasons. This group sailed from Liverpool aboard the steamship City of Brussels which made a stop in Queenstown, Ireland before arriving in New York harbor on June 28, 1875. At least five of the seven Volga German families onboard this ship were from Norka.

According to Dr. Ruth Schultz, Johann Georg and Elisabeth Schreiber were the parents of the first child (Helena) of Volga German descent to be born in America. Elisabeth must have been pregnant on the journey as Helena was born in September 1875.

Dr. Schultz also reports that during the 1874-75 biennium, 89 people emigrated from Norka to the Americas. This was a very small percentage of the Norka population at that time.

The steamship Oder, sailed from Bremen, Germany and arrived in New York on July 8, 1876. Historian, Hattie Plum Williams, reports that:

"Eight-five families, mostly from the colony of Norka, but included some from Balzer, gathered at Saratov and journeyed to Bremen from which they sailed for the United States landing at New York, July 7, 1876... Some of them were persuaded to go to Milwaukee, Wisconsin, on the grounds that there were many Germans there, but they did not stay long, coming to Sutton the following spring. Another group of thirty families was taken to Kansas free of charge by the Santa Fe Railroad, and while waiting at Atchison, one carload was stolen by the Burlington and Missouri immigration agent and sent to Sutton, Nebraska. The remainder was taken to the immigration house at Pawnee Rock in Barton County, Kansas. They got in touch with the Burlington and Missouri land agent in Lincoln where they purchased land along the Turkey Creek not far away from Friend. Another group was brought to Red Oak, Iowa and many of these settled in Harvard, Nebraska. But before long, Lincoln became the center of Protestant Volga Germans because of its greater opportunities for employment. From this city many people moved on to new homes in Portland, Oregon, Denver, Colorado and other points in the west." 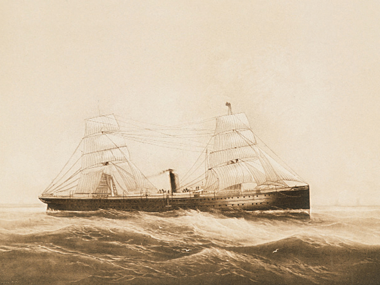 Image of the steamship "Oder" from the Hapag-Lloyd website.
Aboard the Oder were the Johann Heinrich and Margaretha Traudt family. 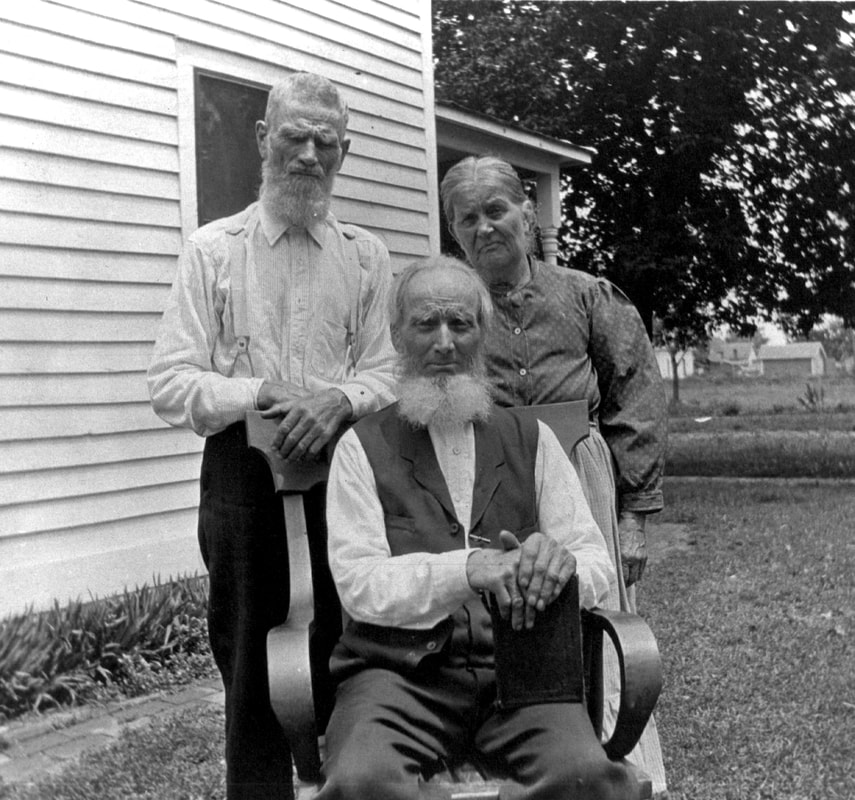 Standing: Johann Heinrich Traudt (b. 1842), his wife Margaretha Traudt (née Hamburger - b. 1850). Seated: Heinrich's brother, Johann Nicolaus Traudt (b. 1844). They were among the first Volga Germans to arrive in the USA in 1876.
On July 29, 1876, the Mosel arrived in New York carrying immigrants from Norka.
On December 8, 1876, 53 people from Norka arrived in New York on the steamship Frisia which had sailed from Hamburg, Germany and Le Havre, France. The families and individuals on this ship included the Krieger's (14 people), Scheidemann (6 people), Spady (1 person), Bartel (1 person), Schwindt (2 people) Wolf (1 person), Seder (3 people), Schreiner (3 people), Döring (1 person), Schnell (2 people), Repp (6 people), Traudt (5 people), Hefeneider (2 people) and Schreiber (6 people).
Immigration to the United States increased during the late 1800's as a result of the severe famine from 1891-1892.  The outflow of emigrants from Norka continued until the early 1900's when World War I and the Bolshevik Revolution stemmed the flow. Migration in smaller numbers continued until the early 1920's when leaving the Soviet Union was all but impossible.

First hand descriptions of the journey from Norka to America are rare. We are fortunate to have a letter written by Carl Krieger about his travels in 1890 which vividly describes his experience.

Norka Immigrant Settlement Areas in the United States from 1875 to 1920:

Karlin, Athanasius. "The Coming of the First Volga German Catholics to America." Journal of the American Historical Society of Germans from Russia (Winter 1978): 61-65. Print.