God’s mercy and peace unto you. A cordial greeting and kiss of love from your beloved parents Carl and Christina, to you beloved children, Conrad and Marie.

We are so well, like the old people are. I have a cold and cough and mother also has a cold. We were delighted to receive the letter from you on January 20, also the birthday present with five dollars. Thanks very much for it.

We are having cold weather at present, 10 below zero.

Mother hears poorly and my eyes are weak, that I can hardly see the lines; however I am grateful to God that I can still see.

You would like to hear about the old times. One should have that written down.

Now, May 1, 1890 we are to leave Norka. There were wagons ready to depart.  Mother's brother, Johannes and his mother, the wagons standing in the courtyard and the children on the wagons. There was Peter’s brother-in-law with one wagon and Peter’s son, Conrad, with 3 wagons, ready to depart.  A brother from Huck was there.  He had bought a black stallion and a small wagon and a watch dog.  Everything was ready to go.

Many brethren were there. Outside in front of the door, we sang first. I led the singing after the prayer by Brother George Krieck from Huck.  Then the door was opened and the wagon train started off.

The whole courtyard was filled with people and the roofs were seated full. The brethren accompanied us out of the village.

Norka was large, 11 double rows and we lived in the 8th row above the church. The village was 3 miles long.  Then, once more, I went to see my father’s brother, Conrad, who was blind, to say farewell.

Beyond the village I came again to the wagons, there again, they stopped once more to say goodbye forever and so far I had not shed a tear.

Then we went on to Saratov. There we had to wait one day. The next day we went to the railway station, there we waited for the train. When the train came, then we mounted up.

Over there (Russia) is not like here, that one can get near the train.  There, they have a 6 foot high fence. Anyone not getting on the train must stay outside.

The friends outside the fence wept in their handkerchiefs and shed tears.

Drader had an officer’s overcoat. It was my father's. He had given the overcoat to his son, Peter. Peter’s father-in-law had taken it and said that Peter had given it to him. Peter had to have a letter from his father in America first, and then Peter obtained his overcoat.

I came back again to Krowna, there our passes were approved. Uncle John did not have a pass, so he was smuggled over the border. The Jews did not work at nights, as father stayed behind until John arrived, then he went on.

We continued to Berlin. There is a very large depot in Berlin. It had a glass roof and the entire train went under the roof but we were not allowed to get off.

Those who were going to America went west from the depot to a depot underground. There we descended and went down in the depot. Many people were there.

We had to wait until our trains arrived. Father and I went downtown in Berlin and down the stairs to the lower section. There at the end was a small cabin. We went in and father had a conversation with a man. He gave us a glass of beer or brandy, and then we went back to the railway station.  Then we went on to Hamburg where we stayed overnight until the next day when our father arrived, then we continued on our way - Uncle Peter, with a family of 7, our family of 7, Uncle Scheideman and family and Uncle Henry Krieger and family.

Then we got on the train at 9 and traveled about 50 miles until 10:30, and then we boarded a small ship.

The large ship waited far out in the sea at anchor.  Then the ladders were put up and we entered the large ship.  We four families in one room, on one side.  Two beds clear through the room with boards on each side and between two people, one board.  The name of the ship was Augusta Victoria. (Note: Carl Krieger was aboard the steamship Normannia, not the Augusta Victoria. Both ships were owned by the Hamburg America Line.) 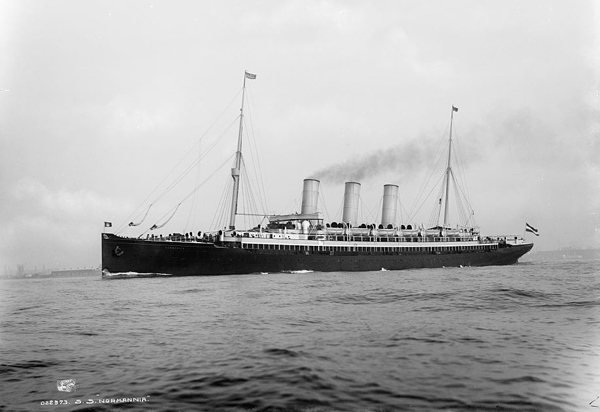 The steamship "Normannia." Image courtesy of the Library of Congress.
Now we are on the ship at noon.  On the south side we saw France and on the other side, England.

Near England the ship anchored.  On the water more people came from England to board the ship, and then the ship began to move upon the great sea.

The first day went fine.  Also the second day.  On the third day, one could only see water.  Then we saw a great iceberg, as large as the Dutton building (in Hastings, Nebraska) and felt cold air.  The ship began to shake to and fro, then there were many sick people.  They were always throwing up.  They all lay upon the deck, except I and Uncle Henry.  We were preparing food.

Uncle Henry’s grandmother also lay on her bed.  I have her food.  She had eaten very little, then it came up again, right in front of me where I was standing.

The ship gave a jerk, the floor was smooth and I fell on the floor.  Then I was angry and said, “When you cannot keep it down, stop eating.”  I was punished at once.  Then the ship gave another jerk and I flew away out about 15 feet.  I had had nearly fallen myself dead.  I crawled on the bed and wept.  My head was broken.

The next morning, at 6, it was foggy.  We were all below the ships deck and it was cold. The ship had slowed down; all at once the ship gave a crash.  It was a collision with a big iceberg and had broken the railing on the south side. (Note: On May 27, 1890, the Normannia reported striking an iceberg. )

Behind the kitchen and toilet there was about 10 tons of ice on the ship. A 10 year old boy had been hit on the head by the ice.

The ice had done no other damage. Then we went on toward the harbor at New York. Then the doctors from New York came on the ship. 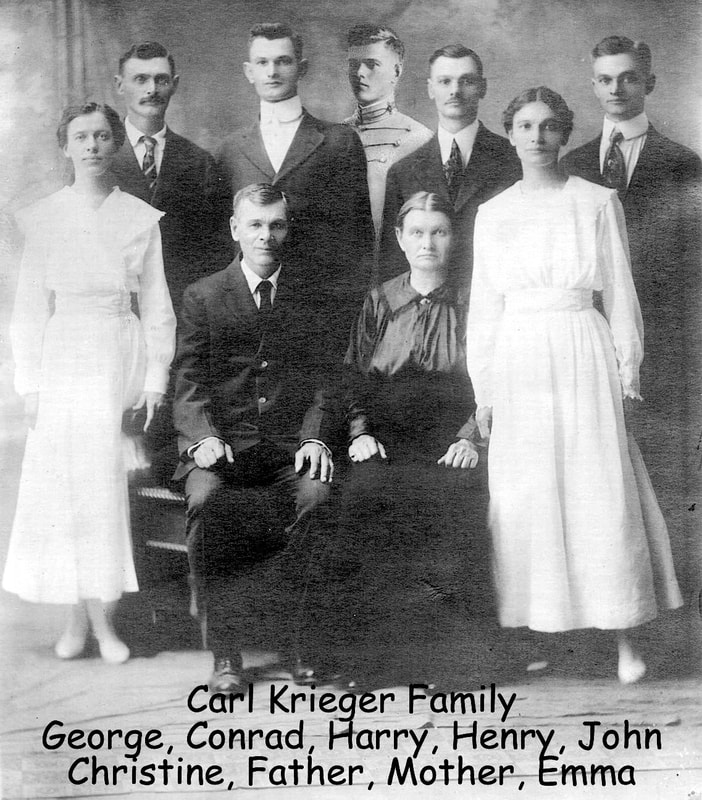 This letter was written by Carl Krieger, in the German language, on January 29, 1936 in Hastings, Nebraska. The letter was addressed to Carl's son Conrad and his wife Marie Krieger, who lived in Washington, D.C. The letter describes Carl's journey from Norka to New York in 1890. Carl arrived at Castle Garden on May 31st aboard the steamship Normannia along with several other families from Norka (listed "Carl Krueger" from "Norga" on the ship records).