Johannes Krieger was born in Norka on June 8, 1826, the son of Melchior Krieger (born September 2, 1778) and Anna Maria Schäfer (born August 20, 1782). Melchior Krieger and his descendants were known as the "Lechai" Krieger's. The origin of this Spitznamen (nickname) comes from Melchior's wife, Anna Maria Schäfer. Anna Maria was the daughter of Johann Peter Schäfer and Anna Maria Schreiner. Johann Peter's father died and he became the step-son of Joseph Lechai who was among the founders of Norka. The name Lechai (often spelled incorrectly as Lickei, Likai, Licki) was used to distinguish this Krieger line from many others. 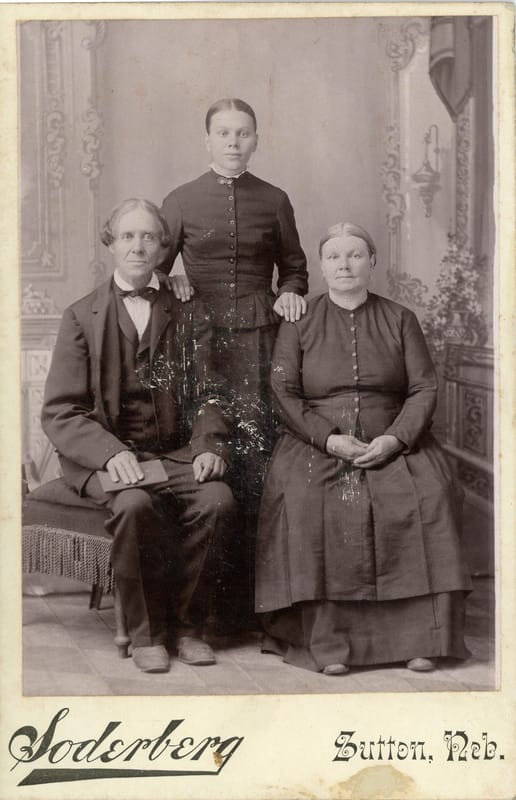 Portrait of Johannes and Katharina Maria Krieger and their daughter, Katharina Elisabeth, taken in Sutton, Nebraska. Photo courtesy Jerry Krieger.
Johannes was known by the nickname of Lechai Hannesse or Lechai Johannes.

In 1874, Johannes, along with fellow Norkan Johannes Nolde, were among the fourteen scouts who were selected by their fellow Volga German colonists to determine if migration to the United States was desirable. The positive reports delivered by Johannes and the other scouts upon their return to Russia triggered a large scale migration to the United States and Canada beginning in 1875.

After returning to Russia, Johannes continued his former life in Norka. Katharina Maria gave birth to twelve children, but only seven lived to become adults.

Johannes served as a deacon in the Norka church for years. When the new church was built in Norka (about 1882) he acted as overseer during its construction.

In 1890, Johannes, Katharina Maria and five of their seven children immigrated to the United States.
Two of their sons, Peter and Carl, along with a son-in-law, Heinrich Krieger (a distant cousin married to Katharina Elisabeth), were the first to arrive in New York on May 31, 1890 aboard the steamship Normannia which sailed from Hamburg, Germany. It is believed that Johannes, Katharina Maria and three of their children were delayed for a week in Hamburg because their married son, Johannes and his wife Catharina and son Conrad, had passport problems.

Johannes, Katharina Maria, their daughter Katharina Elisabeth, their married son Johannes and his family, and a second unmarried son named Johannes, arrived in New York on June 6, 1890 aboard the steamship Wieland .

The family settled in Sutton, Nebraska and Johannes worked as a shoemaker and farmer. During the last 13 years of his life he suffered from blindness, a condition that also afflicted his brother Conrad. A granddaughter, Amelia Werre, tells an interesting story related to his loss of sight:

​On Sunday afternoons, the Brethren gathered in homes for prayer meetings and Bible discussions. Following the close of meetings, the Brethren often discussed local happenings and sometimes even the Royal family came into discussion. At one of these meetings, one of the Brethren made an uncomplimentary remark that every time a princess was born, a large sum of money was settled on her. One of the Brethren reported this disloyal remark to the authorities who came to investigate and question all the Brethren who had attended the meeting. When grandfather Krieger was questioned, he being on the alert and not wishing to put anyone into a grave situation, replied that the prophets in the Old Testament had been discussed. The informer being discredited was sentenced to exile in the salt mines in Siberia. He was so enraged that grandfather "let him down" that he wished that he would go blind. In Sutton, Nebraska, grandfather plied his trade of a cobbler. Working with poor lighting facilities (candle or kerosene lamps), he eventually became blind and sat in darkness for thirteen years till his death in 1910. One cannot help but wonder in those long years, sitting in darkness, whether the curse wished on him did not often come to grandfather's mind.

Johannes Krieger and his fellow scouts will be long remembered for their role in triggering the mass migration of many Volga Germans to North America. In doing so, they changed many lives for the better.

Hoelzer, John. "The Earliest Volga Germans in Sutton, Nebraska and Portion of Their History - From the Illustrierter Kirchenbote Kalender, 1927 ." Work Paper #16 of the American Historical Society of Germans from Russia (December 1974): 16-19. Print.

Werre, Amelia. "A History of the Krieger Family from Norka, Russia."