According to Volga German historian Igor Pleve, schools arose in the first year the colonists arrived on the Volga. In the first years of settlement, instruction of children from age 7 likely took place in private homes. By 1771, the colonists had constructed a wooden parochial school building which simultaneously served as a prayer house. Soon afterwards a church was built. The establishment of the school and church was performed under the leadership of Pastor Johann Georg Herwig.

​The first school in Norka were established by the church who owned and operated it for the benefit of the colonists. The church school made it compulsory to start classes at the age of seven and students were permitted to leave at the age of fifteen. The schoolmaster worked under the supervision of the pastor of the church.

The 1798 Census report for Norka made by the Russian Collegiate Assessor, Cavalier Sixtel, states that:

​They have here their own pastor and parish church.  Small children are taught reading, writing, and religion by a schoolmaster in a specially constructed school building. 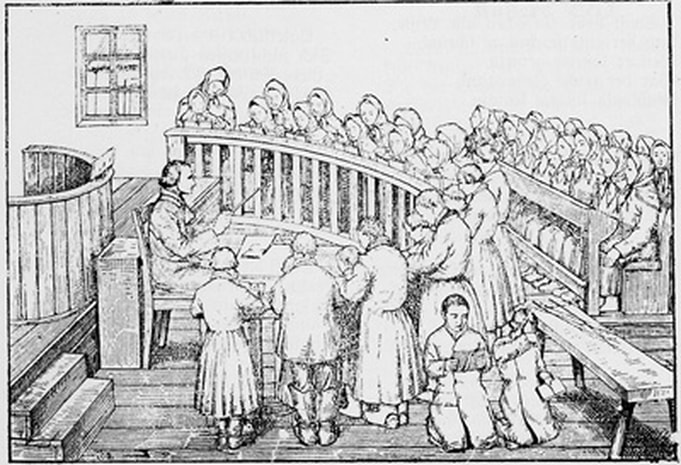 Drawing of a typical Volga German classroom. Source: "Das Lied vom Küster Deis" by David Kufeld, published 1914.
Until 1861, the colonists alone had to provide the resources for their education system. A new Russian school was established in 1868 next to the church.

In 1890, a law was passed that required compulsory Russian language classes. From that time on, the Mitteldorf school had two German teachers and two Russian teachers.

By 1894, there were three schools in Norka: the parochial school, the government supervised school, and a private cooperative school.

A. N. Minkh, in his description of Norka in 1898, also states that there were three schools in the colony. The schools were named for their location in the upper, middle and lower part of the colony. As a result, the names given were the Oberdorf Schule, Mitteldorf Schule and Unterdorf Schule.

In 1906, pastor and church leader, Johannes Erbes, reported that of the 13,336 residents living in Norka, there were 1,075 children between the ages of 7 and 15 who were required to attend the government school. This school had three classrooms. He also noted that in contrast to other German colonies, attendance in Norka schools was nearly 100 percent. That same year, the church school enrolled 443 boys and 482 girls. Seven parochial school teachers taught in one large classroom.

During the Soviet era, all three established schools were closed and reconstituted as two elementary schools and one middle school. All of the schools and teachers were under government control.

Berta Schreiber (born in November 1914), a former teacher in Norka, recalls that there was a total of five schools in the village. Berta's mother told her that the fifth school, known as the Klunden Schule, was privately operated by the Klund family. 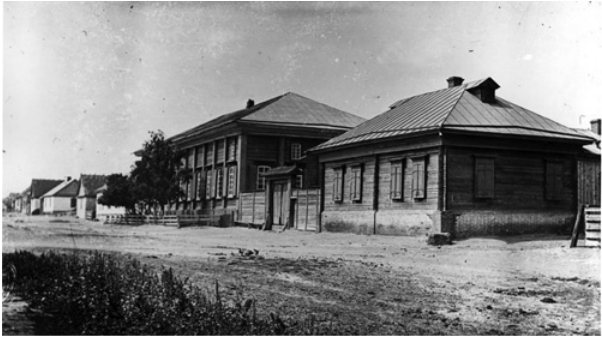 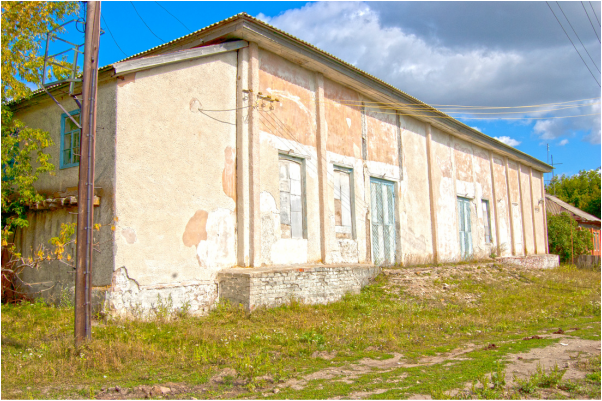 The Norka Mitteldorf school in 2006. Now a "house of culture" and village museum. The schoolmaster's residence is shown at the far right of the photo. Photograph courtesy of Steve Schreiber. 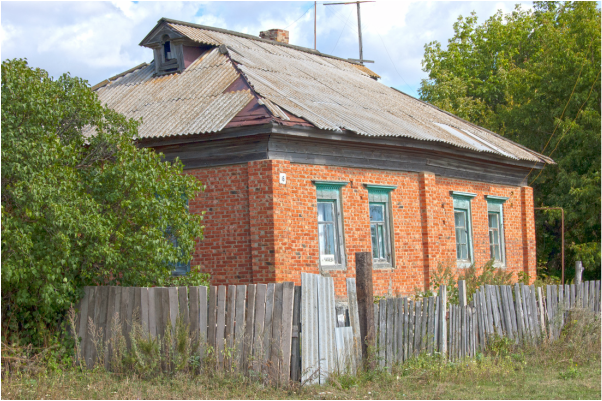 Former schoolmaster's residence in Norka (2006). Brick has been applied to the exterior of the original wooden structure (see photo above). Photograph courtesy of Steve Schreiber.
Norka native Conrad Brill recalls:

Two of the older Norka schools were replaced with new ones in about 1915.  One in Oberdorf, and one in Unterdorf.  The new and larger Russian school had been built next to the church in 1905 when we were ordered to learn the Russian language along with the German we had been wholly learning previously.  The old Unterdorf school in my school days had been known as the Kaiser school. It was because it was located next to the property of a family named Kaiser.  Old timers who came to America still referred to it as the Kaiser school.

In 1909 I had to go to Russian school in the Mitteldorf. Although our German folk had been in Russia for over a hundred years, we didn't fraternize with the Russians, dealing with them only in business matters... When I went to the Russian school in Mitteldorf, my teacher’s name was Hill.  He was referred to as "Gigl Schnitter" (probably Gickel Schnitter or chicken catcher). I attended for about a year, then just stayed home and helped do the farming and hauling merchandise to help support the family... Some of our prosperous folk sent their sons to boarding school in Saratov, where they got a good education plus a chance to learn the Russian language. They, of course, landed the better jobs, both in civilian life and in the military services. Most of us farm lads were content to get through school as quickly as possible. 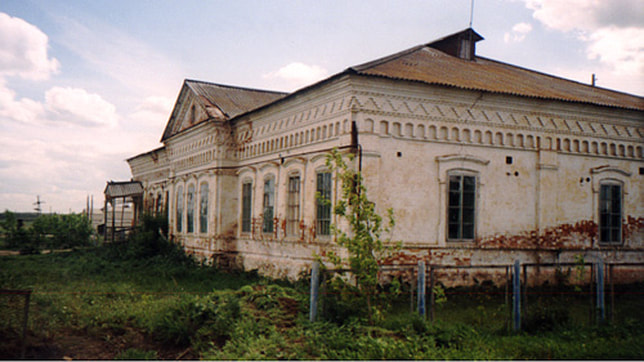 This is probably the so called "Russian School" built in 1905. This 1999 photograph of the school is provided courtesy of Dr. Ruth Schultz. 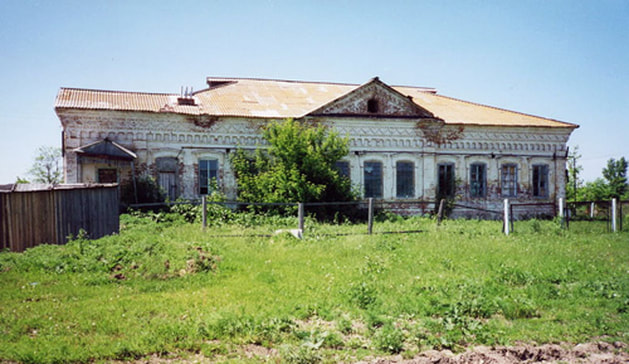 Photograph of Norka's "Russian School" taken in 2001. The school was still in use at this time. In late 2005 or early 2006 the school was torn down due to safety concerns. Courtesy of Steve Schreiber. 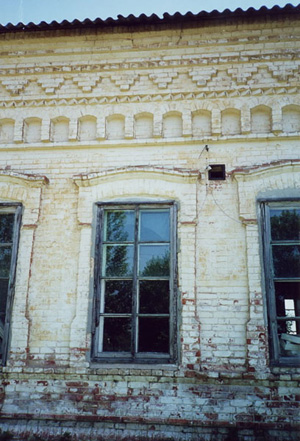 Windows in the Russian school in 2001 courtesy of Steve Schreiber. At this time the school building was still in use. 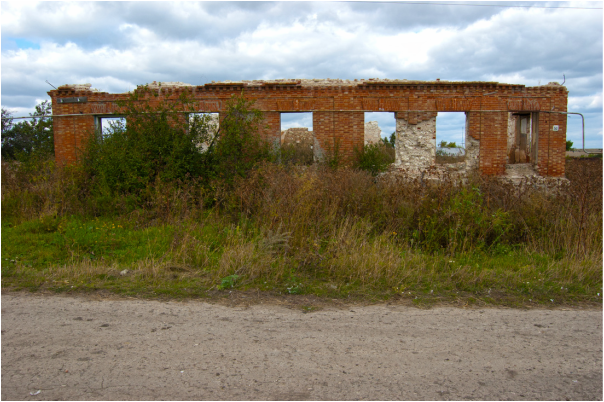 The remnants of the Oberdorf (Upper Village) school built in 1915 on the 7th row. Photograph courtesy of Steve Schreiber, 2006.
The Schulmeister (school master or principal) was regarded as a person of great importance in the colony because of his position and the fact that he acted as the assistant pastor. In the classroom religion and education were closely interrelated because the primary textbooks were the Biblische Geschichte (Bible Stories), the Catechism, the Bible and the Wolga Gesangbuch (Volga Song Book).

Ludwig Battin, a Catholic teacher who migrated from Paris, France, was among the first settlers in Norka in 1767. Due to his Catholic beliefs, he was not allowed to teach the Reformed and Lutheran children. The first Schulmeister in Norka was Peter Pauly (Pauli). Schulmeister-Küster Johannes Kaiser served until 1814. From 1814 to 1815, Johannes Romeis served as Schulmeister. Johann Heinrich Schnell (1794-1855) served as a schoolmaster in the colonies of Norka, Stephan, Köhler and Neu-Norka from about 1820 to his death in Neu-Norka in 1855. From 1870 to 1890 Johannes Rudolph served as Schulmeister at the Unterdorf school. Carl Leonhardt served from 1902 to 1919 and he was replaced by Alexander Leonhardt who quit in 1929. 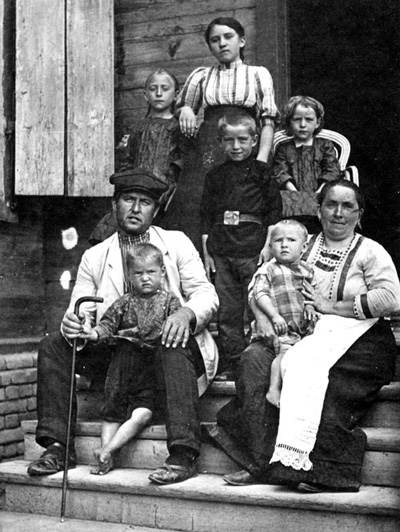 Norka Schulmeister (Schoolmaster) Carl Leonhardt and family about 1912. Members of the Leonhardt family were deported to Siberia in 1941. Source: Used with permission of AHSGR (Lincoln).
The Schulmeister was also responsible for the teachers who served at the village schools. According to Emma Schwabenland Haynes, it was customary to choose teachers whose chief qualification consisted of a willingness to serve for a small amount of money. In some cases the school teachers had difficulty in reading and writing, and as they usually had hundreds of children under their care, it is easy to assume that they were not able to teach them a great deal. Many of the pastors tried to get laws passed which would better the educational conditions of their parish, but as a whole, school rooms remained crowded.

An excerpt from the Autobiography of Jacob Miller written in 1936 provides further insights on the subject of education:

"I, Jacob Miller, as the second to the oldest son of my parents, Johannes Peter and Elisabeth Miller, was born on the 2nd day of July, 1871, in the colony of Norka, Saratov, Russia, a colony of about 11,000 people at that time.

My father was a well-to-do farmer and was able to give his children an education. There were three large school houses in this colony in which was taught mostly religion and reading, writing and arithmetic.

The teachers were all German teachers. Only about 75 children, all boys, had a separate schoolroom and were taught history and geography, in the Russian language, and grammar in both German and Russian.  I and my four brothers were privileged to attend this school. The rest of the children did not know anything about the outside world, only what someone had told them.

There were no newspapers of any kind, except the pastor of the church, which was a Reformed church, got a few copies of a church paper from Germany.

I was confirmed at the age of 14, and at that time my father had leased a farm away from the colony.  In connection with the farm was a small water power flour mill which only ground about 75 bushels of grain in 24 hours.  Besides this we kept cattle and sheep, and hogs. Since the land was very productive we were doing very well.

When I was 16 years of age I was permitted to go to high school in a neighboring colony, Grimm (Lesnoi Karamysch). I soon got to the last class, and on my father's uncle's advice I had to quit without finishing high school.  But my youngest brother, Peter, was privileged to go through the university." 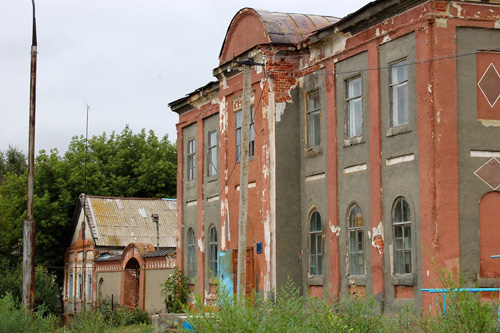 School in the colony of Grimm (Steve Schreiber 2006). This school was one the education centers of higher learning in the Volga colonies. A photo of the school in 1911 is shown below. This photo is from the "Volksfreund Kalender für das Jahr 1911, Saratow". 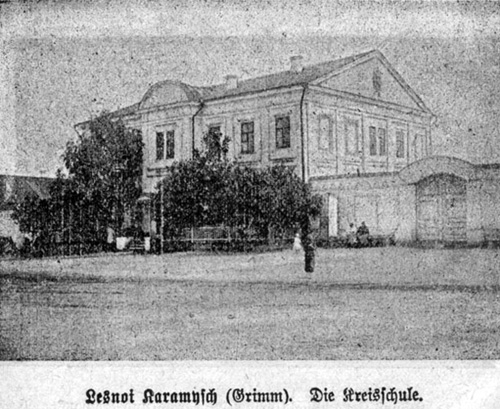 School in the colony of Grimm. Source unidentified.
James Long writes that in the late 1800's clerical authority in the colonies had begun to diminish. This coincided with a rising secular elite who received their education at the central schools in Lesnoi Karamysh (Grimm) and Katharinenstadt (now Marx) which had been established in the 1830's. Long states that these two schools produced almost all of the teachers, village clerks, and colony leaders throughout the Volga German settlement area.

Advanced educational opportunities at the technical and vocational school in the city of Engels was afforded to some of the youth. 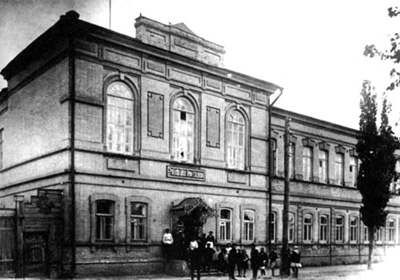 Technical and Vocational School in Engels. Source unidentified.
George Philip Lehl, who was born in Norka in 1900, recalls that people would compress the manure cleaned from their barns into blocks which were dried in the sun (Mistholz). The blocks helped pay for their children's education as each family contributed 75 blocks to heat the school during cold weather.
The education system continued to improve under the Soviet regime and by the 1930's it was common to have professional teachers in the schools. By the mid-1930's the church school system had been completely replaced by government controlled schools.
The Soviet education system was short lived as the deportation in 1941 ended any type of formal learning for most of the Volga Germans for many years to come.

Pleve, I. R., and Richard R. Rye. The German Colonies on the Volga: The Second Half of the Eighteenth Century. Lincoln, Neb.: American Historical Society of Germans from Russia, 2001. 219-42. Print.