The following article is from the Russian encyclopedia titled, Historic and Geographic Dictionary of the Saratov District, compiled by A. N. Minkh, a member of the Saratov Scientific Archive Commission, and published in Saratov in 1898. Minkh was a member of a noble family of German descent. The translation of this article and the related notes are provided courtesy of Dr. Lyudmila I. Koretnikov.
Norka, also known as: Norki, Staraya (Old) Norka. A German colony and Volost (small rural district) center of Norka Volost, Kamyshin uyezd (district), 2 districts of Zemstvo Head is located in the north of Kamyshin uyezd, 4 verstas from the boundary with Saratov uezd. It is located 51 degrees 10' North in latitude and 15 degrees East in longitude from ﻿Pulkovo﻿ on both banks of the Norka river, which shares its name with the settlement. The river starts 2-3 verstas to the west from the colony. There are 8 convenient descents to the river and 4 wells. The altitude 1 1/2 – 2 verstas to the north from the settlement is 810 English feet over the level of the Black sea. It is one of the oldest colonies in the Volga region: according to Klaus (Our Colonies, 1869) the first settlers came here from different regions of Germany asked by Catherine the Great in 1764-1766. Before 1864, the colony was a vast Norka county that comprised such colonies of Atkarsk uyezd as Grechinaya Luka, Krestovy Buerak, Peskovatka and what is called now Norka, Oleshnya and Linevo-Ozero volosts. 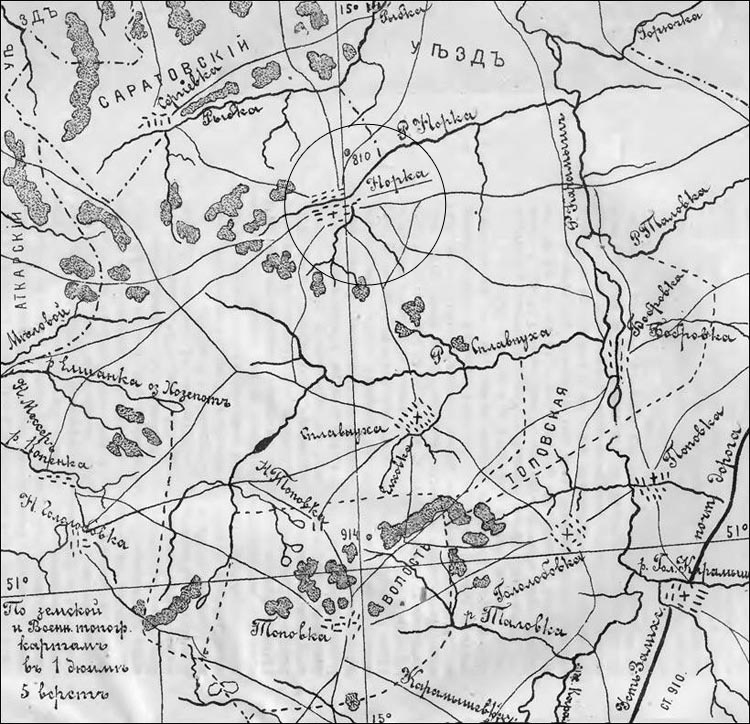 Map from the Russian encyclopedia titled, "Historic and Geographic Dictionary of the Saratov District," compiled by A. N. Minkh, a member of the Saratov Scientific Archive Commission, and published in Saratov in 1898. Norka (Russian = Hopka) is circled.
According to Norka Volost Board, Norka was founded in 1764 and almost at once a German Church school was opened.

Norka volost borders in the north upon Saratov uyezd, in the east – upon Sosnovka volost, in the south-east – upon Tonovka Volost, in the south-west – upon Oleshnya Volost, and in the west – upon Atkarsky uyezd. Norka volost is situated in the north of Kamyshin uyezd. There are rivers flowing on its territory: at its east boundary – the Karamysh river that takes the Splavnukha river and the Norka and the Rybka rivers (these two rivers are flowing at the boundary with Saratov uyezd) in here. In the very western part of the volost only small streams start, flowing to the Medveditsa. The Volost is settled by Germans, who came from different parts of Germany in 1764-66 and there are only two colonies in it: Old Norka and Splavnukha (Huck). According to the Volost Board, in 1894 there were 8,979 males and 8,848 females, total: 17,827 people in the volost.

We came across the name Norka in other places in Saratov Province, e.g. in Petrovsky uyezd - the Norka river flowing into the Uza from the left (left tributary of the Sura river); the village Mordovskaya Norka on the Uza river and the village Russian Norka (a.k.a. Arkhangel’skoye) on the Norka river.

Sazhen - Russian measure of length equal to 2.13 meters or about 7 feet.

Zemstvo - Czar Alexander II implemented the zemstov system (elective district council) of local government that was represented at the lowest level by the mir (village government and cooperative) and volosts (similar to English county).