The tranquility in the German colonies was shattered in the summer of 1774 by one of the greatest peasant revolts in Russian history. The Don Cossack, Emelian Pugachev, led the insurrection, posing as an escaped and still reigning true Tsar of Russia, Peter III, who intended to punish his wife Catherine II. Pugachev promised freedom from serfdom and taxation and called for the extermination of civil officials and landlords. Within months the rebellion attracted thousands of serfs, factory workers, and miners, Old Believers, Tatars, Bashkirs, and others who descended in a massive campaign southeast from Petrovsk toward Saratov in the first week of August 1774.

On August 5, the German colony of Jagodnaja Poljana was attacked, three men were captured and later whipped to death. The following day Saratov was taken and the rebels ransacked the city, opening prisons, government storehouses and executing captured aristocrats and officials whose bodies Pugachev ordered left unburied. Pugachev's band also destroyed the Office for the Guardianship of Foreign Settlers which was established in 1766. As a result, all records of the colonies at that time were lost. After three days in Saratov, Pugachev led his forces down the west side of the Volga River ravaging the newly formed German colonies that were in his path. 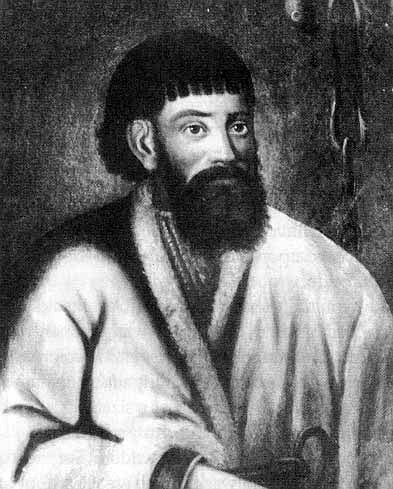 18th-century portrait of Emelian Pugachev. Source: Wikimedia Commons.
Pugachev's route did not follow the Astrakhan track, as is commonly accepted. Pugachev avoided routes where he might be ambushed, and he maintained some distance from the Volga, where boats might catch him. Instead, he went through the German colonies and villages along this approximate route: Rybushka (a Russian village north of Norka), Norka, Splavnukha (Huck), Popovka (Kutter), Gololobovka (Dönhof), Karamyshevka (Bauer), Makarovka (Merkel), Pochinnaya (Kratzke), Ust-Gryznukha (Göbel), Kamenka, Verkhnaya Kulalinka (Holstein), Verkhnaya Dobrinka (Dreispitz), Nizhnaya Dobrinka (Dobrinka) and Kamyshin. The latter part of Pugachev's route is unquestioned because he tried to go through those settlements where there were sufficient people, horses and food. The testimony of eyewitnesses who encountered Pugachev in Norka, Dönhof and Kratzke also confirm this route. 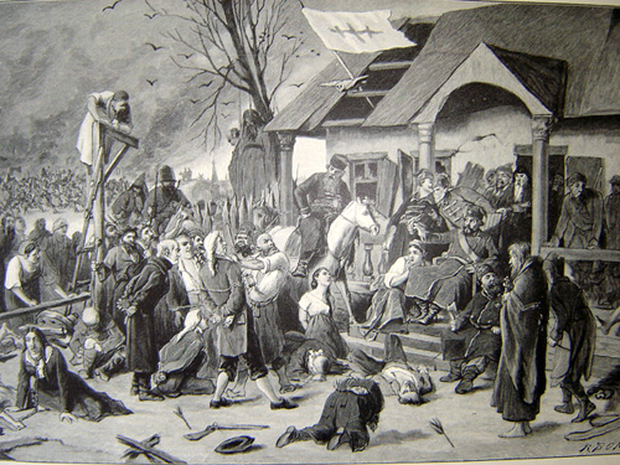 Emelian Pugachev and his followers terrorize a village. Source: Unknown.
A young man, hiding with others in the attic of the Kratzke schoolhouse, later related how Pugachev arrived in front of the school in a heavily escorted carriage and promptly had gallows erected from two long poles and a crossbeam. Four bound prisoners on horseback were led in and beaten, then hung in pairs on two ropes thrown over the crossbeam.

The grim scene was repeated many times as surviving colonists recalled the times when at night the horizon was bright with the lurid flames of destruction in the villages.

Many settlers fled to hide in the countryside, burying what few valuables they possessed while others remained in the villages.

One such individual, Johann Wilhelm Stärkel, the great-grandfather of Reverend Wilhelm Stärkel, was seized by Pugachev's men when they entered the colony of Norka. Along with others, Stärkel was forced to drive the rebels' stolen wagons to a point near Kamyshin. Miraculously Stärkel later escaped and returned to Norka. Jacob Dietz writes the following story about this incident:

Pugachev entered Norka in 1774 and demanded that people with carts transfer his booty to the closest town. By lot, Stärkel was among those carters, and he was to carry the treasury. Instead of the nearest town, he was forced to go even farther to a village not far from Kamyshin, where he was commanded to bury the treasure in a hidden place. Stärkel and his companions were to have done this under the observation of Pugachev atamans because the carters were wisely promised rewards. That evening they were actually given a handsome amount of money, but they were not allowed to return home. A drunken orgy began, during which some Russian woman went to Stärkel and whispered to him: "You, Saxon, try to get out here, because they want to hang you tonight." Seized by terror, Stärkel snuck away from the company unnoticed and hid under a barrel in a cellar. The rebels soon noticed his absence and several people began to search for the fugitive to kill him. They approached the cellar, stuck their long pikes into it, but the barrel saved him. His pursuers departed, convinced of his absence. Stärkel spent all night in the cellar, not emerging until midday. The first thing he saw filled him with horror; the corpse of his companion hung from the gates.

The same fate had also awaited him in order to keep secret the location of the buried treasure. Convinced that Pugachev's people had left the village, Stärkel escaped from the very place which had almost become his grave. Beyond the village, he caught one of the horses wandering there, and he galloped to his own village. But the next day he again encountered one of the remaining Pugachev detachments, where he was again detained. How this happened remains unclear. Stärkel was not able to leave the camp because the detachment was attacked by government forces and there began a disorderly route leaving many dead and wounded behind. Among the latter was Stärkel, who a Don Cossack had deeply wounded in the shoulder, which prevented him from escaping. Stärkel fell to the ground and played dead. 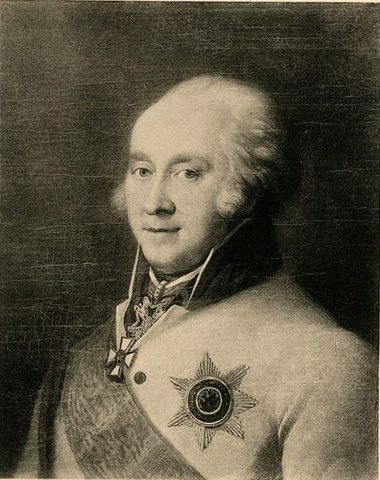 While Michelsohnen and his troops pursued the fugitives, officers with a small detachment remained behind to bury the dead and care for the wounded. The Cossacks simply finished off the wounded. A Cossack approached Stärkel and raised his pike to deliver the final blow, but the wounded man jumped up and tore the pike from the hands of the amazed Cossack. The officer who witnessed this scene rode up to see what was wrong. Stärkel noted the Cossack's intent and prayed for mercy because he had only be chance and against his will fallen into Pugachev's band. He promised to show where the treasure was. The officer agreed to grant him life and to do all possible to alleviate the situation. Whether or not the treasure was found and delivered to Michelsohnen, we have no information. It is reliably known only that Stärkel and the remaining Pugachev prisoners were taken to Tsaritsyn and locked in prison. His only privilege, compared with the other prisoners, was a larger ration of food. Other prisoners literally starved. All clothing was taken from the prisoners in Tsaritsyn, and they were given prison garb. Stärkel was thus deprived of the significant sum of money sewn into his clothing.

In the Tsaritsyn jail, prisoners starved, and they were kept in terrible conditions for the course of several months, after which they were sent to Saratov on a large barge. Because this route went against the current, the prisoners themselves had to tow the barge. When this difficult and slow journey reached the shores not far from the German colonies, among those towing this clumsy barge were Stärkel and two of his co-colonists, all the time contemplating escape. When the barge touched shore, all three found a pretext to disembark. The barge was barely out of eyesight when they made for the nearby forest, which they successfully reached. Without stopping, the fugitives continued their way, and by mid-day they reached a Russian village where they were welcomed into the peasant hut. Exhausted and starving, they devoured their food and emptied the kettle of hot kasha. They left in fear of further pursuit. But both Stärkel's companions were not destined to reach their native village. they had gone only a short way when both fell down dead. Evidently the hastily consumed hot kasha was deadly to them because of their starvation; their stomachs having become unaccustomed to food. Because of his favorable treatment by the the officer, Stärkel fared better. He survived the food and soon reached the colony of Galka (Ust-Kulalinka), where he had relatives who helped him reach Lesnoi Karamysh (Grimm). From there, his brother-in-law took Stärkel to Norka, where on one fine day the fugitive returned to his own house after a five-month absence.

A related Pugachev story was told by Johannes Stärkel, the brother of the well-known Norka pastor, Wilhelm Stärkel, who wrote the following report which was printed in the Friedensbote for November 1901:

​My great-grandfather, Johann Wilhelm Stärkel was living in the colony of Norka with his young wife and little son when Pugachev entered his village in 1774. The outlaw demanded that the colonists furnish him with a certain number of wagons and drivers with which to transport his baggage. Fate decreed that my great-grandfather was one of the men chosen, and the treasure chest of the rebels was placed on his wagon. My great-grandfather had hoped to return home after the robbers reached the next village, but instead he was compelled to continue to an isolated spot north of Kamyshin where he and a German comrade were ordered to bury the chest.

That night at an inn to which the robbers went, a Russian woman approached my great-grandfather and whispered to him secretly, “You German, see that you get out of here. Otherwise you will be hanged.” With fear and trembling my great-grandfather hid himself in a dark basement behind a barrel. His absence was soon noticed and a search party came into the basement but was unable to find him. At noon of the next day, after everything had become quiet, he crept out of his hiding place. To his horror he saw the dead body of his comrade hanging from a door post. He himself left as quickly as possible, although in his haste he forgot to take with him a pair of shoes with silver buckles which remained in the basement.

Pugachev was finally defeated by Russian government forces south of Sarepta and was later captured following his betrayal by fellow rebels. He was taken to Moscow, where after a trial, he was executed.

Haynes, Emma Schwabenland. "Pioneer Stories from the Volga." Work Paper No. 9 of the American Historical Society of Germans from Russia (1972): 17-32. Print.