The celebration of Pfingsten (Pentecost) is observed seven weeks after Easter Sunday. Among Christians, Pentecost commemorates the descent of the Holy Spirit upon the Twelve apostles and other followers of Jesus as described in the Acts of the Apostles 2:1–31. For this reason, Pentecost is sometimes described by some Christians today as the "Birthday of the Church."

According to Pastor Eduard Seib:

Pentecost must be considered to be the most important festival for Volga Germans. One hears singing the previous evening and even throughout the whole night. The choir and other groups also visit their friends, the pastor, the schoolmaster and also those who are ill and cheer up each person by singing one or two songs below his or her window. At Pentecost the members of the congregation who live outside of the village and pupils from the city go to their relatives in order to visit. The entire village is filled with cheerful people who show their pleasure in life by singing and laughing. 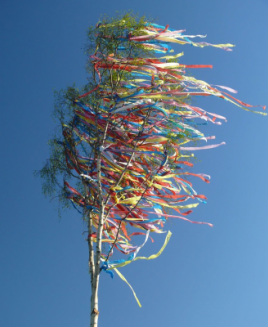 Traditional birch maypole (Maibaum). Source: Naturparke Deutschland
On the Saturday before Pentecost, the house was thoroughly washed and cleaned. White sand was spread in the yards, pathways, and streets.

Houses and the church were often decorated with birch branches, flowers and green wreaths.

The primary symbol of Pentecost was the Maibaum (maypole), typically a tall birch trunk decorated with green branches, wreaths, ribbons, and scarves. Maypoles were placed in the ground near the church and homes of highly respected people (pastor, schoolmaster, teachers, business owners) who often gave 50 to 100 kopeks to those who set up the pole.

Late at night or early in the morning, unmarried young men would often set up a maypole for their girlfriends. This was considered a great honor for the girl. Sometimes the same girl would receive two or three maypoles which caused her to wonder who loved her the most. In the early years each young girl received a maypole and the whole village was covered in green.

There was a dark side of Pentecost for some unfortunate young girls who had argued with their boyfriend, refused a proposal of marriage, or been accused of poor conduct. In Norka, the home of a "bad girl" was decorated with straw instead of a birch tree. The parents hurried to clean up the straw before sunrise so no shame would come to the family. There were cases where the girls took their tormentors to court and successfully proved their innocence.

A bogeyman would often appear in Norka during Pentecost. He was known as Der Butzemann, a spiritually activated scarecrow with a long history in Germany.

The holiday of Pentecost was celebrated for two days because it came at the time of the hay harvest when much work had to be done. The maypoles were left standing for several days and served as a gather place for the youth.

On the night before Trinity Sunday (the first Sunday after Pentecost), none of the youth would sleep, in spite of the long day and short night. Groups of youth strolled the streets, sang songs, and danced.