A Historical Timeline of the Colony of Norka and its People

1708 - In December, Peter the Great orders that Russia be divided into eight Governorate (provinces). The land where the colony of Norka would be established in 1767 was part of the Kazan Governorate.
1717 - The Governorate of Astrakhan is established through the subdivision of the Governorate of Kazan. The future settlement of Norka is within the boundaries of Astrakhan.
1729 - Sophia Augusta Fredericka, a princess of Anhalt-Zerbst is born in Stettin, Pomerania, Prussia. She will later rule the vast Russian Empire under the title Catherine II, but she is better known as Catherine the Great.
1735 - Russia declares war on Turkey. One goal was to gain access to the Black Sea.
1750s - Most people in German speaking Europe are landless subjects of their rulers. They are heavily taxed, have few civil rights, men are frequently conscripted to fight wars, and life is a constant struggle for survival.
1756 - The Seven Years' War begins and some 900,000 to 1,400,000 people will die in this conflict.
1762 - Catherine II (the Great) becomes Empress of Russia at the age of 33. 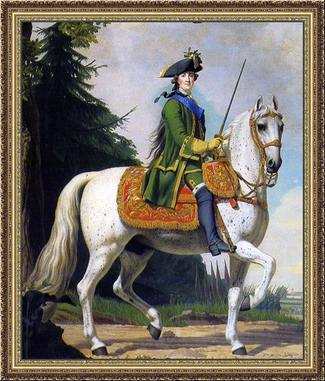 Equestrian portrait of Catherine the Great in the Preobrazhensky Regiment's uniform by Vigilius Eriksen (1762). Source: Wikimedia Commons, Public Domain.
1762 - Catherine the Great issues her first Manifesto inviting foreigners to settle in Russia. Due to a lack of specifics about what was being offered, this Manifesto did not achieve the desired response in attracting colonists.
1763 - The Seven Years' War ends leaving much of German speaking Europe in ruin and poverty.
​1763 - Catherine the Great issues her second Manifesto encouraging Western Europeans to settle in Russia. ​The second Manifesto attracts thousands of colonists from German speaking Europe, largely because of benefits and promised incentives that were not included in the first Manifesto.