In the fall of 1928, Norka native, Heinrich Wacker returned to his birthplace.

On January 22, 1908, Heinrich married Amalia Nagel who was born in Norka on October 6, 1885. Henry and Molly immigrated to the United States in May 1909, sponsored by Henry's uncle, Henry Pauli, of Portland, Oregon.

Heinrich's wife Molly and first-born son, John (born Nov. 1908), along with other relatives arrived in Portland in 1910.

In 1912, Heinrich (known as Henry Walker) filed for U.S. Citizenship in Portland, Oregon and became a Naturalized citizen on November 20, 1916 in Portland.

Records show that Henry traveled frequently across the border to Alberta, Canada where he may have owned property. Henry had an aunt and uncle (Anna Catherina Wacker and Adam Giebelhaus) living in the Stony Plain area. Tricia Evans, a niece of Henry's, recalls that the two families were close and maintained communication throughout their lives. 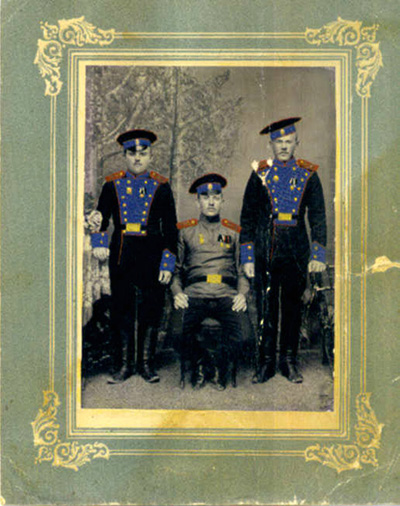 Henry Walker as a member of the Russian military is shown on the left of this photo provided courtesy of Tricia Evans. Tricia states "This photograph has the most terrific enamel painting on top of the black and white photography. The paint is original to the picture. I believe the picture is circa 1905 and was probably taken in Norka. On the back of photo, printed in Russian, are the words: Photography - G. Meyer."
Henry watched future events in Russia with an anxious eye, and many of his relatives, including his brother John, remained in Russia. In 1921-22, there was a famine in Russia which was particularly severe along the lower Volga River.

Anxious to know what had happened to his family and friends, Henry decided he would find a way to return to Norka and document conditions there with his 16mm movie camera. According to Arthur Flegel, Henry's travel expenses were paid in part by people who wanted to see their relatives in Norka.

A passport and ship manifest document that Henry traveled to Berlin, Germany in 1927 with the hope of obtaining permission to travel to Norka. Unfortunately, Henry was unable to obtain a visa. He returned to New York on May 22, 1927 aboard the S.S. New York which had sailed from Hamburg, Germany.

In 1928, a persistent Henry traveled to Germany a second time. With the help of someone at the German embassy, he was able to obtain a visa and reach Norka. It is also possible that Henry received support from Pastor Johannes Schleuning who was a leader in Berlin's Volga German community at the time. Pastor Schleuning arrived in the United States in October 1921 to solicit support for the famine victims. During his time in the USA, he had an extended stay in Portland with his brother Alexander John Schleuning. It is probable that Henry met Pastor Schleuning during this time.

With a visa in hand, Henry was on his way to Russia. It was during this trip that a film was made of conditions in Norka and the surrounding area. The film is a rare portrayal of life in the German colonies.

During this visit, Henry was in Norka approximately two weeks. He filmed the village at considerable risk because of Soviet regulations against filming in the villages without permission. It is believed that Henry's contact at the German embassy also assisted in smuggling the film out of Russia through diplomatic protection.

Henry returned to New York on October 22, 1928 aboard the S.S. Dresden sailing from Bremen. The harvest scenes shown in the film confirm that Heinrich was in Norka in the September/October time frame.

At the beginning of the film, there are pictures of the Atlantic crossing, as well as some scenes while in Berlin. Most of the filming in Russia takes place in Norka, although there is a small section of film which shows pavement, a truck and taxicab in Saratov, as well as scenes of a Volga excursion boat. (Note: This section should have come at the end of the film, but was spliced incorrectly while being prepared for the Portland convention.)
Henry wanted to portray both positive and negative aspects of the conditions in Norka. He shows the only two brick houses in Norka, the white house belonging to the Albrecht family. There is also a harvesting scene in which the brother of Jacob Aschenbrenner of Portland, Oregon is shown.

Another scene shows the relatives of Walter C. Krieger from Portland, Oregon (the husband of Marie Trupp Krieger). In this scene, we see four ladies wearing white, with a girl in a darker dress (a maid) in the center. They are all standing on stairs leading to a porch.  Seated in the foreground are an aunt and uncle of Walter Krieger (Henry and Dorothea Krieger) and seated behind them are Walter’s parents, Mr. and Mrs. Nicolaus Krieger. (Dorothea is the brother of Jacob Klaus).

According to Walter C. Krieger, before departing from Norka, Henry donated all of his clothing with the exception of what he was wearing.

After Henry returned to Oregon, he often showed the film and gave talks about the conditions in Norka. He collected money for the poor people in Norka, but had difficulty forwarding the funds to Russia.

Henry moved to California in 1930 where he raised and fattened livestock (hogs) on a small ranch in Montebello (webmaster note: Montebello is near Asuza). The farm was located on the site of the current Lakewood Shopping Center (2008). Here he lived until a stroke took his life on January 22, 1953.

Henry was known as the "Godfather" of our family.  It was Henry who always stepped up to help a family member who was struggling.  He was responsible for his brother Jack Walker, Jack's son Jackie Walker, his brother-in-law Bernie Nash, and my father Walter Henry Bauer having the ability to purchase trash disposal businesses in the southern California area during the 1940's through the 1960's.  Uncle Henry also owned a trolley and taxi business in Portland before moving to California.  He got my grandfather started with a trolley also.

The film continued to remain in the Jacob Aschenbrenner home and was passed on to his son, George Aschenbrenner. In 1973, the AHSGR convention was scheduled to be held in Portland, Oregon. Prior to the convention, Walter C. Krieger and Jack Deines took the original film to a laboratory for inspection. At this time, they found that the film could be copied for $125, if they both helped to edit the film. Editing turned out to be difficult, because of the poor condition of the film. Several sections of the film were torn and therefore removed. The result is that some segments were misplaced in chronological order. Despite the complications, two copies of the original 16mm film were made. One copy of the film was shown at the convention to everyone's delight. At the time, many of the people in the film were known.

​After the convention in 1973, one copy of the film was taken to AHSGR headquarters in Lincoln, Nebraska. The second copy was held by Marie and Walter C. Krieger in Portland, Oregon.

Several Portlander's (including Walter C. Krieger) recorded an audio tape in 1985 with their recollections as they watched the film.
The copy of the film held by the Krieger's was given to Steve Schreiber before Marie's death in 2006. This copy was stored in the temperature and humidity controlled archive room at the Center for Volga Germans Studies at Concordia University until its closure in 2020. This copy of the film is now preserved at the Family History Library in Salt Lake City.
The copy held in Lincoln was restored by the National Film Preservation Foundation. AHSGR released a DVD documentary based on this film in July 2016 and it is available for purchase through their online bookstore.

Heinrich’s grandson, Mr. Conrad Walker of San Diego, California, recalls 1927 as the year of the first trip, and 1928 as the date of the second trip. This information is confirmed by the passenger ship lists.

Rachel Krieger Holmes, recalls information about the Henry Wacker film in her story Successful Research: "Like Finding a Needle in a Haystack".