German Pioneers Across the World 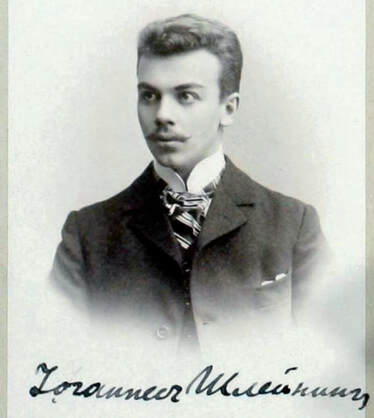 Portrait of Johannes Schleuning as a student in Dorpat. Source: "Mein Leben hat ein Ziel".
Centuries of continuous and numerous emigrations of Germans have created German settlements in the Old and the New World which under most circumstances contributed significantly to the economic and cultural well-being of their adoptive countries. About the century-old German presence in Northern America one can read in the Yearbook of German-American studies and the German-Canadian Yearbook (Deutsch-Kanadisches Jahrbuch). Love of their mother-tongue and their inherited culture, respect for tradition created by a long chain of generations and the desire to combine what was inherited with novel experiences for themselves and their community in a new type of environment, strengthened the belief of many immigrants that the synthesis of old and new was best achieved by fostering their heritage. Such preservation while avoiding assimilation is and has been possible only for the price of continuous personal and organization engagement. Now and then religious communities, cultural and social organizations as well as media in the mother-tongue are the places where the minorities find self-assurance. These institutions however depend very frequently on the restless activity of a handful of idealists. 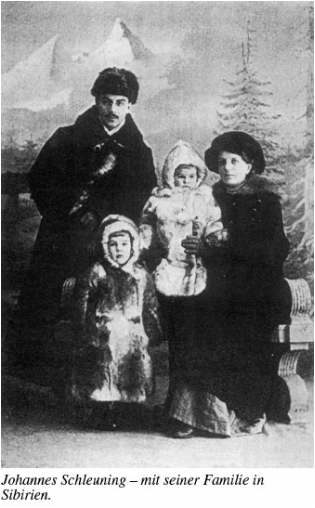 Photograph of the Johannes Schleuning family in Siberia from the original source article.
One of these idealists with a life-long commitment to his community was the Russian-German Minister Johannes Schleuning, who was born the 27th of January 1879 in Neu-Norka at the lower Volga. His place of birth belonged to an area where Germans have left a strong mark. They came to the region because of a call by empress Katharine II, who granted the settlers a series of privileges which attracted since 1763 numerous German farmers and craftsmen – 29,000 individuals in the first five years who founded more than 300 German villages to which daughter colonies were added later. Nowhere was life easy for the German emigrants, however the tough peasant people of the Volga-Germans had to endure a particularly difficult fate: more than a century lasted the raids of the steppe nomads, it took several decades until rich harvests could be reaped from the soil of the steppe and already in 1870 the privileges once granted forever by the empress were renounced. During World War I, which according to the Russian prime minister Goremykin was not only fought against the German Reich but against the German per se, they had to suffer from discrimination and persecution; subsequently there were the fights of the civil war, the Bolshevist revolution, expropriations, mercilessly forced deliveries of goods and in the years of 1921/22 a terrible famine that lead to the loss of a quarter of the population by death by starvation or by refuge. This was followed by the forceful collectivisation of  the farmland and the Stalinist terror and finally in fall of 1941 the deportation of the total population, about 400,000 Volga Germans into forced labour camps in Siberia and Kazakhstan, Solzhenitsyn's infamous Gulag Archipelago.

Confronted with such a destiny the Volga-German leadership faced extremely difficult responsibilities. Many believed first in the turmoil of the civil war that the situation would finally improve, others who dreaded a victory of Bolshevism succeeded in timely escape to Germany. To the latter group belonged Schleuning, who after the study of theology in Dorpat  (now Tartu, Estonia) had been appointed pastor in Tbilisi (Georgia) where he served as a minister to the German community and as an editor of the monthly Kaukasische Post (Caucasian Mail). His criticism of the discrimination of the Russian-Germans earned him banishment to Siberia. Only after the February revolution 1917 he could return to the Volga, where he contributed for a few month as an editor of the Saratower Deutsche Zeitung (Saratov German News), the first German newspaper after the prohibition of the German language in World War I. The newspaper was prohibited however again – this time by the Bolsheviks - in December. 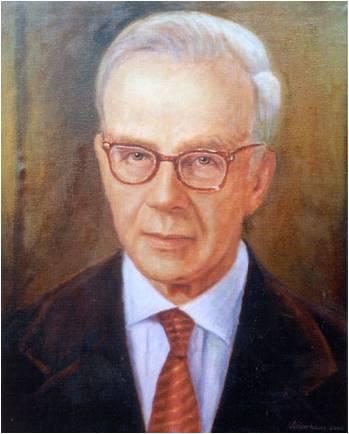 Johannes Schleuning, Volga German Pastor, Activist and Journalist. Source: "Historischer Forschungsverein der Deutschen as Russland e.V., Kalendar 2002."
As a pastor and a leading advocate of civil rights extremely at risk he succeeded in emigration to Germany in the spring of 1918 where he immediately engaged in widespread activities to support his compatriots. In the framework of the Zentralkommitee der Deutschen in Russland (Central committee of the Germans in Russia), within which he served as chairman from its foundation in 1921 to 1929 he rose awareness for the difficult situation of the Russian-Germans in Germany and abroad. In April 1919 he founded in Berlin the Verein der Wolgadeutschen (Association of Volga-Germans) and became its chairman. This association first took efforts to integrate the escaped Volga-Germans and raised funds in Germany and the United states to fight the famine at the Volga; with this in mind Schleuning travelled 1921 to the United States. The collaboration of the Volga-Germans in the U.S. in the famine relief led 1922 to the foundation of the American Volga Relief Society. Also in the Executive Board of the Kolonistenbank (Bank of the Colonists) Schleuning was active and likewise in a leading position of the VDA. From its foundation in 1923 to 1935 he was chief editor of the monthly Deutsches Leben in Russland (German Life in Russia), the official magazine of the Germans from Russia. This publication was banned in 1935 by the Gestapo. Professionally Schleuning served as a minister to a community in a Berlin suburb from 1925 to 1933 and than became pastor and Superintendent in Berlin-Lichtenberg. After his retirement he again concentrated all his efforts on behalf of the Russian Germans. He took charge of the care of Russian-German refugees and re-migrants and contributed to  the build up of the Arbeitsgemeinschaft der Deutschen aus Russland (Germans from Russia Working Group) which was later called Landsmannschaft der Russlanddeutschen (Germans from Russia Heritage Society). From 1952 to 1955 he served as its chairman and spokesman, from 1955 to 1957 he still was its spokesman. He died the 7th of September 1961.

Schleuning was a prolific writer. Besides many articles in various periodicals he was the author of the following books: Die Deutschen Kolonien im Wolgagebiet (The German Colonies in the Volga Region), Berlin 1919; Aus tiefster Not: Schicksale der Deutschen Kolonisten in Russland (From a Sea of Trouble: Fate of German Colonists in Russia) Berlin 1922; Das Deutschtum in Sowjetrussland (German Life in Soviet Russia) Berlin 1927; In Kampf und Todesnot (Struggle and Distress) Berlin 1930; Die Wolga-Deutschen: Ihr Werden und ihr Todesweg (The Volga-Germans: Their Beginnings and their End) Berlin 1932; Die Tragödie des Deutschen Bauerntums in Sowjet-Russland (The Tragedy of the German Farming Community in Soviet-Russia) Leipzig 1933; Die Stummen reden: 400 Jahre evangelisch-lutherische Kirche in Russland (The Mute Speak: 400 Years of Lutheran Church in Russia), Erlangen 1952. His memoirs Lebenserinnerungen eines russlanddeutschen Pfarrers (Remembrances of a Russian-German Minister) were published under the title Mein Leben hat ein Ziel (My Life Has a Purpose) in 1964 in Witten.

Koch, Fred C. The Volga Germans: In Russia and the Americas, from 1763 to the Present. University Park: Pennsylvania State UP, 1977. Print.