History > Loss of the Volga Homeland

Loss of the Volga Homeland, Assimilation and Emigration

Thus, in a period of roughly three decades, probably over one million ethnic Germans were murdered through deportation, enforced starvation, or mass executions in the Russian and Soviet empires.”

Despite the mass mortality resulting from famine the deportations, conditions in exile and the labor army, a large percentage of the deportees physically survived these travails. This alone did not ensure the cultural survival of the group. The dispersal entailed in the deportations permanently destroyed the traditional communities of the Volga Germans and their ability to maintain their culture and ethnic identity. Even today the ethnic Germans of the former Soviet Union have been unable to return to the areas from which Stalin deported them. 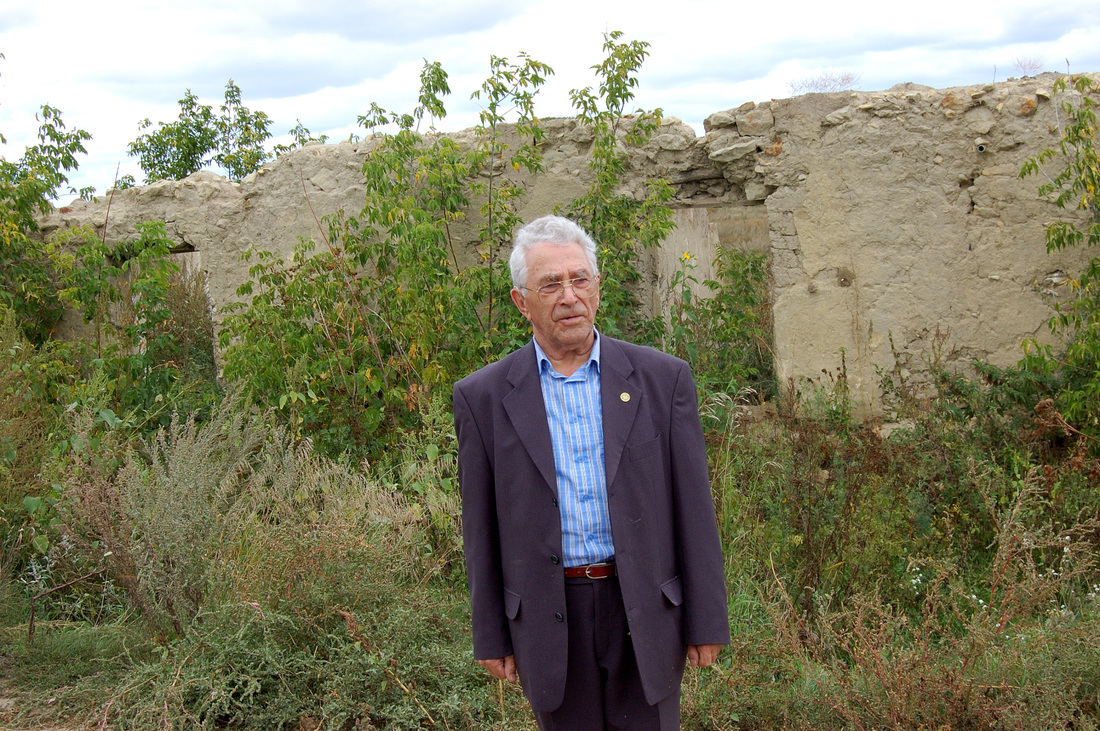 Konrad Urbach, born in Norka, visits the ruined house of his grandparents in September 2006. Konrad was deported to Siberia in 1941 and now lives in Germany. This was the first time Konrad returned to Norka. Photograph courtesy of Steve Schreiber.
With the death of Stalin in 1953, the deportation policy was reviewed and by 1956 renounced. In February 1956, Soviet leader Nikita Khrushchev condemned the deportations as a violation of Leninist principles.

However, the Meskhetians, Crimean Tatars and Volga Germans were not allowed to resettle their former homelands as, it was claimed that all of them had “taken root” in their new areas of residence. Even after the rehabilitation decrees for the Germans in 1964, this remained the official party line.

Perhaps the most significant impact to the Volga Germans was the loss of their German churches, schools, newspapers, and language. In essence the traditions and culture of this ethnic group was largely destroyed by the deportation.

In May 1979, the Soviet government was considering the establishment of an autonomous German region in northern Kazakhstan. The proposal met with significant local resistance from the Kazakh people. Ethnic Germans comprised only 6 percent of the population at the time. On June 16, protests against the proposal were held in the city of Tselinograd (now Astana, the capital of Kazakhstan). Shortly thereafter, the Russian authorities stopped any further consideration of the proposal for several decades.

In the late 1980s the Wiedergeburt (or Rebirth) movement by leaders of the German minority in Russia attempted to gain the right to return to their former homes. This movement ultimately failed due to strong anti-German sentiment and protests by the Russians and Ukrainians who had occupied the villages and farms of the Volga Germans. In a back handed compliment, the Volga Germans were told that they were indispensable in the Kazakhstan and Central Asia. The Soviet Germans found themselves in an uncomfortable predicament: they were now permanently confined to the Asian part of the USSR with no political future and a restricted cultural life. Their decision was to remain in Russia under difficult conditions or emigrate.

In fact, many Germans decided to stay in Russia or Kazakhstan. They worked hard and many have achieved some level of upward mobility through promotion to managerial positions. However, the bulk of ethnic Germans remained in subordinate jobs under Russian or Kazakh bosses. In 1997, with many thousands of Germans migrating to Germany, the Russian government returned to the 1979 idea of forming an autonomous region for the Germans. In large measure, the government wanted to stem the flow of valuable workers from this area to Germany. This time they named it the Autonomous Republic of the Steppes in an effort to appease the non-German majority. Despite the government's efforts to avoid a German name, the colloquial name given to the region was the very Germanic Steppenland. Germans made up approximately 25 percent of the population at the time. One of the biggest international supporters of Steppenland was Germany, which began to invest in the development of the autonomous republic, primarily to slow the flow of immigrants and encourage Volga Germans to remain in Russia and Kazakhstan. The attempts to keep ethnic Germans in the region were largely unsuccessful with over 200,000 people leaving Kazakhstan in 1992 alone.

Most ethnic Germans remaining in Kazakhstan are not fluent in Kazakh (or German for that matter as those remaining in Kazakhstan are for the most part Russian-speakers), they along with most other minorities continue to express fear at what they consider the discriminatory impact of the government’s language policies in favor of Kazakh, and their subsequent near exclusion from a number of areas of public employment, since applicants to middle or high rank positions in the administration must demonstrate a good command of Kazakh. Ethnic German have very little representation in the government.

Through the loss of language, cultural institutions, and intermarriage with other ethnic groups, most Volga Germans remaining in Russian and Kazakhstan have largely assimilated into the dominant society. Some purposely keep their German ancestry hidden. 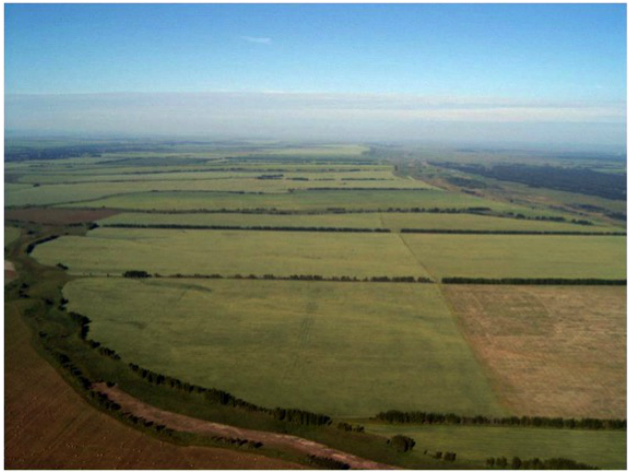 The deported Germans have helped to transform the Kulunda Steppe into a productive agricultural region. Source: http://www.kulunda.eu/
For many, the best option was to leave Russia. Following the example established by the Russian Jews in the 1970s, the Russian Germans sought the right to emigrate and they also found similar obstacles. With growing West German support and pressure (including financial incentives offered to Moscow) mass emigration to Germany began in 1987, with approximately two million Greman-Russians from the former Soviet Union immigrating to Germany from 1987 to the present. Their relocation is understandable in the light of their twentieth-century experience under Russian authorities and the promise of a better life in the land of their ancestors.

Ironically, many descendants of the colonists that settled in Norka in 1767 have returned to their ancestral homeland. Over time, they will assimilate into the German population as the descendants who migrated to North and South America have done before them. The German colony of Norka is now only a memory. 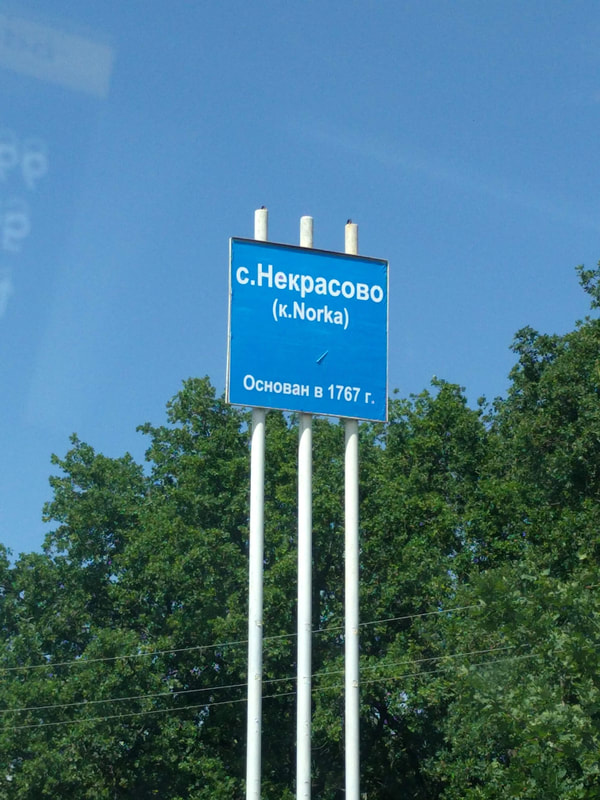 Entry to sign to the village of Nekrasovo (Kolonie Norka). Founded in the year 1767. Photo courtesy of Alexander Häuser (2018).