Ship Transport to Kronstadt, Russia in 1766

A long segment of the journey from the colonists homelands in Germany and other parts of Western Europe took them across the Baltic Sea and the Gulf of Finland by ship. Most of the colonists departed from the old Hanseatic port of Lübeck, but others boarded ships at Reval (now Tallinn, Estonia) and Danzig (now Gdańsk, Poland).

It was initially planned that all of the transport ships would be hired through Lübeck shipping companies. However, due to the strong response to Catherine's Manifesto, Russian ships and two large English frigates were also hired to carry colonists. In total, 22,711 colonists arrived in Russia in 1766, the final year of migration. The first ship arrived in Kronstadt from Danzig on May 4th and the last ship, the Slon (Elephant), arrived on September 30th. The two English frigates carried about 20 percent of the colonists that year.

It is important to note that the ships disembarked the colonists and their belongings on the island fortress at Kronstadt, not at Oranienbaum (now Lomonosov, Russia) which lies on the mainland. On Kronstadt, documents were checked and customs inspections were carried out. 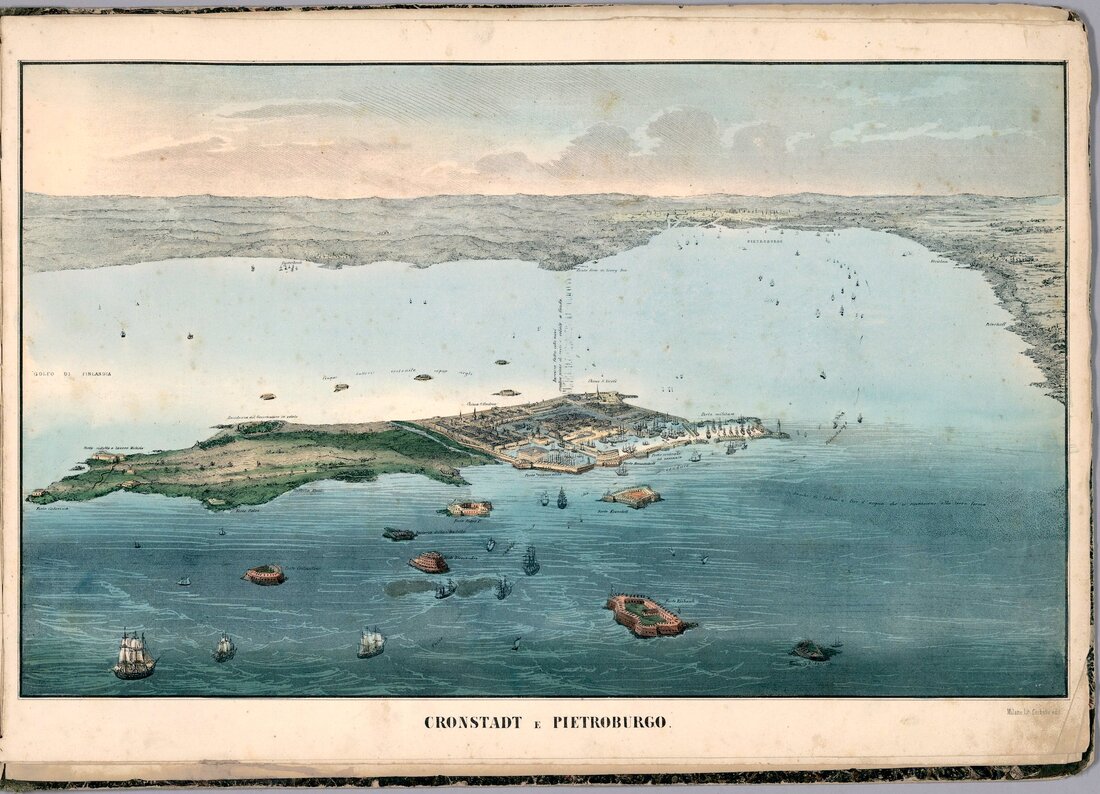 Panoramic view of Kronstadt in 1853 from the David Rumsey online map collection. Oranienbaum is located on the mainland just out of view on the right side of this illustration. St. Petersburg (Pietroburgo) is in the upper right corner of the illustration at the east end of the Gulf of Finland.
After the colonists disembarked they were ferried a short distance to Oranienbaum by six-oared boats, manned by Russian sailors. The colonists were recorded on lists made under the supervision of Ivan Kulberg, a Russian administrator for the Office for the Guardianship of Foreign Settlers.  Temporary quarters were provided at Oranienbaum as the colonists prepared for the next segment of their journey to the settlement area on the lower Volga.

Based on the book Chronicle of Wrecks and Fires of Ships of the Russian fleet 1713-1853, not a single Russian ship carrying colonists to Russia was wrecked during the sea journeys to Kronstadt in 1766. The two English ships likewise had no incidents during the transport of colonists.
​
The 26 ships carrying colonists that survived the journey to Norka are listed below:
Listed below is additional information about some of these ships and their commanders:

The Russian galliot Strel'Na arrived in Oranienbaum on August 9, 1766. The ship carried 203 people in total in addition to a crew of about 20 people. The Strelna was named after a city near St. Petersburg.

During the transport of the colonists in 1766 the Strelna was commanded by Midshipman Vasilyevich Sornev who was born on January 11, 1745. He was from a noble family in Smolensk Province and his father was a corporal of the Roslavl Dragoon Squadron. In 1761, the family had 140 serfs at their home is Roslavl. Sornev graduated from the Naval Gentry (nobility) Cadet Corps (NGCC) in St. Petersburg which had been first established in Moscow in 1701. The NGCC was the key educational establishment commissioning officers for the Imperial Russian Navy. At the time the NGCC was one of the best military educations institutions in Russia, training highly educated officers. Cadets and Midshipmen (cadets who achieved the highest classification) studied mathematics, navigation, artillery, fortification, rigging, languages (Russian, French, English, German), geography, history, politics, genealogy, rhetoric, heraldry, morals, drawing, fencing, dancing. Sornev achieved the rank of Midshipman on April 5, 1761. The rank of Midshipman in the Russian Navy is the equivalent of a Lieutenant in the Russian Army. This is perhaps why Sornev and other ship commanders are labeled as "Lieutenants". After his service transporting colonists, Sornev became a Lieutenant on March 3, 1769; a Lieutenant commander on January 1, 1773); and a Captain of the 2nd rank on January 1, 1779.

Seven years after it had delivered a large group of colonists in Kronstadt, the Strelna ran aground, was broken and sank on September 14, 1773 on Sommers Island, a rocky outcropping in the Eastern part of the Gulf of Finland. Nineteen crew members and one girl clung to the remains of the cabin and survived the ordeal.

The Russian pink Slon (Elephant) arrived at Kronstadt on August 9, 1766 under the command of Midshipman Sergey Panov carrying 397 colonists in total.

The Apollo arrived in Kronstadt on August 29, 1766 and carried 700 total colonists. The Apollo was commanded by Detlov Merberg.

The Russian galliot Citadel arrived at Kronstadt on September 13, 1766. The Citadel was commanded by Grigory Ivanovich Bukharin. Bukharin was born on January 27, 1743. He graduated from The Naval Gentry Cadet Corps (1760-1764). From 1761 to 1765, he participated in annual campaigns on the Baltic Sea. Bukharin sailed the Citadel from Kronstadt to Lübeck to transport colonists (1766), then on the same ship he made a trip between Kronstadt and the port city of Reval (now Tallinn, Estonia) in 1767. He later became Captain of the 1st rank in 1783 and was awarded the order of St. Vladimir of the 3rd degree in 1790. He died in 1796.

The Love & Unity was an English frigate that was hired to help handle the larger than expected number of colonists in 1766. It was commanded by Thomas Fairfax. The ship had a capacity to transport over 1,100 colonists. A second English frigate was also hired but its name is unknown at this time. The second frigate was under the command of Adam Beerfeier. Both English frigates made two passages during the summer of 1766 and carried about 20 percent of the colonists that year.

A model replica of the English frigate "Serapis" built in 1779. Source: www.modelships.de