An annual market fair or Jahrmarkt was held in Norka each October in conjunction with Harvest Festival and Kerbfest. Conrad Brill describes this event in his memoirs:

The new hospital (built in 1904) was on ground east of the old cemetery, and out the south edge of the village on the road that led to the Huckere Bridge, which we had to cross to travel to the village of Huck. This ground was referred to as Reides Bahn (Born) Felte where the villagers held an annual sale, similar to the flea markets of today.  It was referred to as Jahrmarkt (annual market). Nearly everyone brought things to sell, and people came from other villages to buy things we were selling. People like Mr. Faigler (Vögler), the leather tanner, set up booths loaded with tons of leather goods, and the Russian buyers from other villages usually bought out all of the red dyed leather quickly. Katza (cat skinner) Sinner brought caps made of hides of lambs, cats, or wild fur bearing animals. Besides buying cat hides and such, he skinned birds and feathered creatures, which was used for ladies finery. Katza Sinner was the noted village taxidermist. The sales lasted a week and you always bought more than you sold, unless you were the exception. The Jahrmarkt was held in the month of October. 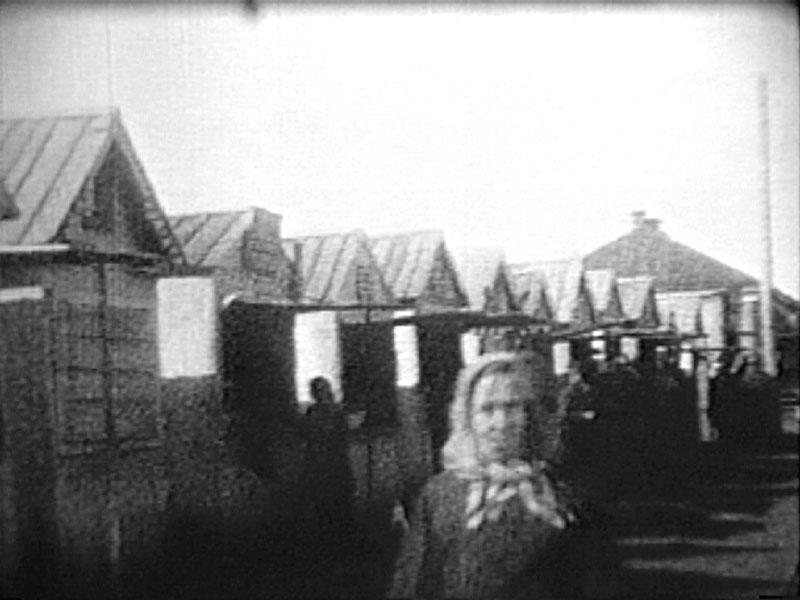 Image of the "Jahrmarkt" of 1928 from the film taken in Norka by Heinrich Wacker.
In a letter written by Pastor Friedrich Wacker in October 1922, he mentions the decline of the Jahrmarkt after the Bolshevik Revolution and subsequent famine:

On October 1st we, along with the Evangelical Christian community, celebrated the Harvest Festival. (We generally celebrate all Christian celebrations according to the new style calendar since its introduction.) In bygone days Norkans combined the Harvest Fest with their Kerb -- for each village it was a joyful folk festival.

The market stalls on the well-field were full of goods and a bustling market was going on in this otherwise quiet place. The houses of the village were neatly cleaned inside and out in preparation for Kerbfest, the housewives prepared special baked goods for these days and also other appetizing foods which they shared with guests who had come from afar. The youths also sought opportunities to have some fun but such opportunities were not always pious.

Since then everything has changed. The market stalls are no longer there. When the Revolution ended private trading, exchanges in the public market stalls was no longer possible. The boards from the stalls were hammered loose and taken away, some to be used for coffins. Finally it was directed that all should be torn down and the boards used to repair the schoolyard fences. The emergency caused other festive aspects of the Kerbfest to disappear also --yes, and they were not always clear about when to celebrate. Thus part of the populace has for years celebrated a quiet Kerbfest according to the old style date and the others according to the new style date. Against all that, this year's Harvest Fest was nevertheless still one that all could take pleasure in, even if the harvest of commodities, on average, was only a modest one.

By the early 1900's the Jahrmarkt was held up to three times per year.