The colonists brought the musical traditions of their German homeland to the Russian steppe.  The settlers would have been very familiar with worship services that included organ music.

Over the course of its history, several pastors of the Norka congregation had ties to the United Brethren, also known as the Moravian Church, which placed a high premium on Christian unity, personal piety, missions, and music.  These pastors had a strong influence on the role that music played in the worship services.  This influence continued to be evident in the North American settlements where groups of immigrants from Norka formed congregations.

Based on the information available, it appears that the Norka congregation enjoyed two organs during its history from 1767 to 1941.  The organs were housed in three churches during this time period.

Remarkably, the first of three churches in Norka was built in 1768 during the first year of settlement.  The early years were filled with many hardships for the colonists and there were insufficient funds available to purchase an organ for the church.  Before the acquisition of the first organ, it is likely that a larger harmonium (a reed organ pumped by foot) or a brass band provided the musical accompaniment. 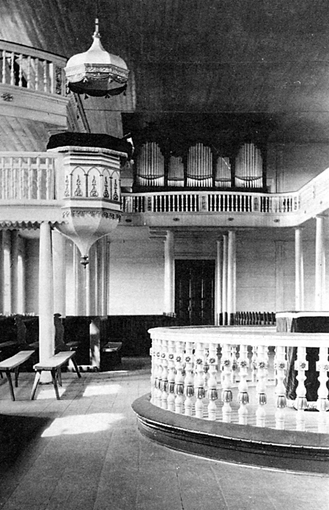 The interior of the Norka church in 1912 showing the organ above the entry door. Source: AHSGR Journal - Summer 1985.
After several decades, the colony was firmly established and became one of the most successful in the Volga German settlement.  In August of 1784, Rev. John Baptista Cattaneo became the pastor of Norka. Under Rev. Cattaneo's leadership, the congregation made a decision in 1791 to purchase an organ, probably from the chapel of the Castle Barby in Germany, at a cost of 304 Rubles.  The castle organ was used from 1747 to about 1809 by the Moravian Church. Later the Moravians moved to Gnadau, a village about 5 kilometers (or 3 miles) away from Barby.  At that time, Barby was part of Saxony (today the German state of Saxony-Anhalt) and was the home of the Moravian Theological Seminary. 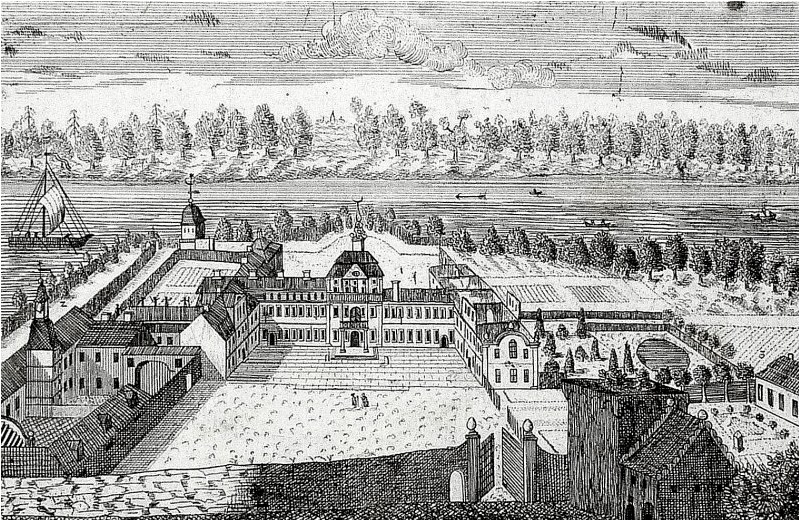 The Castle at Barby which was used as a seminary by the Moravian Brethren. The chapel part of the left wing of this complex.
It is likely that the organ was disassembled in Barby and then transported to Norka over water and land, in much the same way as the original colonists.  At the date of the organ's arrival in Norka, the population was about 1,500.

After 30 years of service in the first church, the organ purchased in Barby continued in use at the second Norka church that was built in 1822.  By this time the population of Norka was approximately 3,000.

The beginning of construction for the third church was marked on June 24, 1880.  The cornerstone was laid in place during a worship service led by Rev. Wilhelm Stärkel, who was the pastor of the growing Norka parish, which numbered about 7,000 at the time.  When the new church was completed in 1882, the aging organ purchased in 1791 likely continued serving the congregation for several more years.

In 1890, Rev. Stärkel represented the congregation in submitting an order to the E. F. Walcker & Cie. of Ludwigsburg, Germany to build an organ specially designed for the new church. Walcker Orgelbau was established in 1780 by Johann Eberhard Walcker who opened a small shop in Cannstatt.  In his first year of production, Walcker built an organ for the Lutheran Garrison Church in Ludwigsburg. The founder's son, Eberhard Friedrich Walcker, moved the company to Ludwigsburg in 1820. E. F. Walcker built his first Opus in 1821 for the Evangelical Lutheran Church in Kochersteinfeld and that organ is still in use today. 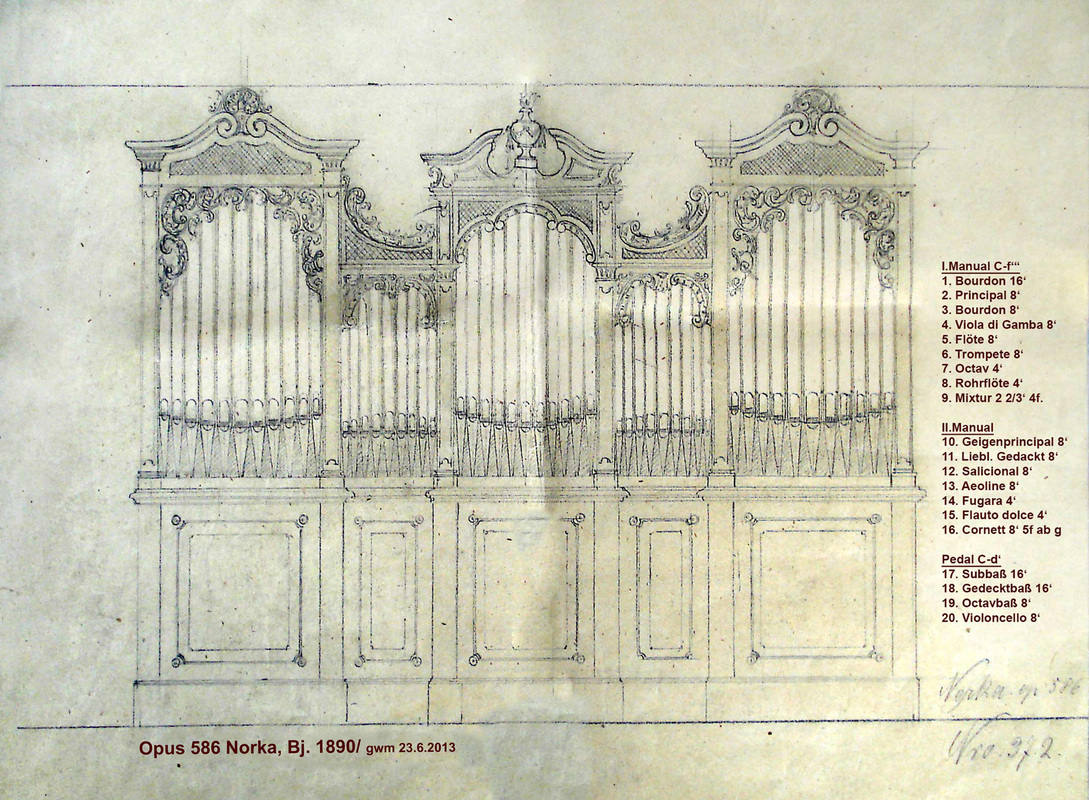 The original drawing of the organ built for Norka, Opus 586, courtesy of Gerhard Walcker-Mayer.
In 1840, the Walcker firm delivered its first organ to a foreign country, the Lutheran Church of Saint Peter in Saint Petersburg, Russia.  The organ weighed over 20 tons and was transported down the Rhine River and across the North and Baltic Seas to it's final destination, a journey lasting two months.  More commissions for additional organs in Russia soon followed.

The organ built for the Norka congregation was Opus 586 (the 586th organ built by the company).  The organ was constructed in Ludwigsburg and shipped to the lower Volga region of Russia.  The work order indicates delivery to the Talovka (Beideck) station which is near a rail line and the Volga River port of Schilling. 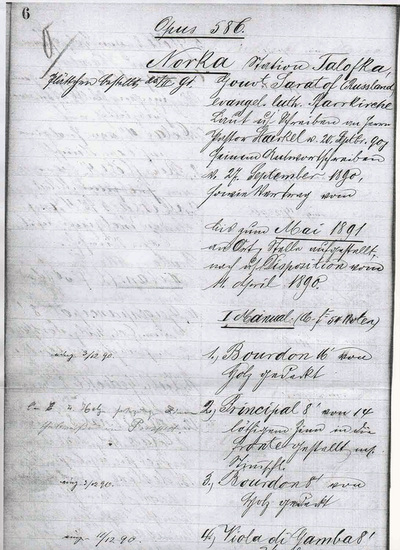 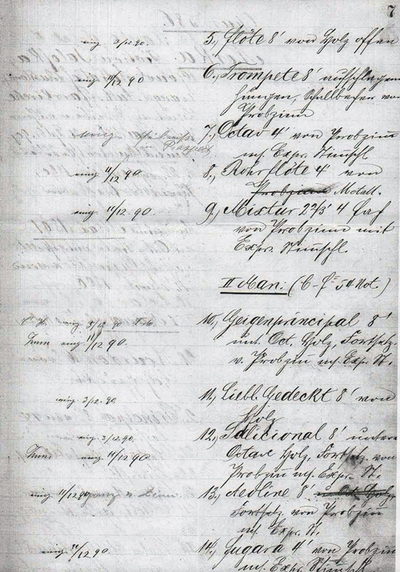 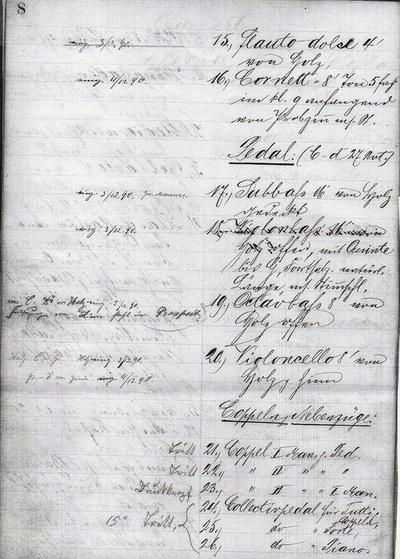 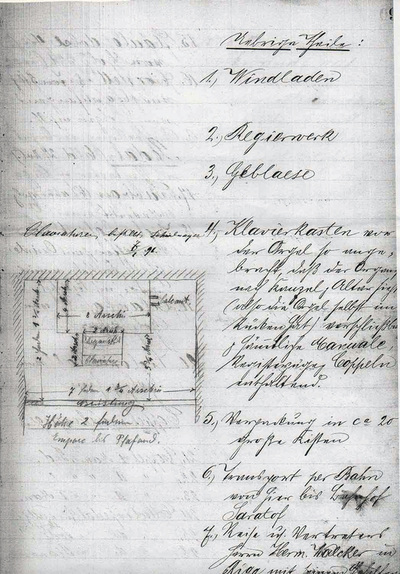 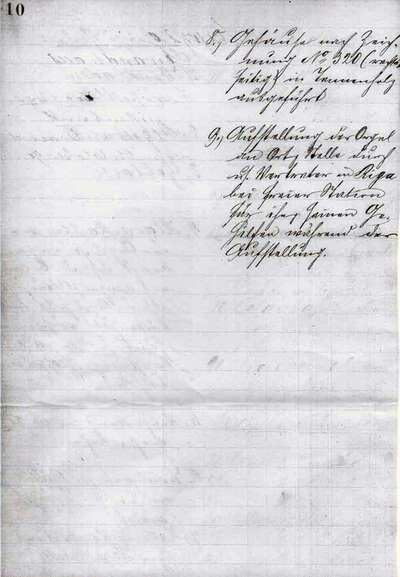 Handwritten pages detailing the order and specifications for the organ purchased by the Norka congregation from the E. F. Walcker firm. Courtesy of Gerhard Walcker-Mayer.
Upon arrival in Norka in 1891, craftsman from Walcker installed the organ on the second floor of the church over the entry door and opposite the altar.  The organ was supported by three sets of columns connected by horizontal supports which carried the weight of the instrument.  The old organ, which had served the people of Norka for exactly 100 years, was removed and presumably retired.

The 10,000 people living in the colony at that time must have been very anxious to hear the organist breathe life into the beautiful new instrument.

The organ was played by the schoolmaster and had the possibility of twenty registers or musical variations.  Although it was said to be only about one-quarter the size of a full pipe organ, it would still cause the church to vibrate when the volume reached its maximum.  The organ-pedaller who sat behind the organ pumped air into the different length of tubes leading to the large number of pipes.  The Walcker organ was said to be one of the finest in the Volga German colonies.

It is believed that the organ, which had brought so much joy to the people of Norka, was lost in the late 1930s when the Soviets destroyed the church.
According to Gerhard Walcker-Mayer, the current proprietor of Walcker Orgelbau, the organ in Norka is very similar to the Walcker organ in the Dalziel St. Andrews Parish Church in Motherwell, Scotland. The Motherwell organ (Opus 876) was built by Walcker in 1899 and delivered in 1900. The organ also has twenty registers. A recording of the Motherwell organ was made by Steve Schreiber in September 2019. By good fortune, Gerhard Walcker-Mayer was in Motherwell completing repairs to the organ when this recording was made.

Email dated September 9, 2013 from Leonore Kobitsch-Meyer to Steven Schreiber on behalf of the Protestant parish Barby.