Since Norka was a Crown colony (established directly by the Russian government rather than recruiters), it is likely that a number of wooden houses known as Krone Häuser (Crown Homes), had already been built by local carpenters when the colonists arrived in 1767. The number of houses may have been inadequate to shelter all the colonists in the first winter. Some family stories tell of their ancestors building huts that were partially underground, known as Zemlyanka, in order to live through the first winters until more housing could be built.

The original houses were known in Russian as Doma-pyatistenki, essentially a duplex with four exterior walls and one interior wall. The structures were designed to accommodate two households. 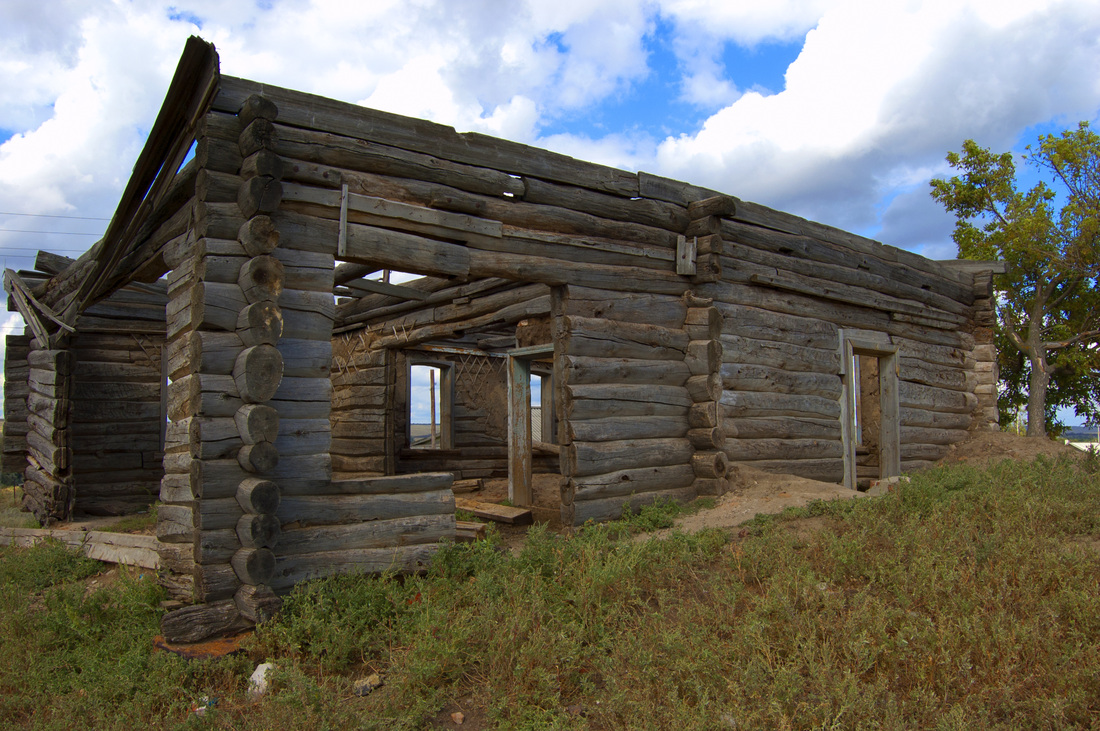 Remains of what appears to be one of the original houses built in the colony of Walter. Courtesy of Steve Schreiber (2006).
The houses were constructed of logs or lumber no thicker than 22 centimeters (8.7 inches). The structure was 6 by 10 meters (20 by 33 feet) with a chimney, floors, ceiling, five windows, four doors, two store rooms, and one oven. The height from floor to ceiling was at least 2.1 meters (6.9 feet). The doors and windows were equipped with latches. The roof had a small dormer and a ladder to access the roof was placed on the front porch. The house was roofed with bast and topped with shingles held in place with wooden pegs.

Each household had its own courtyard. Farm buildings were roofed with bast and covered with reeds or thatch.
Unlike the farmland that was shared communally, the homesite was the exclusive domain of the owner. The homesite was actually a courtyard either partially or entirely enclosed with a fence that was 1.8 to 2.4 meters (6 to 8 feet) tall. To save cost, sometimes part of the enclosure was made of sapling trunks wattled with willow shoots or similar growth.

Inside the courtyard was the family home, barns, sheds, a granary (ambar), a root cellar, sometimes an ice cellar, possibly a well, and a summer kitchen. All baking and cooking took place in this kitchen during the hot summer months when no fires were built in the main house in order to keep it cool for sleeping. The summer kitchen was sometimes used year-round for baking and it was always used for family washing. Occasionally the summer kitchen was also used as a summertime dining room and sleeping space.

The yard measured about 30 to 46 meters (100 to 150 feet) in width and ran about twice as long. The house was placed in a corner where it formed part of the enclosure. The courtyard was divided by a fence into the Federhof (dialect for Vorderhof or front yard) and the Hinnerhof (dialect for Hinterhof or back yard).  A solid gate, 2.5 to 3 meters (8 to 10 feet) wide provided access for wagons to the front yard and a smaller door allowed access for people only. A similar door and gate provided access to the back yard for wagons, farm equipment, and stock. The only access to the home was through the front courtyard as typically no doors opened directly on to the street. 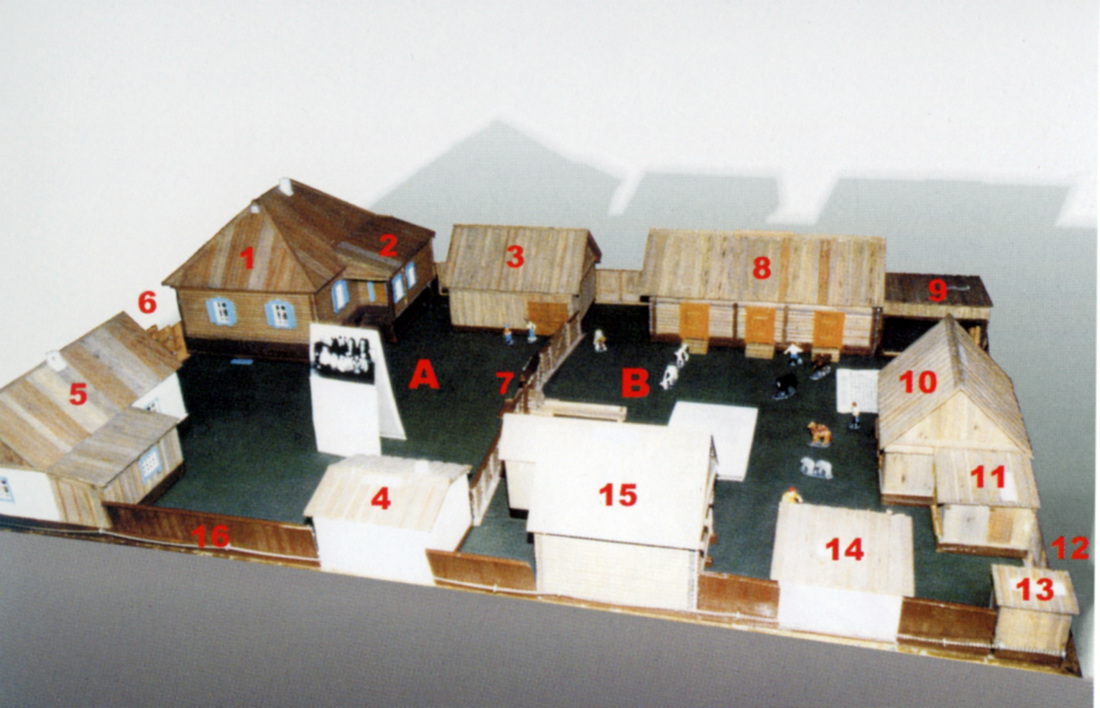 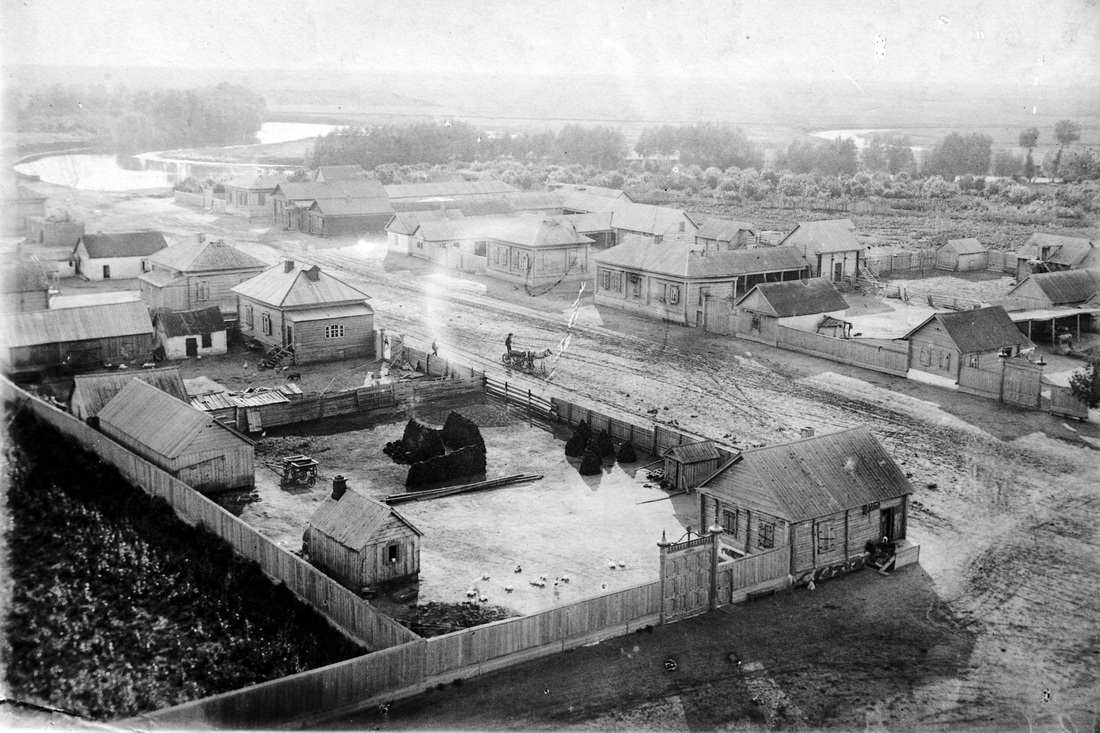 A 1920 photograph taken in the colony of Streckerau illustrates the typical Volga German homesite. Source: Wikipedia
Log homes predominated in the early years, but were gradually replaced by homes built of brick and dimension lumber. Hard packed dirt floors gave way to oak planking that was either painted or strewn with white sand. The sand absorbed mud tracked into the house from the yard and was swept out and replaced with a fresh supply when needed. 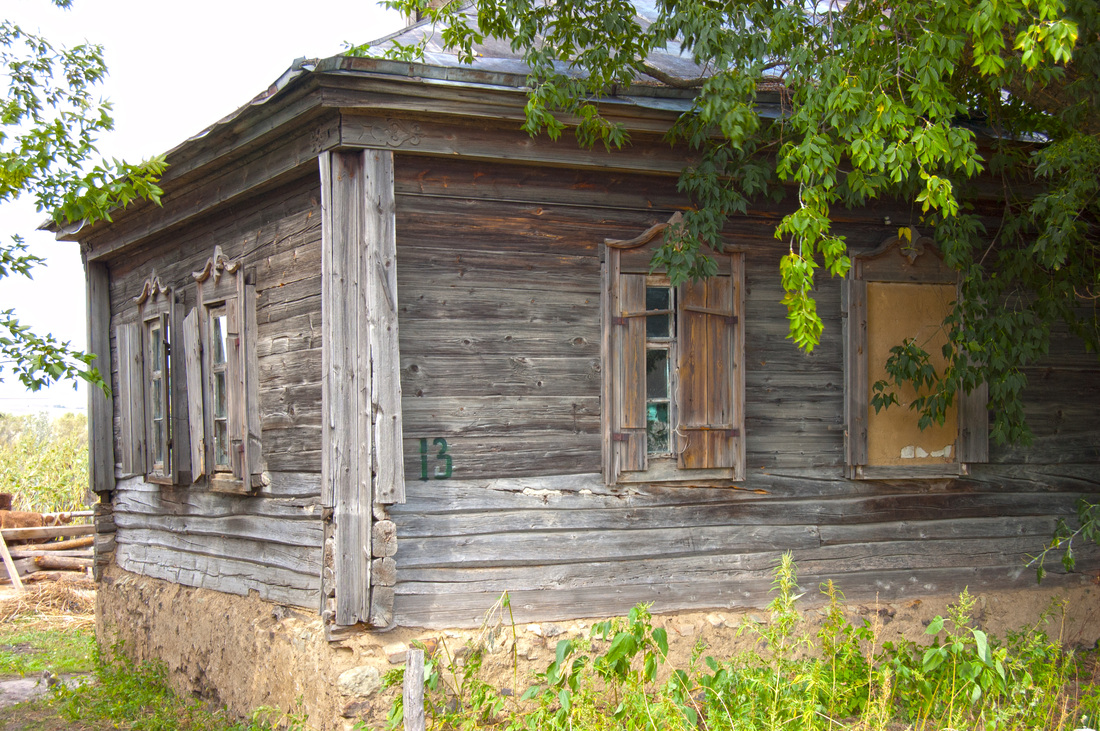 A wood home in Walter. Courtesy of Steve Schreiber (2006).
Most homes had thatched roofs made of select rye straw. These roofs were weathertight, durable and provided a high level of insulation from the weather. Thatched roofs persisted into the last days of the German colonies, but in later years, tin and board roofs often replaced the thatch. 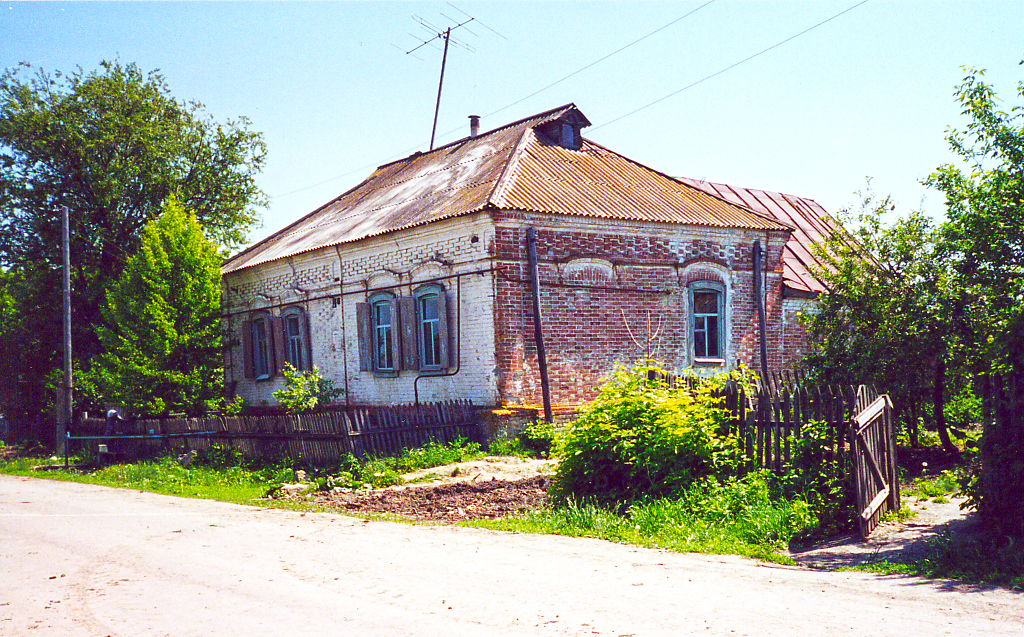 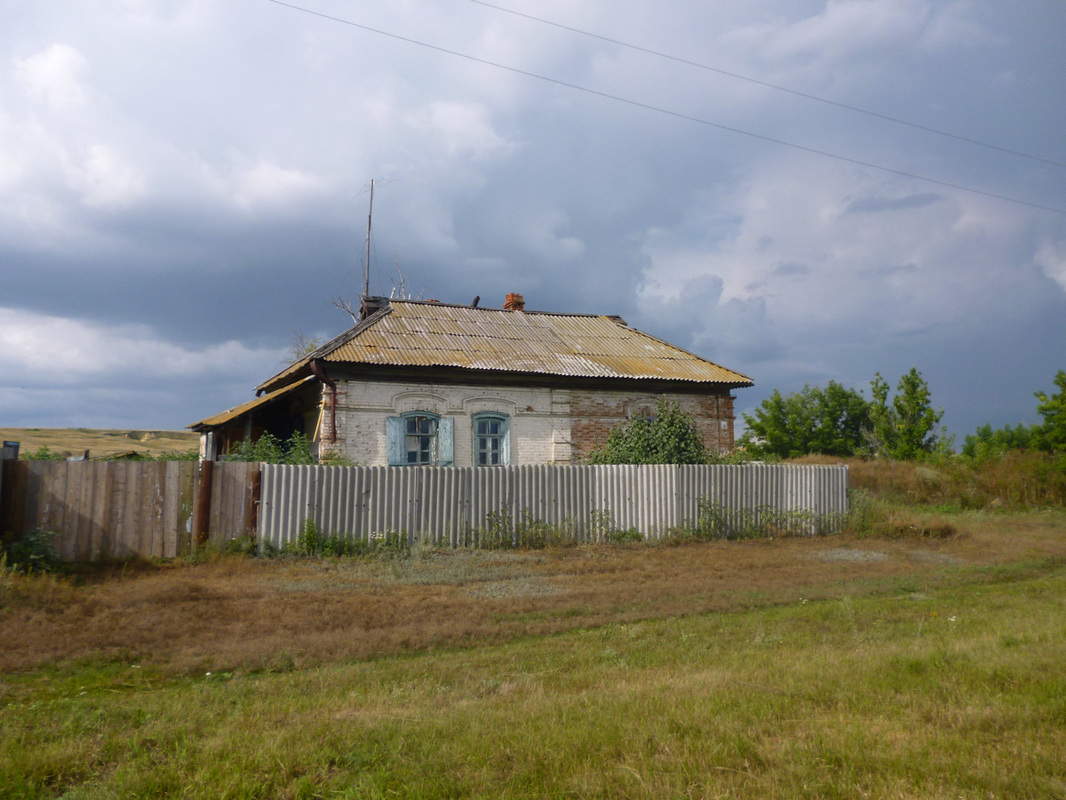 Typical brick house in Norka. Courtesy of Register der deutschen Siedlungen Russlands.
Homesites were arranged in orderly rows and each dwelling could have from two to six rooms that accommodated two or more married couples and their children. Independent observers noted that homes were generally neat and orderly inside. 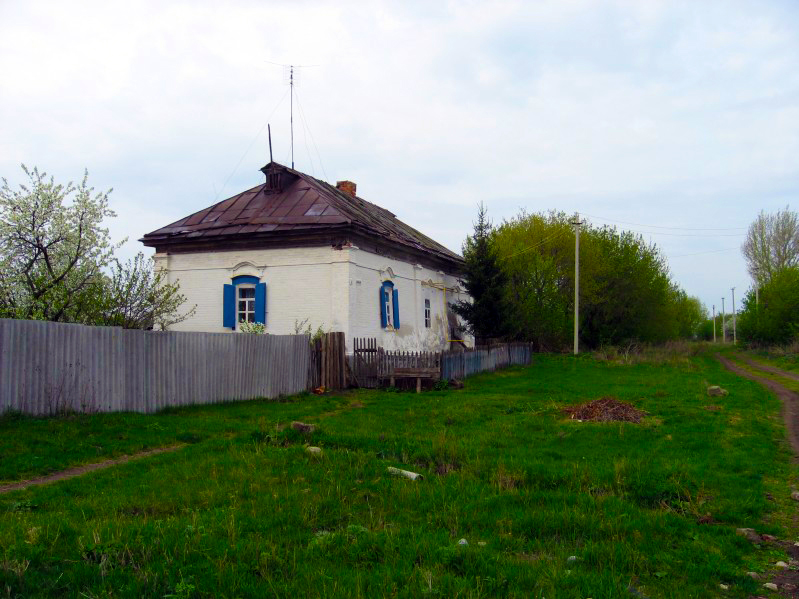 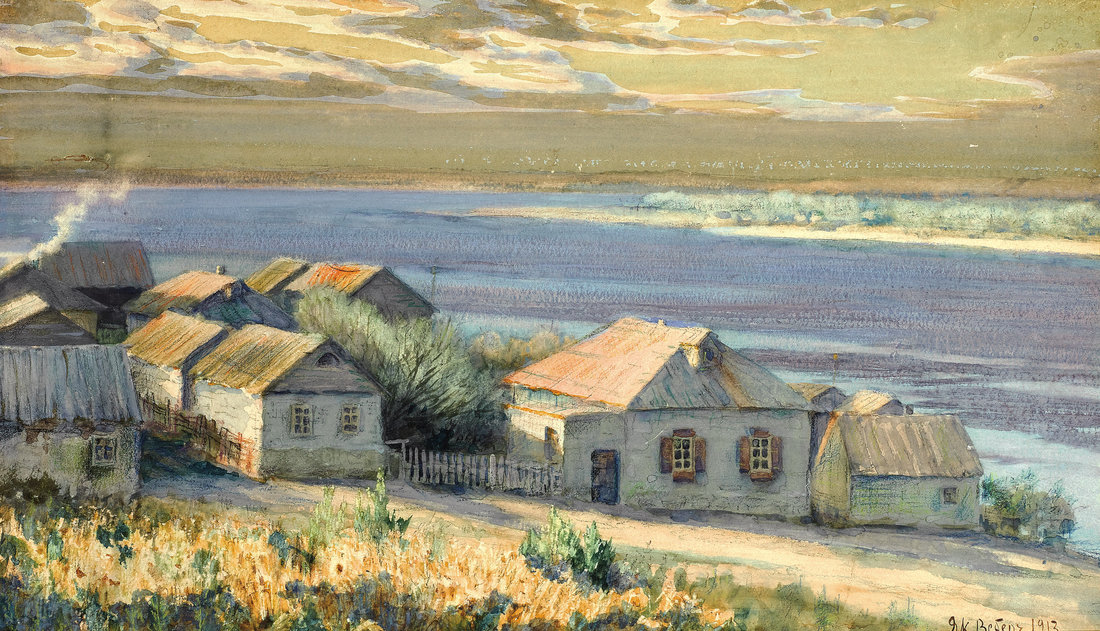 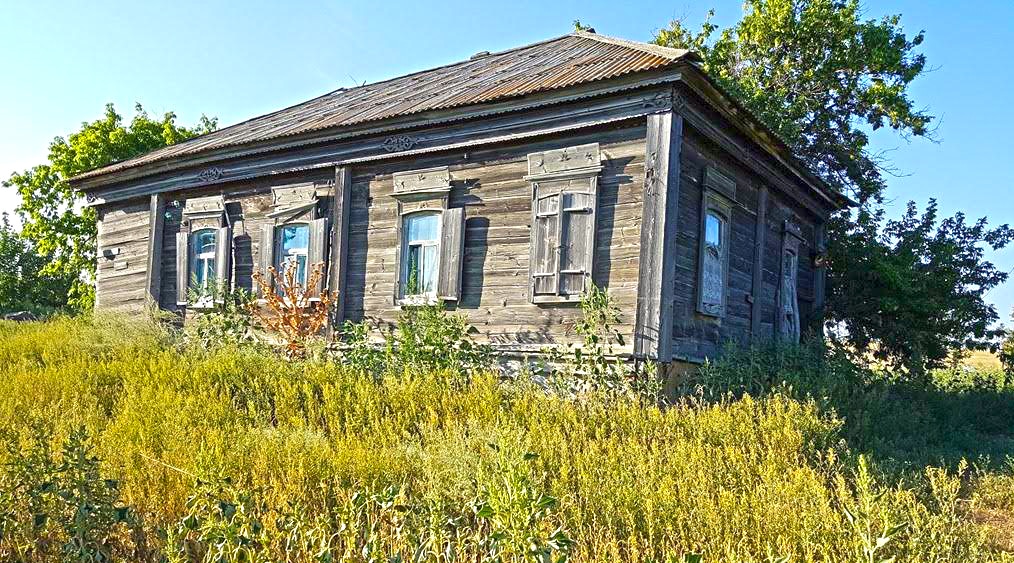 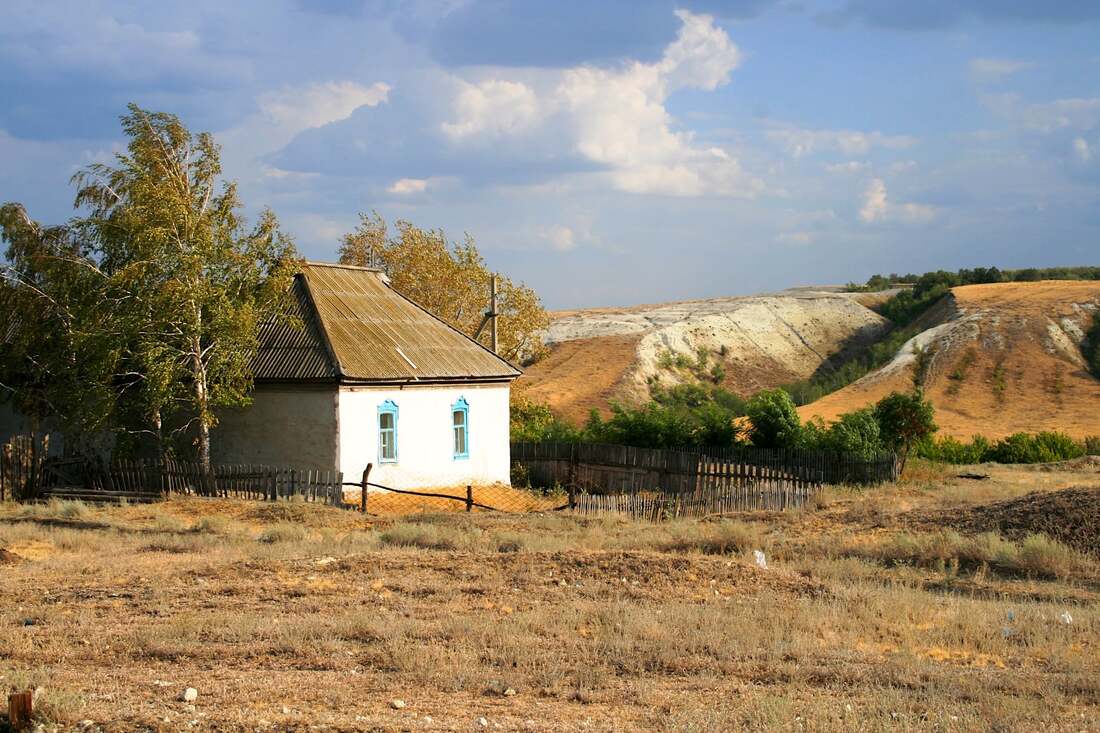