Catherine the Great's Manifesto of 1763 promised the freedom of religious worship:

We grant to all foreigners coming into Our Empire the free and unrestricted practice of their religion according to the precepts and usage of their Church. To those, however, who intend to settle not in cities but in colonies and villages on uninhabited lands we grant the freedom to build churches and bell towers, and to maintain the necessary number of priests and church servants, but not the construction of monasteries. 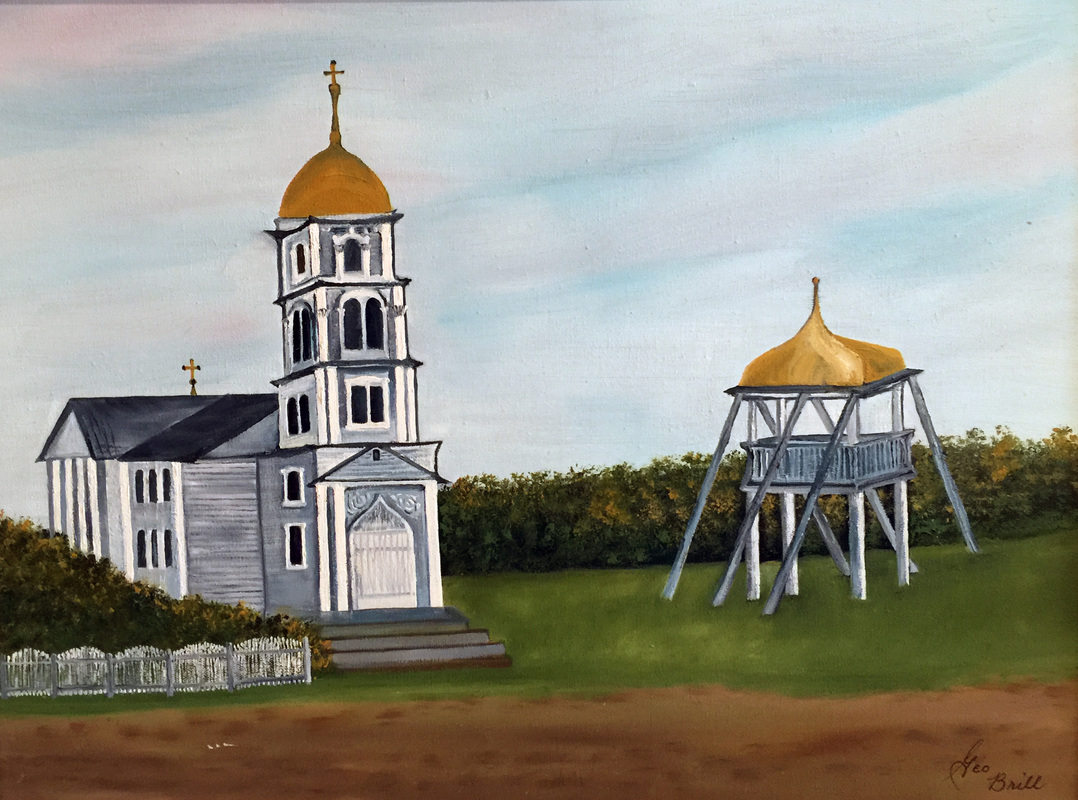 Painting of the Norka church and bell tower by George Brill, son of Conrad Brill. Used with permission of the Brill family.
Religion and the church was an important part of the colonist's intellectual world and helped sustain their moral standards, language and ethnic character.

Practically all of the colonists claimed a religious affiliation. Based on the 1767 Census Revision, the overwhelming majority of the 218 families that settled in Norka were of the Reformed Tradition. Only 16 families (7 percent) identified themselves as Lutherans and 6 families (3 percent) as Roman Catholics. Many of the Catholic heads of household were craftsmen from non-German countries or provinces such as France, Flanders, and Brabant.

Many colonists were part of the Pietism Movement that had its origins in 17th century Germany. This was a movement that emphasized the need for a "religion of the heart" instead of the head, and was characterized by ethical purity, inward devotion, charity, and even mysticism.

Religious life in Norka was formed by pastors who were influenced by the Moravian Brethren faith. Many of Norka's spiritual leaders had connections to the Moravian seminary in Barby and the Moravian settlement of Sarepta, Russia which was located on the southern fringe of the Volga German settlements.

By 1875, a growing religious sect, known as the Der Brüderschaft Versammlung (the Brethren), comprised 26 members in Norka. These people were known as Ausgänger (outliers) by the established church officials. Tensions between the Brethren and the church officials would prompt many to emigrate from Russia.

By 1906, there was a total of 23,179 parishioners  (22,794 Reformed and 385 Lutherans) residing in the Norka Parish which included the colonies of Huck and Neu-Messer at that time. Neu-Messer was incorporated into the Norka parish at its founding in 1863. At the time, Norka was the second largest parish in the Evangelical Lutheran Church of Russia. Only the Frank parish was larger (28,039 members).

At the end of the 1920's, official church life was being systematically destroyed in Norka and throughout the Volga region by the Soviet government.  Gerd Stricker writes, "Half of the parishes were vacant by 1923 and most of them were vacant by 1927/29."  The pastors were arrested and exiled, disappeared, or were murdered.  The people of Norka became "sheep without shepherds" and their faith would be severely tested in the years ahead.