From its founding in 1767 up to 1914, there were no medical doctors in Norka.  As they had for centuries, certain people in the village, known as Braucherei, practiced folk medicine to cure common ailments.

Dr. Timothy Kloberdanz, a noted authority on Volga German folklife, cautions that there is often confusion between the Volga German individuals who truly practiced black magic (Hexerei) and those folk healers and midwives who engaged in white magic (Braucherei).  It was believed that the Braucher (a white witch) could counteract the effect of a hex (a black witch). 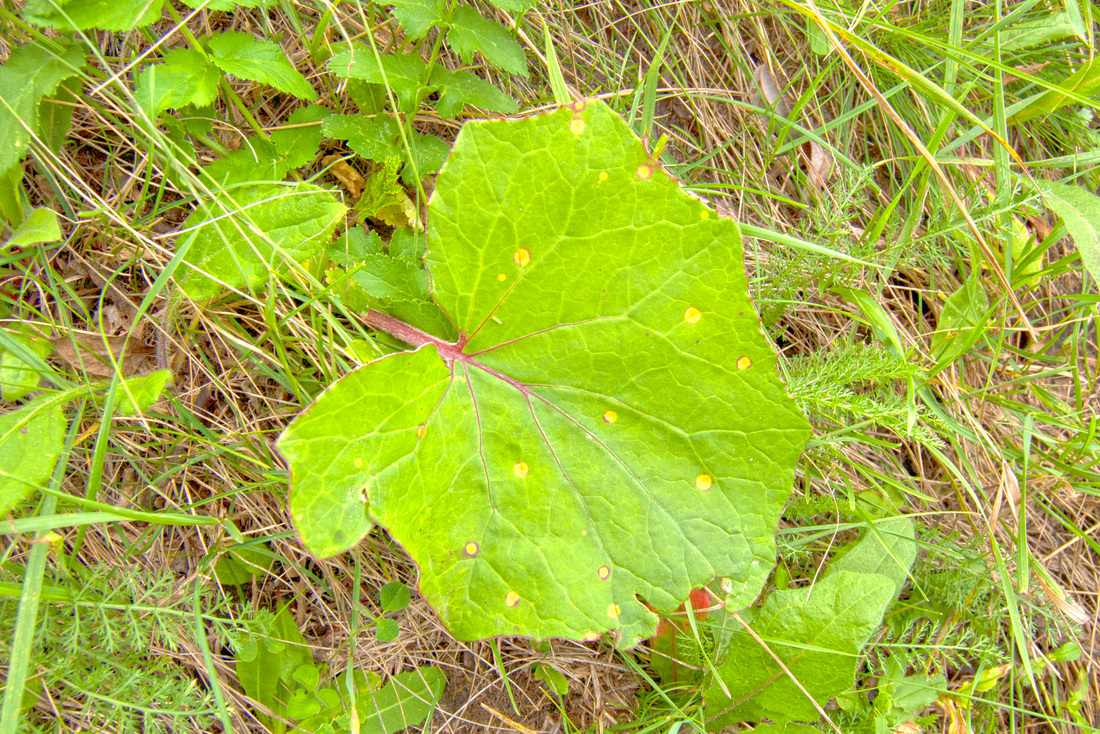 According to Konrad Urbach, the leaf of this plant (found growing in Norka in 2006) was placed over cuts to make them heal quickly. Courtesy of Steve Schreiber.
The excerpt below is from an interview with Catherine Bauer on October 14, 1938.  Catherine Bauer was born in Norka in 1853 and lived there until 1892 when she emigrated from Norka to the United States and settled in Lincoln, Nebraska.  The full interview is posted on the Library of Congress website.

We lived in Norka, Russia, and did farming and weaving. Times were not good there and we did not want the boys to go in the army. We couldn't do as we wanted to there either. The schools were poor and did not teach much.

I took care of many sick people and helped in childbirth. There was one doctor in each community but women neighbors did most of the work for the sick. I liked this work and made up medicine for lots of people.

It doesn't seem like people got sick in Russia like they do here and did not have the nervous diseases. These remedies were always good.

Fried onions for a cold.

Mud for bites. For headache and stomache ache we just bore it out. No medicine. They did not know much about appendicitis and didn't cut people open. Bowel trouble was hardly ever heard of. People ate coarse black bread and boiled vegetables more and worked lots. Gall trouble was the worst disease there and killed more people. The water was poor and they got most of their trouble from it. Kerosene was given for croup.

Homemade butter for cuts and wounds.

Hard boiled egg yolk, wax, butter made into a paste was used for burns and it was very good.

Professor Charles Gebhardt collected many stories of Hexerei and Braucherei beginning in the 1950's from people who had lived in the neighboring colonies of Huck and Norka. Gebhardt writes that the Braucher would often recite poems to cure an illness and he provides a number of examples, including the following for yellow jaundice (in dialect and English):

(The name of the patient) Here I lay in the position of the Holy cross.
I have been measured (using a rope and cutting it to the length of the patient)
The treatment for yellow jaundice has to suffer all bad illness,
It wants to bury me,
But no, I will bury it.
In the name of the Father, Son, and Holy Ghost

Conrad Brill was born in Norka in 1895 and he recalls the following stories of Braucherei in Memories of Norka:

When we get into the subject of folklore, it must be remembered that in the days our ancestors lived in the Volga area villages, they were totally on their own.  Neighbors helped each other in any way possible, as long as it didn't infringe too much on their own family activities or comfort.  Most of the immigrants were hard working people who came to depend on each other for exchange of help with their farm work, advice if ones neighbor had illness or death of one it's family members.  It was a rare village that had a doctor with any medical schooling.  Most learned from just everyday participation of helping others in the village overcome some medical problem with treatments or application of medical things someone else said had helped so and so with a similar condition.

One of the first treatments that midwifery used, which sounds nasty today, concerned getting babies through the colic.  This they did by scraping bird droppings from the board fence and mixing it with some milk and feeding it to the babies.  It was said to make the baby sleep peacefully and awake cured.  This never bothered me in the old country, but after we got to Portland and I discussed this with my family Doctor, Otto Uhle, one time while visiting at his home and asked him if he had any insight an why they would give their babies this treatment (he also was a German).  He thought that it was probably a handed down cure and probably did work.  The common flower in a Volga Germans yard in Russia and I recall most of our neighbors who had a yard full of flowers in the United States during the depression era, was poppies.  We had neighbors who used the milky substance from the poppies for medicinal purposes.  Today we know that its a big part in the making of heroin and many other medicines for doing good, as well as for illegal purposes.  The doctor thought that maybe the birds had eaten and digested the poppy seeds, thus weakening it enough so that substance in the birds droppings could affect the child’s system enough to make it sleep in a drugged state, as it would today from prescription drugs.  I suppose this is similar to Indian cures.

The art of "bleeding" a patient with high temperature was developed and practiced until after WWI and then we started to find fault and discontinue it, but recently I heard some doctors are using it again.  The people who did it in the villages weren't doctors as we know them today, but ordinary citizens.  Barbers did a lot of this work even in the United States in predominantly Volga German neighborhoods.  They called it "schreffing" and it was designed to make small incisions on a fingertip, which was allowed to bleed and supposedly would bring the fever down.  My Uncle Weber did schreffing in Norka, and some of his equipment is still in the family heirlooms.

Placing a foot you had just badly chopped with a sharp ax into fresh cow manure, sounds like a quick way to get infection and die, but was the principal method of dealing with a large bad cut in the earlier days.  Usually they wrapped a clean cloth, maybe a babies diaper, orholzsduch (scarf), around the cut, wrapped tightly, then placed the foot into a container large enough to cover the area with the warm cow dung, if available.  Maybe it was supposed to act as a poultice and draw infection away as it healed, but I don't think a doctor would go along with that theory today.  I myself have seen cuts which left four inch scars, wrapped tightly and taped well and never seen by a licensed doctor, as late as 1937 in our own neighborhood in this country.  If a parent didn't have the money to pay a doctor, they found someone who would supply aid or counseling in the neighborhood for almost any sickness.  With proper medical attention in the old country and even to our earlier people over here, most of the deaths to youngsters before 1940 wouldn't have occurred.  No wonder so many of our folk died at a young age.

A common remedy for burns, pinkeye and other eye maladies, was to flush the eye out with your own urine.  I have seen this done many times by different people.  I believe that the first time a child burned himself on the hot stove on a winters night, his parent told him to get the potty and go wee wee on the burn and it would quit hurting and feel better and usually it did.  Warts, boils, carbuncles and such were treated in many like methods, but I remember best that you cut a potato in half and held it to the wart giving it a quarter turn as you said, "in the name of the father, the son and the holy ghost."  You then buried the potato.  This you did for seven nights if you remembered it that long and didn't have to start over.  If the parents had the garden planned, you could grow nice potato plants from each night’s buried potato providing you placed them in a straight row.

I can't understand why some wise old Volga German didn't come up with manufacturing baby food.  The mothers used to chew up small amounts of vegetable, meat and bread, until chewed fine, then she would feed the baby out of her mouth with a spoon, like a bird feeds it's young.  I have seen many mothers do this and if the mother had things to do and didn't have time, one of the elder children would substitute for her.  You could almost pick out people who have done this, or been fed this way in their past, because they never sit and eat their food separately.  Instead they usually take some of each into their mouth and eat the items together.  Separately, the items wouldn't be as tasty as mixing them all for good taste.

Breast-feeding is starting to come back. When I was a child I never knew anyone who wasn't breastfed.  We had poor women in our neighborhood that had babies almost yearly.  Some women would go into another room when they nursed their babies, others placed a baby blanket, or holzduch, over the baby and breast. There were some women who never covered up and it was never frowned on, but the one incident I will never forget, is of a neighbor lady, who was breast feeding her one infant while rocking in her rocking chair, every mom had one for rocking baby, this ladies older child stood on the side rungs of the rocking chair, beside it's mother begging for a breast, and she laid the other breast across her arm or shoulder and that child nursed as she rocked and nursed the infant.  I saw a wife rocking a child to sleep in a baby crib with her foot, while she rocked two others to sleep on her lap, while singing them religious songs.  Many times a neighbor would breast feed a new baby for a mom with milk shortage.

The Volga Germans used mint (especially peppermint for a variety of uses. A tea brewed from the leaves was a traditional cure for colic, intestinal complaints and stomach problems. Sprigs of mint were also used to repel evil influences. 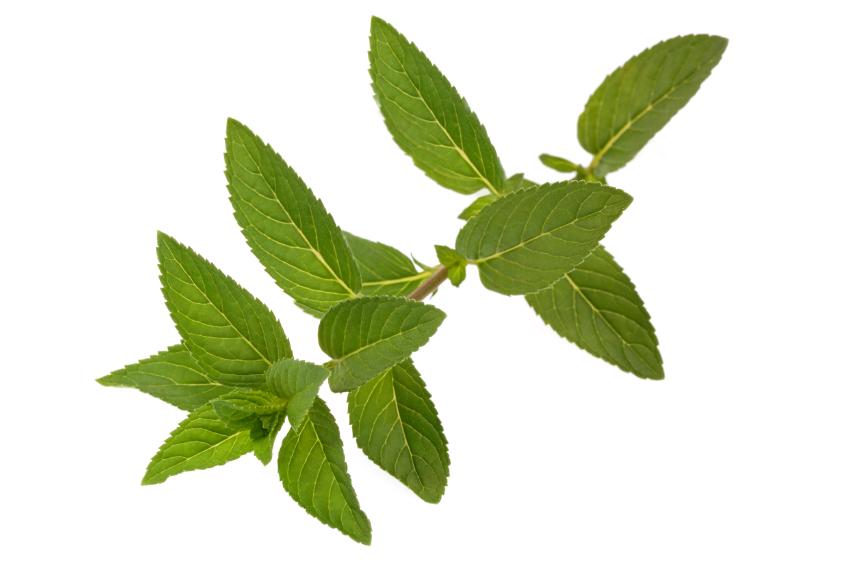