German-Russian . . . communities were held together by specific human and divine values. Not least among these values were their dialects which were couched in spiritual, moral and ethical beliefs and feelings.

The German colonist brought numerous dialects with them to Russia where their isolation created dialect islands cut off from their homeland. Most colonies were comprised of people from many regions of Germany and western Europe.

Norka was an exception in that the overwhelming majoring of people had migrated from Hessen and Isenburg providing closer dialect and cultural ties amongst the colonists. The Norka dialect was distinct from the German spoken in the surrounding colonies such as Huck and Frank. There was much good-natured banter between the colonies about their distinct dialects.

Catherine's Manifesto had granted freedom of religion and the right to establish local institutions without interference. Although not specifically stated, the Manifesto implied that the colonists were free to maintain their language which they viewed as integral to their religious beliefs. From the start of settlement in Russia, all church and school activities continued to be German.

The church sponsored schools taught the children Hochdeutsch (standard German) which was like a second language to the dialect they spoke outside of school.

After over 100 years in Russia, the reforms of 1871 began to put pressure on the German colonists to learn the Russian language along with their native dialect and standard German. Basic Russian language skills began to be taught in the village schools. In Norka, the so called "Russian" school was established about 1905.

Two of the older Norka schools were replaced with new ones in about 1915. One in Oberdorf, and one in Unterdorf. The new and larger Russian school had been built next to the church in 1905 when we were ordered to learn the Russian language along with the German we had been wholly learning previously.

In 1909 I had to go to Russian school in the Mitteldorf. Although our German folk had been in Russia for over a hundred years, we didn't fraternize with the Russians, dealing with them only in business matters...

Despite the efforts of Russian officials, few of the colonists became proficient in the Russian language. Both in Russia and in their new settlements in North America, the Volga Germans firmly maintained their dialects. This fact is confirmed by Hattie Plum Williams in her book, A Social Study of the Russian-German, which was published in 1915. Of the German-Russian immigrants in Lincoln, Nebraska (including many from Norka) she wrote:

Many people who lived in the city for years are ignorant of the fact that the mother tongue of these foreigners is German instead of Russian. Not infrequently some well-meaning citizen suggests that a pamphlet, or address, or bulletin be printed in the Russian language and distributed among the people down in the foreign settlements so that they may get the benefit of it, all unconscious of the fact that not one in a hundred can understand, speak, or read the Russian language.

Although the colonists held tightly to their dialects, many Russian borrow words crept into their vocabulary over the decades. Examples include: Samovar (tea making apparatus), arbuse (watermelon), ambar (granary), plotnick (carpenter), bierock (pirog), ruble (a monetary unit), desyatina (a unit of land), pud (a unit of weight), verst (a unit of distance).
Professor Georg Dinges was a principal researcher of the Volga German dialects in the 1920's. He wrote articles about the Volga German dialects to affirm their value in a time of severe pressure to not only assimilate to the Russian language, but also to conform more to the standard German language found in books. The Volga German dialect map published here accompanied his article Über unsere Mundarten ("About Our Dialects"). Dinges identifies the dialect features of Volga German Mother Colonies by using complex symbols and color to describe how keywords are pronounced. To understand the dialect features of a particular village, you have to deconstruct the symbol. The Norka linguistic symbol can be deconstructed as follows: In Dinges' accompanying map of German dialects, Norka's dialect characteristics show them to fall within the blue-outlined area of the German homeland which is identified as West Middle German centered on the area northeast of Frankfurt which is consistent with the known origins of most of the original Norka colonists. 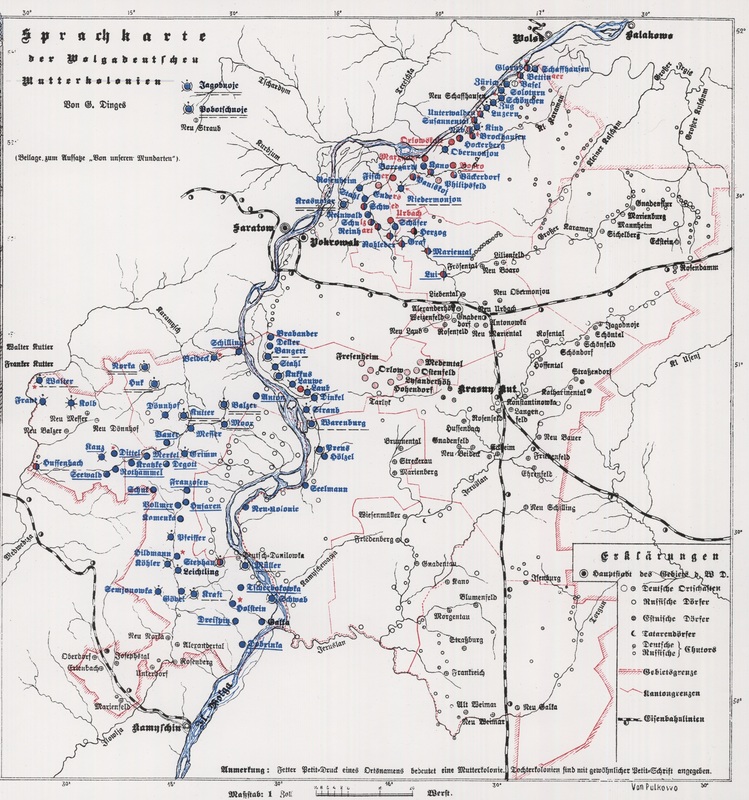 Volga German dialect map by Georg Dinges.
Dr. Mary Lynn Tuck writes the following conclusion in her doctoral dissertation based on firsthand interviews with immigrants or descendants of those born in Norka who were living in Lincoln, Nebraska in the 1980s:

Linguistically, the dialectal features generally fit the Middle-Hessian dialect area of Germany, while others are found in Hesse-Nassau and South-Hessian areas, some find no exact correlation in Germany.

This interview with Heinrich (Henry) Krieger of Norka, Russia was recorded in Portland, Oregon on February 2, 1974 by American Historical Society of Germans from Russia (AHSGR) members: Wilhelm Krieger, Peter Koch, Fred Krieger, Herman Dietz, Otto Weigel and Mr. Armand. Recording provided courtesy of Joanne Krieger, Portland, Oregon.
A very large percentage of the colonists that settled in Norka in 1767 originated from what is now the state of Hessen in Germany. The Hessisch-Deutsches Wörterbuch (Hessen dialect - High German dictionary) is a very useful resource for looking up the meaning of dialect words not found in standard German dictionaries.