When the aspiring colonists accepted the offer of Catherine's Manifesto, they took more than just physical possessions with them to Russia. They also took their rich tradition of singing folk songs and sacred hymns — especially the German hymns composed following the Protestant Reformation that began in 1517.

Martin Luther, the founder of the Protestant movement, had a strong interest in music and introduced congregational church singing to replace the Catholic Mass. For some people, Kirchenmusik (church music) may have had a stronger influence during the Reformation than sermons or writings.

​Luther composed some of the most inspiring songs of the 16th century including the powerful Ein feste Burg ist unser Gott (A Mighty Fortress is Our God).

Between 1524 and 1570, at least 288 different German hymnals were published. Of that total, 209 were Lutheran, 24 Bohemian Brethren, 7 Catholic, and 35 Evangelical. The large number of Protestant hymnals published underscores the tremendous impact of the Reformation and the movable type printing press developed by Johannes Gutenberg. 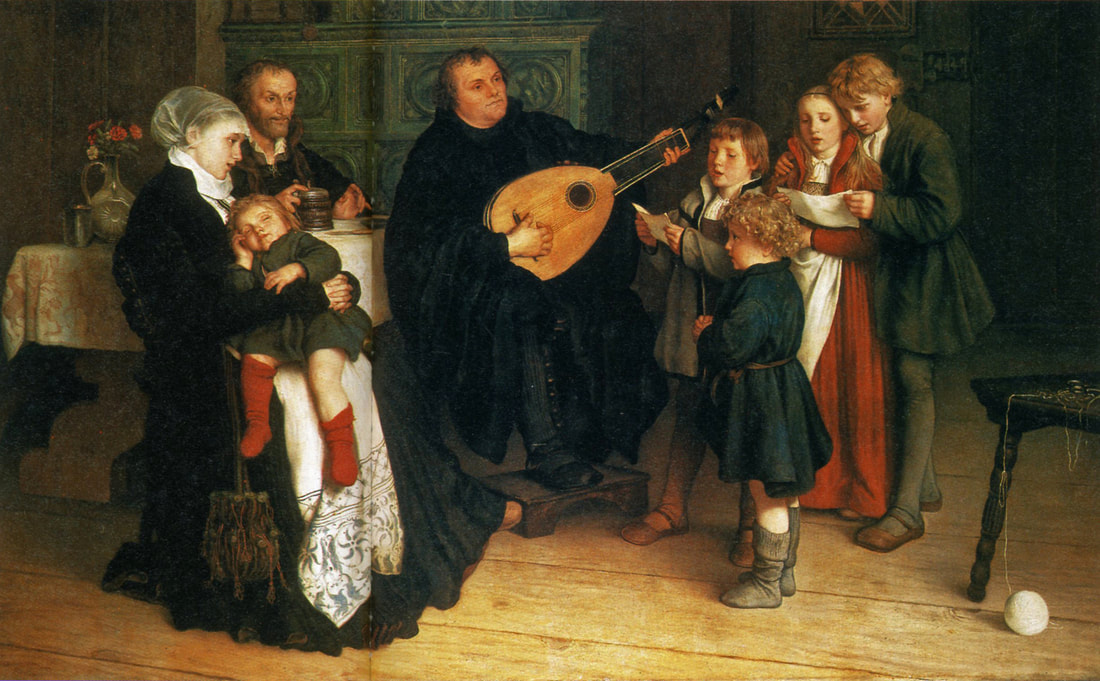 Luther im Kreise seiner Familie musizierend (Luther Making Music in the Circle of His Family) by Gustav Spangenberg (1875). Wikimedia Commons.
The majority of the people that settled in Norka adhered to the Protestant Reformed faith which had been founded on the ideas of the Protestant reformers John Calvin and Ulrich Zwingli who believed in a very simple and democratic church organization.

The people of Norka had also carried with them to Russia the works of Paul Gerhardt who was born in Saxony in 1607. Two of his best known songs, Wach auf, mein Herz, und singe (Wake Up My Heart and Sing) and Befiehl du deine Wege, (Let God Guide Your Path) were favorite hymns in Norka and throughout the Volga colonies.

Some Volga German music was borrowed from the Moravians who were under the leadership of Count Nikolaus Ludwig von Zinzendorf. Zinzendorf was born in 1700 in Dresden and he established a Moravian colony, Bethlehem, Pennsylvania, in 1741. Another group of Moravians (the Herrnhut Brethren) established a colony in the Volga region at Sarepta in August 1765. Zinzendorf wrote the famous hymn Jesu, geh Voran (Jesus, Lead the Way) which was often sung at wedding ceremonies.

Another great composer who influenced the music of the Volga Germans was Martin Rinkart who wrote the majestic Nun danket alle Gott (Now Thank We All Our God).
In the early decades of settlement in Russia, the Protestant churches used the Marburger Gesang-Buch (Marburg Hymnbook - also known as the Marburg Reformed Hymnbook) which was first printed in the mid-1500s. Editions from the 1700s were specifically printed for use in Hesse, Hanau, the Palatinate and adjacent provinces. Most of the colonists who settled Norka originated in these areas and some probably brought copies with them. Early pastors of the Norka church would also have had copies of this book. In addition to hymns, the Marburg book contains the Heidelberg Catechism, morning and evening prayers, and gospel lessons. 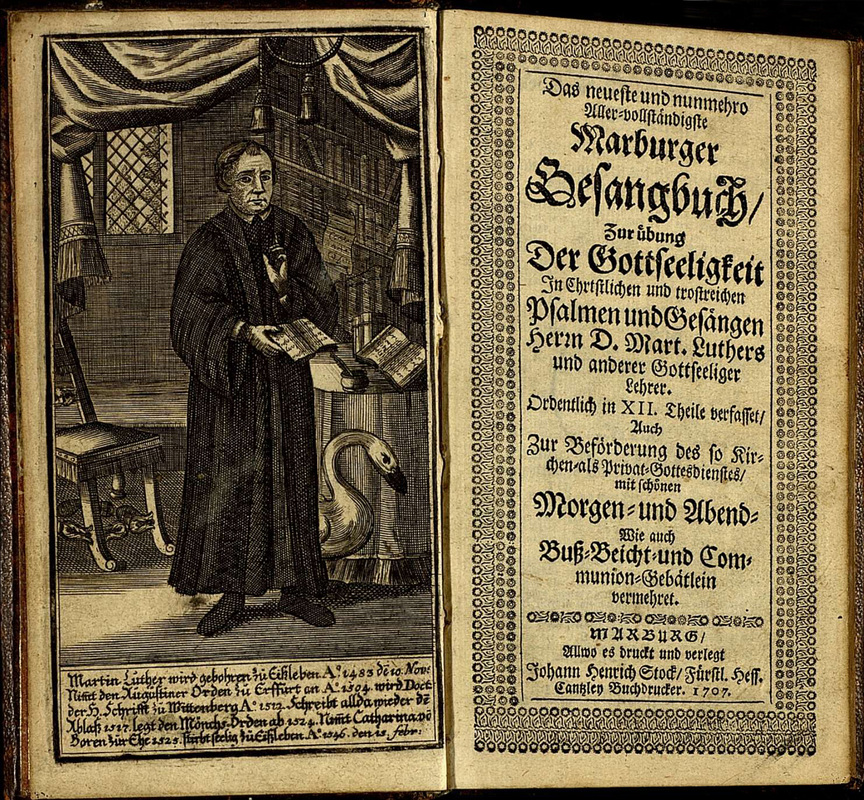 Title page from a "Marburger Gesangbuch" printed in 1707. Source: Göttinger Digitalisierungszentrum website.
The Wolga Gesangbuch (Volga Songbook) was first published by the Moscow University Press by 1853 (the earliest edition found by this researcher). The songbook was likely published at the direction of the Moscow Lutheran Consistory who was responsible for the Protestant churches in the German colonies at that time. The subtitle of this songbook is: Sammlung christlicher Lieder für die öffentliche und häusliche Andacht, zum Gebrauch der deutschen evangelischen Kolonien an der Wolga (Collection of Christian Songs for Public and Domestic worship, for use in the German Protestant Colonies on the Volga). The book is filled with 878 hymns, categorized by type, and was used by the Evangelische (Protestant) churches in the Volga colonies. The songbook contains the lyrics for each song, but there are no musical notes. Melodies are suggested for some songs and the author or source of the song is often shown. The congregation knew many of the hymns by heart and only used the book as a reference.

It is clear that much of the music in the Wolga Gesangbuch contained the religious fervor that was expressed by the early master songwriters of the German Protestant movement.

Two of the most treasured songs were Gott ist die Liebe (God Loves Me Dearly), a traditional Moravian or Thüringen tune of anonymous origin with lyrics written by August Dietrich Rische in 1852, and, So Nimm Denn Meine Hände (O Take My Hand) written by Julie Katharina von Hausmann with a melody by Friedrich Silcher. Neither of these songs are included in the Wolga Gesangbuch. 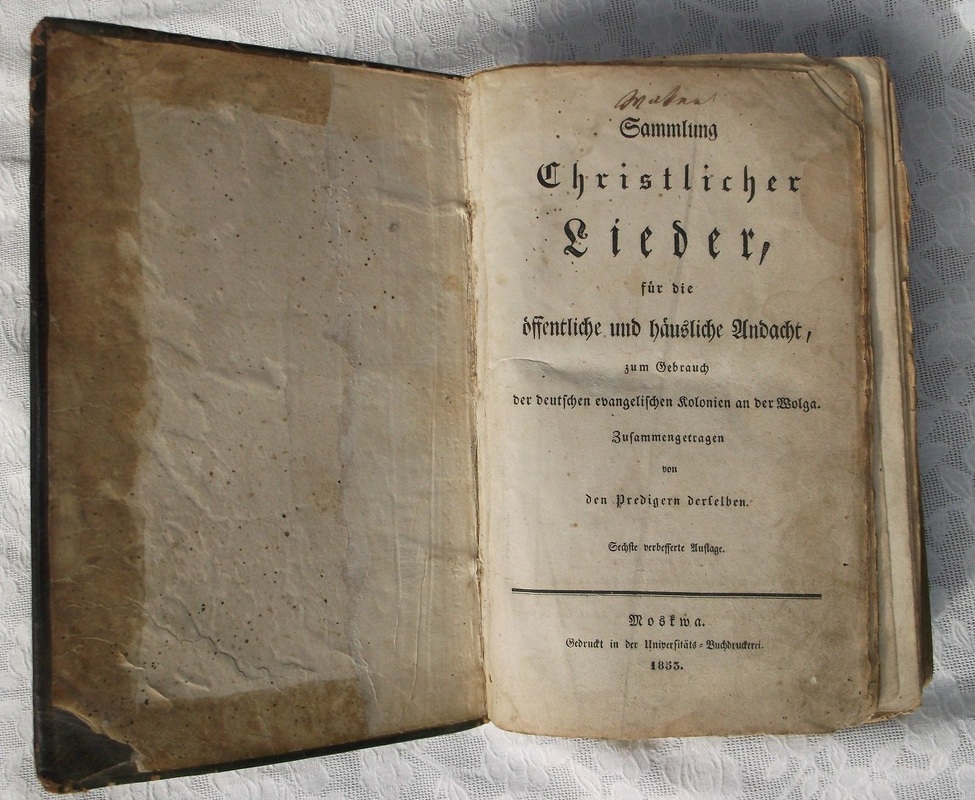 Title page of an early (1853) edition of the "Wolga Gesangbuch" published at the Moscow University Press. Courtesy of Steven Schreiber.
In 1914, Pastor Eduard Seib wrote the following about music and singing in the Volga colonies:

"On Sunday morning large crowds of people fill the streets making their way to attend church. Every person carries a Bible or Wolga Gesangbuch. Men held the books under their arm and women in their hands. In summertime the women also put pungent herbs (such as Riechkraut) in their hymnals so that they can refresh themselves and in wintertime they put a white handkerchief in them.

Everyone sits quietly and meditates in preparation for the service. Then the schoolmaster’s voice is heard from the organ loft. He announces to the congregation that: “To start our worship service we will sing the hymn listed as number . . . ” or “To begin our service may the Christian congregation enjoy singing the hymn listed under number . . . " and if a verse of the hymn of the day is sung after the sermon, many elderly schoolmasters announce this by saying: “We will sing verse . . . from the hymn which we have begun to sing.” As a rule hymn boards were not used.

At the signal from the schoolmaster, hundreds or even thousands of voices fill the church. The singing was so impressive that it "penetrated to the very marrow."  Volga Germans like to sing and sing loud. The ruddy complexions of the church attendees are witness to the fact that singing is an important part of worship. Parishioners are serious about singing. It is said that people brace their legs on the back of pews in order to be able to sing with all their might.

"It is truly a joy to preach in the colonies along the Volga!" 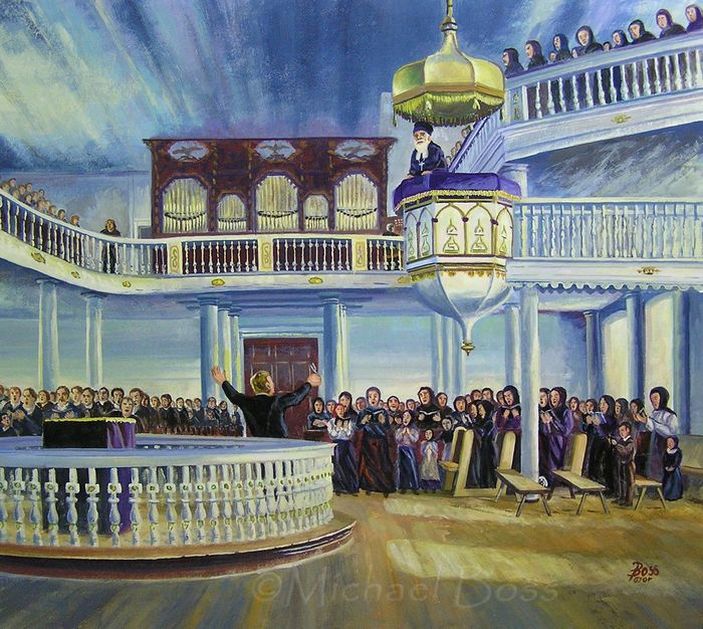 Reeder, Kent. The Necessary, Relevant, & Practical Digital Media for the Development and Dissemination of a Worship Compendium in the 21st Century: A Hymnal Rebuild from the Cloud Down. Thesis. Mequon: Wisconsin Lutheran Seminary, 2012. Print.