History > Planning for the Colonists

This article was written for Steven Schreiber in 2002 by Vera Beljakova-Miller and is based on her personal research and the book Deutsche Architektur an der Wolga (German Architecture on the Volga) by Dr. Sergei Terjochin. Dr. Terjochin graduated from the Saratov Polytechnical Institute, as well as from the Institute of Architecture and Town-Planning in Moscow. Dr. Terjochin is the great-grandson of Volga German colonist Andreas Stoll, who operated a steam mill together with his brothers since 1897 in Pokrovsk, Russia (now Engels).
The Russian government did a great deal of planning for the settlement of the Volga colonies in hopes of creating an orderly development.

One often hears that the Volga Germans arrived to find no housing on the Volga, quoting Adam Giesinger from his book titled from Catherine to Khrushchev, "in most cases there was no housing as promised by the agent," who in turn refers to the work by Gottlieb Beratz (The German Colonies on the Lower Volga).

The operative word here is "as promised by the agents" – who, after all, were "salesmen" trying to recruit as many new settlers as possible for their own financial gain. The recruitment agents had contracts and quotas to fulfill, and were meant to deliver a certain agreed amount of new settlers. They were thus prone to over-sell and exaggeration.

In fact, Catherine the Great's Manifesto of 1763 did not promise ready built housing. No country, especially in the 18th century, built housing for new settlers - not even enlightened Great Britain, which dumped its 1822 settlers in South Africa on a raw coastline in amidst warring native tribes. It was very unusual at this time for a state to provide housing for new settlers. Giving them free land was considered generous enough. Giving them building materials or money, was deemed most kind. Nonetheless, there is evidence that both housing and materials were provided to the colonists over time. 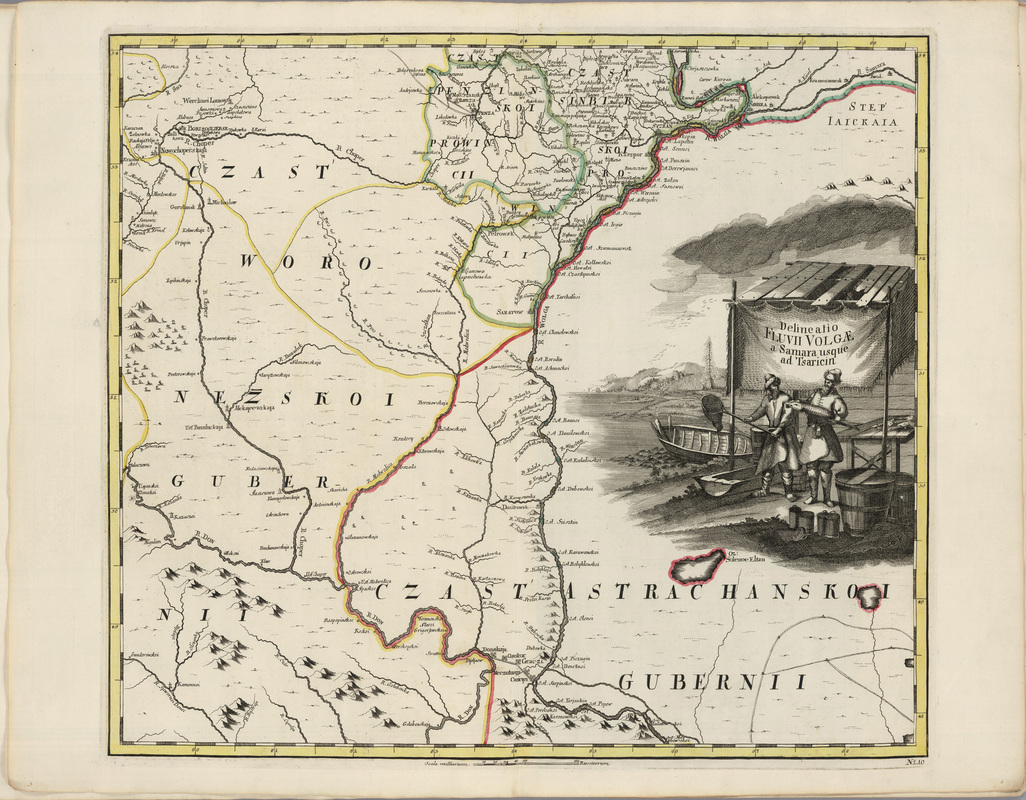 Map showing the area around the frontier town of Saratov in 1745, prior to the settlement of the Volga Germans beginning in 1764. No settlements are shown in the area where Norka was established in August 1767. Source: "Delineatio Fluvii Volgae a Samara usque ad Tsaricin" from the David Rumsey Historical Map Collection.
A new chancellery was founded in St. Petersburg for the guardianship of all foreign settlers (not only the Volga Germans) after the first two manifestoes in 1762 and 1763.

The first settlers arrived in 1764 and continued arriving in the Volga (Saratov) region until 1773, but now in reduced numbers. In total 5,549 families arrived or 30,930 persons, with each family entitled to 30 free desyatinas (about 1 hectare or 3 acres).

Count Grigory Orlov, who oversaw this influx of settlers, decided already in 1764 that one needs proper land surveying and town planning for the future mushrooming new villages. (Note: Orlov made a report on conditions in Norka in 1769) 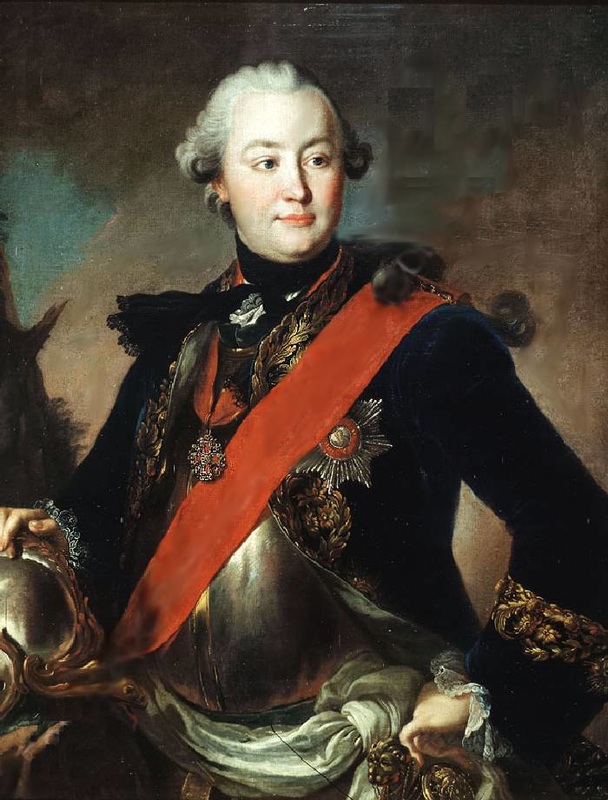 Portrait of Count Grigory Orlov, by Fyodor Rokotov. Source: Wikimedia Commons.
To this purpose, Orlov congregated a team of experts from the Cadet-Engineers and Artillery Corps of the army. In those days, it was the army that performed the state’s civil engineering projects - all were expert land surveyors and geodetic surveyors.

Count Orlov collected a team of 24 under the leadership of Colonel Ivan (Johann) Reis, a man of the noble rank, a collegial assessor, with a salary of 600 rubles per year. Reis was sent to Saratov in the spring of 1764 to make the necessary preparations to receive the colonists, inspect the steppe, and find places to settle the foreigners. Reis also dispatched detachments of surveyors to survey the area of settlement.

The team headed by Reis included various other ethnic Germans of an earlier professional vintage:

Geodetic surveyors were: O. Binse-Weden and four Russians, but the other seven surveyors are lost to history.

These men were professional (military) engineers and officers, many of whom spoke German, and they were now instructed to design new villages. Von Liphard and von Rehbinder, for example, belong to famous old Baltic-German nobility.

Their task was to find suitable locations, survey them and offer advice. The land surveyors had to draw up the land. Together the team had to proposed lay-outs for villages: housing, church, school, meeting hall, plough land, meadows, pastures, hay-meadows, woodland (where applicable), as well as ditches and moats for protection, not forgetting sheds, farm-yards, stabling, etc.

All along, the traveling schedules and routes of the settlers were planned in such a manner that the new settlers would not arrive on the Volga before the April-May time frame, which is the beginning of the mid-Volga construction season. Wintering quarters had been constructed on the Volga, but were not reached in time before the river froze, hence the settlers over-wintered in Russian villages instead.

On arrival in Saratov, settlers were housed in the army-barracks - 16 long ones outside the city, where their particulars were noted down and they were sorted into groups to make up future village populations, according to friends and families and religious groupings.

The elders (Vorsteher) of the teams, who were mainly the same elders whom the travelers had chosen on their ships, were shown the available sites on maps and the plans for selecting their village location, mostly on the Volga or other small rivers or in dales.

We do not know how well elders understood map-reading. However, first come, first served, and the earlier settlers certainly had the widest choice of land and location.

After the site-selection and calculating the numbers of future residents, the elders were presented with some 12 blueprints of village layouts which would suit their given numbers. Again the elders were asked to select. These plans are still available, and are used by the author.

Then the land was pegged out by Russian engineers including fields, houses, buildings, so that the settlers would not be able to argue among themselves or fight over parcels of land or cheat one another.

Building material was provided "if and when available" - all biographies of this region are united in describing the lack of lumber. Lumber was floated down the Volga River from up north, but there was never enough. Hence most of the local abodes were constructed of mud-and-wattle.

Some villages were better provided for than others. Settlers recruited by the Russian "Crown" (such as Norka) got a better deal than "Agent-director" settlers. In many cases the Crown had met its obligation and provided housing, unlike the agents who seemed more disorganized or plain disinterested, lacked concern or maybe were just very inexperienced, for indeed, how does one expect French barons to understand village construction for Germans in Russia’s frontier land.

Next, a most important point. The Russian State knew and understood that the settlers would only be able to build "temporary" accommodation from plan initially, before the onset of autumn, with August-September being the end of building season and beginning of the rainy period. All slush and mud everywhere.

The Russian State knew and understood that it will take the settlers up to 3 years to 'settle' down and construct "proper" accommodation and buildings.

In the interim, the Russian State sent in its own state-serfs from state-land and state-villages to teach the colonists how to build temporary accommodation, which was then widely used: wattle-and-mud huts. The state-serfs sent in to teach and help the colonists were builders, carpenters, smiths, wagon-builders, who also had to show the settlers how to adapt to Russian climatic conditions.

Johann Reis was responsible for surveying, laying-out and pegging-out 106 settler-colonies, in just two 2 years, up to 1767 - no mean feat!

On completion of the project, Reis and his team returned to St. Petersburg to produce a huge map, showing all the locations of the new colonies decorated with smaller individual sketches and maps of the lay-outs for each and every village, even showing all the individual homes and farm yards. 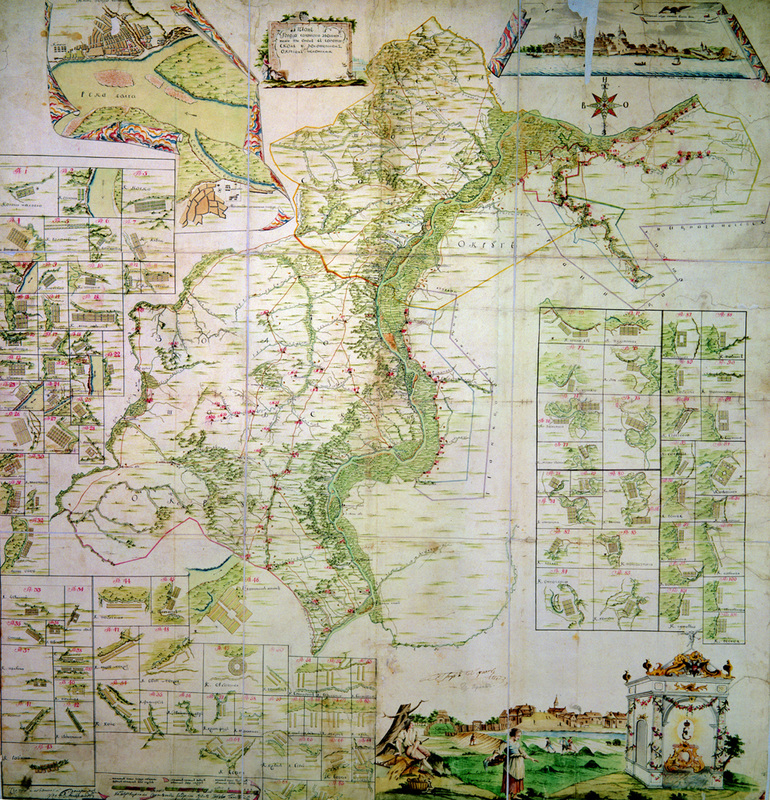 The map produced by Johann Reis titled "Deutsche Kolonie im Wolgagebiet 1768." Lithographie im Russichen Militaerhistorischen Archiv, Moskau. This map can be purchased from AHSGR (Map #62).
The branch-office of the Guardianship Chancellery of the Foreign Settlers had a staff of 27 in Saratov, including the chief judge, the secretary, archivist and translators...it even had a small company of soldiers to protect the settlers, which – however - proved inadequate when a few years later the Pugachev Rebellion (“Peasant Wars”) ran amok, until Catherine II sent in her most able generals….several of whom also carried German surnames, like the renowned Michelsohnen.

Russia often settled new villages with foreigners, prisoners-of-war (Swedes), Russian state-serfs and retired soldiers, while private landowners settled new villages on newly-bought land with their own serfs from other estates. None, of course, have “pre-built” housing! That was the task of the new-comers.

It is quite clear that Russia intended the settlers to arrive at the beginning of the building season and erect their own initial temporary homes, similar to those inhabited by Russian peasantry, who lacked lumber. The wattle-and-mud huts were envisaged to last some 3 years, during which period the settlers would erect more permanent structures. Some colonists, though, did find pre-built housing, which was put up by the local Russian peasants in anticipation of the settlers’ arrival.

But German Russian history books talk of the settlers feeling let down because there was no housing waiting for them, therefore my conclusion is that the agents had over-promised services and infrastructure to the German settlers, in order to increase recruitment numbers.
Last updated April 22, 2016.