Cleora Reuscher was born in Ramona, Kansas, on June 5, 1918, to Emanuel Reuscher and Mary Reuscher (née Schnell) who were from Norka, Russia. In 1920, the family moved to Lodi, California, where she graduated from Lodi High School in 1936. 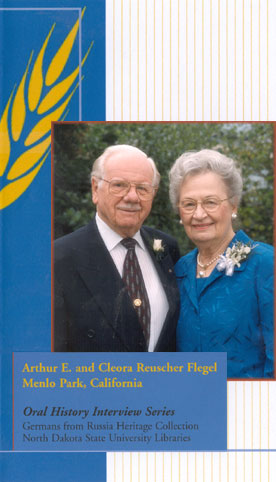 Cleora met Arthur Flegel and they were married in Lodi on April 27, 1940.

Settling in Menlo Park in March 1954, Cleora and Arthur co-founded Flegel's Home Furnishings, now under control of their son, Mark. In addition to the flagship Menlo Park store, there are Flegel's stores in San Rafael and San Ramon.

Cleora, more commonly known as Cleo, was blessed with a warm and winsome personality and easily made many friends.

Among her talents, Cleo's primary hobby, still-life oil painting, was a gift that will long keep her in the memory of her appreciative family.

With Arthur, she enjoyed membership in the American Historical Society of Germans from Russia. As a result of several research trips to Germany and Russia, she was able to trace her ancestry back many generations to its places of origin. The Flegel's have made significant contributions to AHSGR over the years.

A videotape of the Oral History Interview Series: Arthur E. & Cleora Reuscher Flegel is also available from The Germans from Russia Heritage Collection.

The Germans from Russia Heritage Collection