Prayer Hour for the Farmers (Ackerbestunde)

​As winter eased its icy grip on Norka, thoughts began to turn to the start of spring plowing. A great deal of attention was paid to the preparation of the land. The soil needed to be dry, but not too dry, since summers were very hot and rainfall was rare.

On the chosen day, certain farmers left their homes in the early morning to plow the first furrows in the fields that lay far beyond the village.
​
In preparation for the work, wagons, horses and oxen were made ready. Before departing for the fields, the farmers participated in a prayer hour (Ackerbestunde). This was a holy day for all farmers. 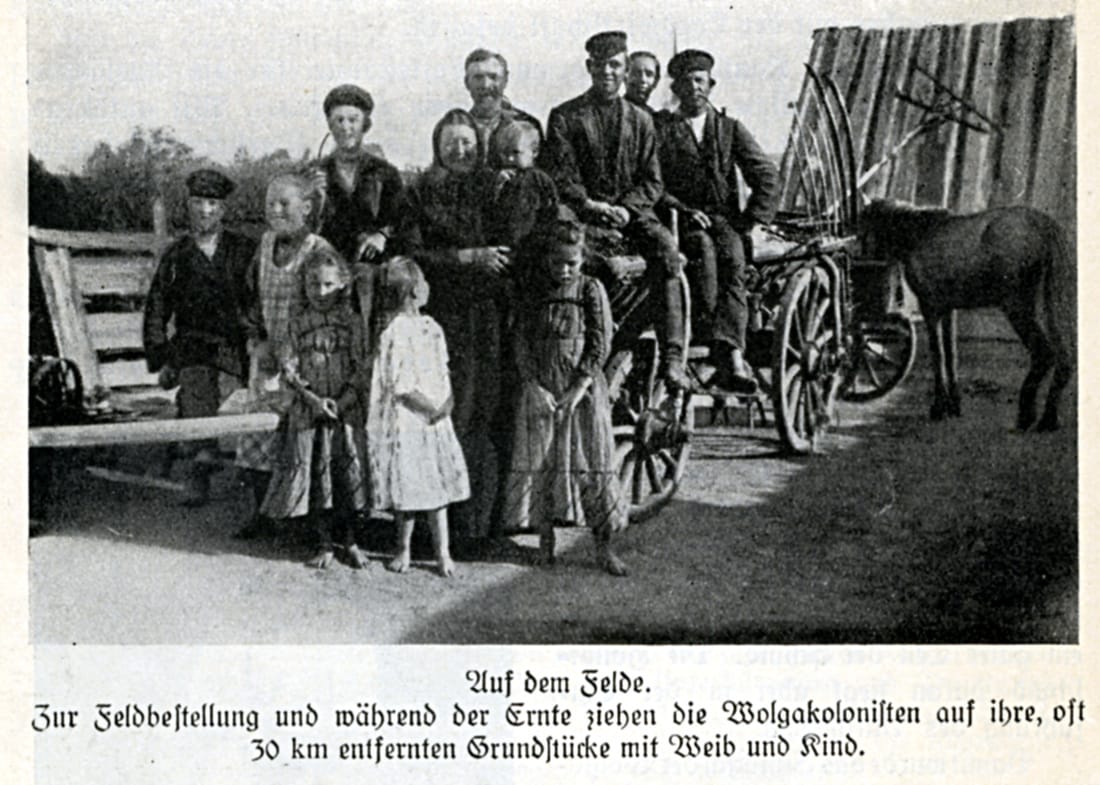 Photo titled "On the way to the fields." The caption states that farmers, along with wives and children, often had to travel up to 30 kilometers from their homes to work the fields and bring in the harvest.
It was still dark when the bells called the farmers to worship. In their festive clothes they hurried through the streets to the large wooden church which would soon fill to capacity. Once inside, solemn silence reigned until the organ thundered and thousands of people began to sing as one.

In spiritual unity the entire congregation fell to their knees. Before the altar, the pastor also knelt and asked the Lord to bless the work of farmers, to protect their cattle from disease, to prevent extreme heat and cold, to save the village from fire and illness. Standing, the farmers asked God to give them strength and patience to finish the field work and harvest, for the maintenance of the fields to be free of weeds. They also asked for strength in their faith in God and Jesus Christ. Then those gathered prayed: "Our Father" (the Lord's Prayer).

After the service the farmers returned home and quickly ate their breakfast. An hour later, they boarded their wagons laden with harrows, plows and other agricultural implements, as well as the pots and dishes they would use in the fields. Many of these men would not return to the village until the harvest was completed in the fall.

This story is based on an article titled "Ackerbestunde in Norka" written by Edith Müthel in 2001 and published in the "Christlichen Kalender für Frauen in deutscher und russischer Sprache". Only minor changes were made to add clarity. The article is posted on the website: www.hanna-strack.de (accessed December 17, 2016).
Last updated December 17, 2016.