Conrad "Con" Starkel was born November 16, 1880 in Neu-Norka, Russia. The 1900 U.S. Census shows that Con's parents, Conrad and Elizabeth Starkel left their home in Russia and arrived in the United States in 1890 determined to make a new start. Along with their son Con, and daughters Katie and Lottie, the Starkel's originally settled in Red Oak, Iowa with other immigrants from Norka. The family moved to Nebraska for a short time where another daughter, Katherine was born. By 1891, the family had moved west and were living in Tacoma, Washington.

The Starkel's settled into Tacoma's Hilltop area which was owned by the Northern Pacific railroad and developed to attract immigrant families, many from the Midwest. Most of the immigrants worked in the city's iron works, lumber mills and salmon canneries and it was important to live close to their employment. In 1890, a cable car (one of only three in America at that time) opened the Hilltop area for development of residential housing and provided an improved mode of transportation for the working people.

Notably, Hilltop had it's own baseball field and Con was undoubtedly exposed to the great American pastime on these sandlots, in particular at the 11th and K Street ball grounds. 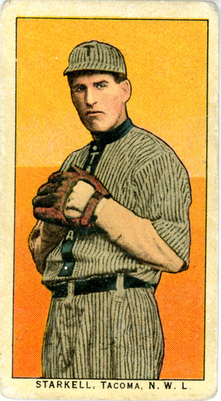 1910 Obak Tabacco card portraying Con Starkel in his Tacoma Tigers uniform. Obak inserted cards of minor league players with their products. Courtesy of Steve Schreiber.
The 1900 U.S. Census shows Con living with his parents in Tacoma where he was working at a sawmill.

In 1901, Con made his debut in professional baseball as a right-handed pitcher for the Northern Pacific ships team in Tacoma. Con was a big man, measuring six feet tall and 200 pounds and must have been an imposing presence on the mound.

From 1902 to 1904, Con played for teams in Walla Walla, Washington; Wallace, Idaho; Olympia, Washington; the Boise Fruit Pickers and the Portland Browns in the Pacific Coast League. 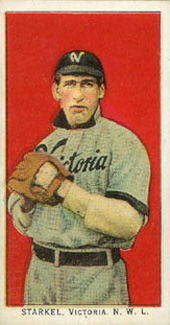 The New York Yankees drafted Con in 1905 but he was "farmed out" to Montgomery, Alabama and later played three games with Indianapolis.

in 1906, Con made his first major league action with the Washington Senators of the American League. Unfortunately, he only played in one game and completed the season with Albany of the New York State League and Baltimore of the Eastern League.

Prior to 1910, Con married Anna Jennie Pitt and their first child, May Jennie Starkel, was born in May 1910.

The 1910 season saw Con playing across the border for the Moose Jaw Robin Hoods in the Western Canada League where he compiled a 9-8 records before moving to the Chehalis Gophers of the Washington State League.

As his career wound down, Con played again in Canada for the Victoria Bees of the NWL in 1911 and finally with the Tacoma Tigers later that year. At age 31, after 10 seasons in the minor leagues, Con decided to retire with an overall record of 103 wins and 111 losses. 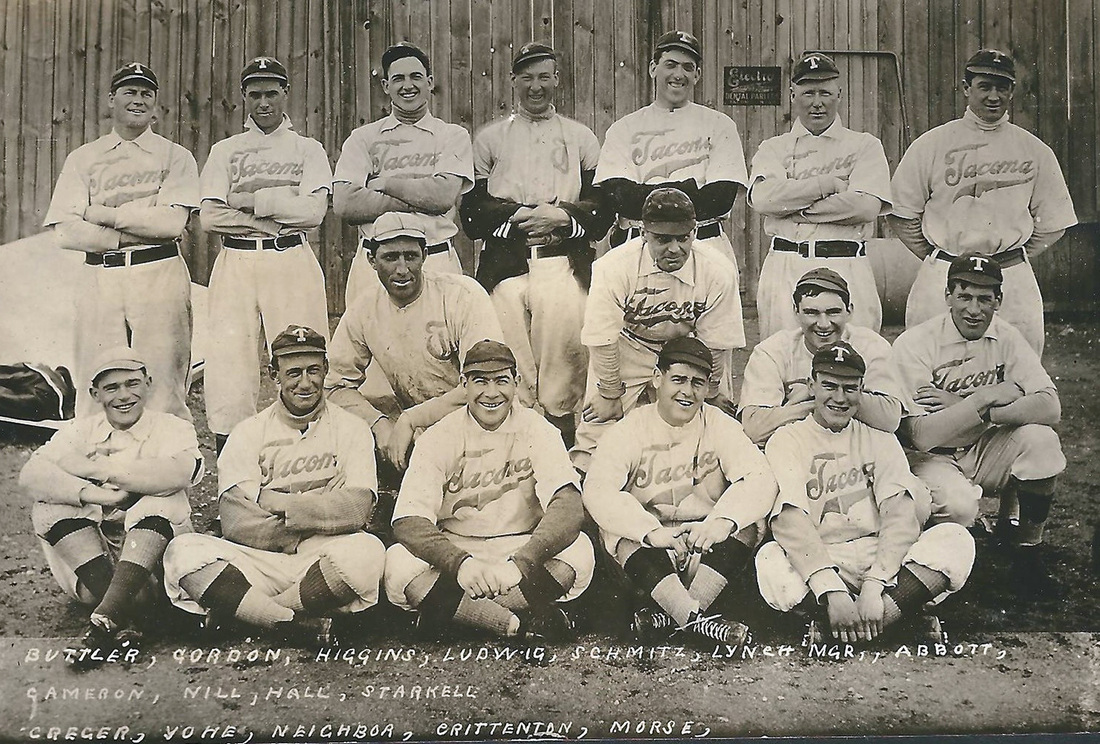 The 1912 Tacoma Tigers. Con Starkel is shown in the middle row to the far right of the photo (kneeling with arms crossed). Photograph used with permission of the David Eskenazi Collection.
Although his pitching days were over, Con was determined to remain in baseball as long as he was physically able. Taking a job behind the plate, Con worked as an umpire for two seasons in the Western Tri-State League.

An interesting bit of trivia is that Con is a member of the very exclusive "No At-Bats and A Perfect On-Base Percentage (OBP) Club," meaning that he had no official career at-bats and at least one walk in the major leagues. In Con’s case, in his one game with the Washington Senators he had one at-bat, but walked, and as a result his OBP is officially 1.000.

In June of 1915, Con and Anna Jennie welcomed a son, Conrad, to the family.

For many years Con operated a cigar business in the Perkins Building at 11th and A Streets in downtown Tacoma. Although he had retired from baseball, his enthusiasm for the game never waned.

Con died January 19, 1933 in Tacoma. His last wish was to be known as "a good baseball player." In 2012, Con's talent was recognized when he was inducted into the Tacoma-Pierce County Old-Timers Baseball-Softball Association Hall of Fame. 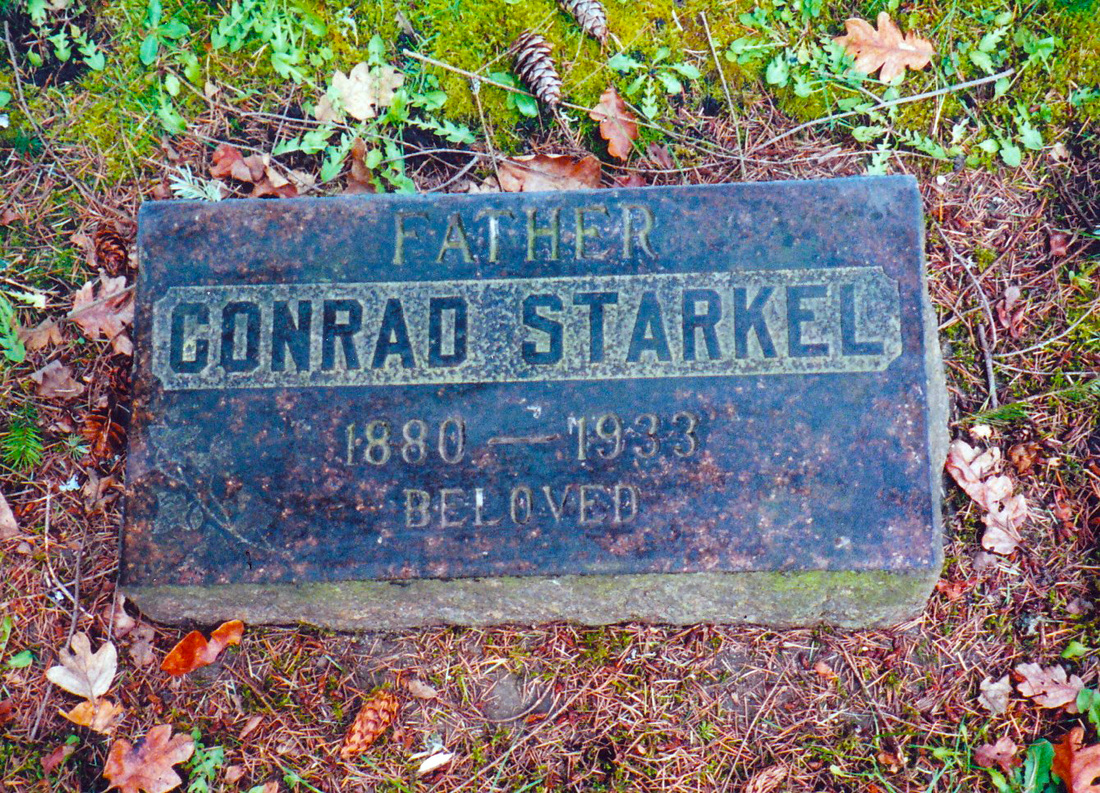 The Ancestors of Conrad Starkel

His 3rd great-grandparents: Johann Wilhelm Störkel, a tailor, was born 1747 in Böhnstadt, Oberhessen, Germany. His wife was Maria Catharina Poll, born 1755 in Germany. This couple was among the German colonists who settled in Norka in 1767.

His 4th great-grandfather: Daniel Störkel was born 1725 in Böhnstadt, Oberhessen, Germany. His wife's name is unknown.

The 1775 and 1798 Censuses of the German Colony on the Volga, Norka: Also Known as Weigand. Lincoln, Neb.: American Historical Society of Germans from Russia, 1995. Print.

The 1811 Census Revision of the German Colony on the Volga, Norka. Lincoln, Neb.: American Historical Society of Germans from Russia, 1996. Print.