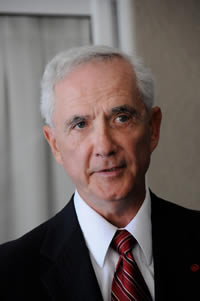 Professor Pauley has written six books (three of which have been translated into German). His dissertation was published in Vienna under the title Hahnenschwanz und Hakenkreuz: Steirisher Heimatschutz und österreichishcer Nationalsozialismus, 1918-1934. His best known book is Hitler, Stalin and Mussolini: Totalitarianism in the Twentieth Century (4th edition, 2014). From Prejudice to Persecution: A History of Austrian Anti-Semitism (1992) won two national book awards. His other books are: Hitler and the Forgotten Nazis: A History of Austrian National Socialism (1981); and The Habsburg Legacy, 1867-1939 (1972). His newest book is Pioneering History on Two Continents: An Autobiography, was published in July 2014 by Potomac books, a subsidiary of the University of Nebraska Press.

In 2010 Dr. Pauley was given Austria’s highest award for scholarship by the Austrian ambassador to the United States. Other honors four college and two university-wide awards for his research, three college teaching awards, and nineteen teaching and research grants including a Fulbright. Both his teaching and research have greatly benefited from more than thirty research and study trips to nearly eighty countries on six continents between 1945 and 2014. He has been listed in Who’s Who in America every year since 1995 as well as in ten other biographical listings. He is the recipient of two alumni awards from the University of Nebraska-Lincoln and is a member of the UNL Department of History’s Alumni Advisory Council as well as both the Chancellor’s Club and the President’s Club at the University of Nebraska. 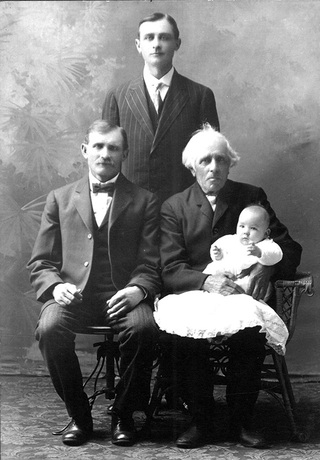 Portrait of Dr. Pauley's male relatives taken in Harvard, Nebraska. Left to right, his great-grandfather, Conrad Pauley (1862-1936), his grandfather Ludwig Heinrich Pauley (standing, 1886-1946), my great-great-father Heinrich Pauley (1834-1914), and his father, Carroll Righter Pauley (1908-1987). Heinrich and Conrad were both born in Norka. Photograph courtesy of Dr. Bruce F. Pauley.
Dr. Pauley is a descendant of Philipp Jacob and Maria Elisabeth Pauly (Pauli) who were among the original colonists that settled in Norka in 1767.