George W. Spady was born on December 2, 1913 in Norka, Russia. His family survived the Russian Revolution in 1917 and the terrible famine of the early 1920's in the Volga region before immigrating to Edmonton in 1924. 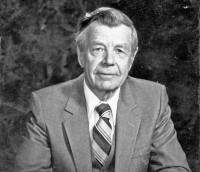 Rev. Spady grew up poor and he was the only child to further his education. He attended St. Stephen's College before becoming a minister.

One of his first postings was Pouce Coupe, B.C., where he travelled by horseback to minister to surrounding communities. He also met his wife of 63 years, Betty, in the small town before they eventually found their way back to Edmonton.

It's a long way from rural British Columbia to inner-city Edmonton. Through it all, Rev. Spady lived the lessons he preached.

During his tenure as a shelter director, Rev. Spady would sometimes welcome men from the shelter into his home for a meal with his wife and four children.

Rev. Spady was passionate about hockey and continued to skate until he was 85 years old. He loved to tinker on building projects, and spent two decades after he retired in 1980 building a log cabin in rural Alberta. He also loved the apple trees that stood in the yard of his old home in Edmonton.

His legacy in Edmonton's inner city continues today at the Spady Centre and Society in Edmonton which provides assistance to homeless people who are addicted to drugs or alcohol are particularly vulnerable to the climate and other groups on the street.

Rev. Spady was among those who supported the opening of the Edmonton Men's Shelter to help intoxicated men in 1973 and was the director until his retirement.

Three years later, a new facility was opened and named in his honour -- a tribute to which the humble minister only reluctantly agreed.

The centre has evolved over the years. It now provides detox treatment and transitional housing to thousands of men and women every year. While many social service agencies assist people under the influence of alcohol and drugs, the Spady Centre remains a place that takes in some of the toughest cases.