Harvey Sterkel appeared at his first American Softball Association (ASA) national championship at age 16 and in the years that followed established himself as one of the greatest fast pitch hurlers of all-time.

"I grew up in Globeville and in those days that was at the edge of town. I played in the Oldtimers Baseball League, but really all we needed was a ball, bat and a glove and a few of us to get together, and we'd make up our own games." 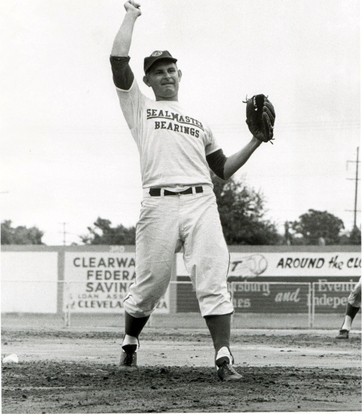 Playing for Sealmaster Bearings of Aurora, Illinois, Sterkel twice hurled the Sealmasters to International Softball Federation (ISF) World championships in 1966 and 1968, and was undefeated (7-0) in ISF World competition.


During his 21 years as an active player in Aurora, he was the most dominant pitcher of his time, earning international acclaim. Between 1956-1969, Sterkel won 345 games and lost only 33. He hurled 2,599 innings, walked 415 batters and struck out 5,212. He hurled 60 no-hitters and 15 perfect games and his Earned Run Average (ERA) was 0.34. Between 1965-1968, he won 52 games in a row. Sterkel helped Aurora win four ASA national fast pitch championships. He compiled a 43-24 record in 22 ASA national championships and earned ASA All-America honors eight times. Twice (1956 and 1959) he was the MVP in the Men’s Major Fast Pitch National Championship.In the 1959 national, Sterkel lived up to his nickname of “The Horse,” by winning eight of nine games to pitch the Sealmasters to their first national title.

Sterkel pitching was a picture of controlled power and grace and he had tremendous control. He pitched anyplace, anytime, against any team with never a complaint, and he did it at times with an arm so sore that a less of a man would have thrown in the towel. Not Sterkel, who was respected for not only his abilities as a world-class athlete but as a world-class human.


After retiring as an active player in 1977, Sterkel continued to stay involved by giving numerous clinics or helping the Aurora fast pitch team where necessary.

On June 10, 2014, Harvey Sterkel Field was dedicated in Aurora, Illinois