The Peculiar Story of Heinrich Nagel

​Heinrich was born in 1852. His mother was Katharina Heiser (also spelled Häuser). Katharina was born July 2, 1832 in the colony of Bettinger and confirmed in Norka in 1847. Heinrich's biological father is unknown and the relationship with Katharina appears to have been short.

In 1854, Katharina married Jacob Nagel. Jacob was born July 3, 1832 in Norka. In 1855, Katharina, Jacob and Heinrich moved to the colony of Warenburg on the Wiesenseite. By 1865, the family had relocated to the daughter colony of Brunnental.

The 1870-1884 Brunnental Communion Register describes Heinrich as the "illegitimate son" ("deren Unehelicher Sohn") of Katharina and Jacob. Heinrich's birth location is listed as Saratov and his birth year is given as 1852. This is not an exact date, which is unusual in the Communion Registers according to Maggie Hein. There is a phrase written after Heinrich's birth year: "ist griechisch ruscher Confession". This phrase roughly translates to "is of the Greek Russian faith". 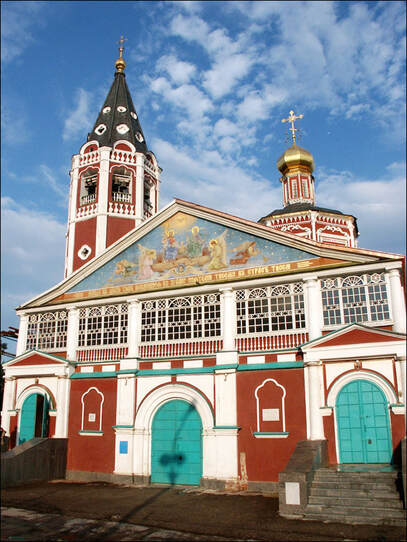 Russian Orthodox church in Saratov, Russia. Heinrich may have been baptized here.
This is a peculiar story because very few Volga Germans are known to have been members of the Russian Orthodox Church. It is likely that Heinrich's biological father was Russian Orthodox. Katharina may have initially consented to Heinrich's baptism in the Orthodox faith when he was an infant. However, his Orthodox baptism seems to have created complications during his teenage years. Given that Heinrich was Orthodox, he may not have been legally considered a "colonist". As a result, he may not have been eligible for the legal benefits provided under Catherine the Great's Manifesto (land allocation, exemption from the military, etc.).

Further evidence of Heinrich's story is found in the Russian State Historical Archives located in St. Petersburg. The archive holds a document titled "Case on the conversion from the Russian Orthodox to the Evangelical Reformed confession of Heinrich Heiser, Norka resident."

The case file shows that in March 1867, Katharina petitioned the Ministry of Internal Affairs - Office of the Department of Religious Affairs of Foreign Confessions requesting permission for her son Heinrich to be released from the Russian Orthodox faith so he could practice the Evangelical Reformed faith of his colony. The appeal states that Heinrich lives with his German relatives, does not understand the Russian language, and has never been taught the dogmas of the Russian Orthodox creed. At the time, those baptized as Russian Orthodox were required by law to remain members of the church. The report states: "Article 47 of Volume 14 of the Holy Law of the 1857 edition prohibits those born into the Orthodox faith, as well as those converting to it from other faiths, from departing from it and from taking a different faith, even if it is a Christian one."

Apparently, there was no flexibility in the law. A letter from the Ministry dated March 21, 1867 denies Katharina's request and orders her to provide reimbursement for 1 Ruble and 40 kopeks in silver, covering the cost of two sheets of paper and postage stamps.

Another letter, dated March 31, 1867, was sent by the Ministry of Internal Affairs to the high prosecutor of the Russian Orthodox Holy Synod. This letter ordered the Holy Synod to provide instruction to Heinrich in the Orthodoxy. Whether or not Heinrich actually received his instruction may remain a mystery forever.

There is nothing more written about Heinrich in the Brunnental Communion Register - no date of death, no notation about moving, and no information about marriage.

If you know anything more about Heinrich, please contact us.