Johann Christoph König was born in Schleiz, Germany on July 4, 1721. He is the son of Hans König, a day laborer from the Pfalz region, and his wife Katharina Reißmüller.

Johann Christoph began his studies at the Gymnasium in Quedlinburg in 1742. He went on to study in Altenstädt in 1745 and Magdeburg in 1747. In 1755 he graduated from Leipzig University with a degree in philosophy. In 1756, he moved to St. Petersburg, Russia and served as a private teacher to several German families until 1763.

In 1763, Pastor König began his leadership of the Lutheran Church in Oranienbaum, Russia (now Lomonosov, Russia). During years of migration by the German colonists, he was responsible to administer the oath of allegiance upon their arrival. It is likely that he also performed baptisms, marriages and funeral rites for many of the Protestant colonists during their time in Oranienbaum.

Johann Christoph married Dorothea Elisabeth Henning on March 17, 1780 in St. Petersburg, Russia. She is the daughter of Pastor Hilarius Hartmann Henning and Katharina Ilsma. Pastor Henning served the Lutheran church on the island fortress of Kronstadt from 1740 to 1747.

​Johann Christoph König died in Oranienbaum in 1785 after serving as pastor there for 22 years. 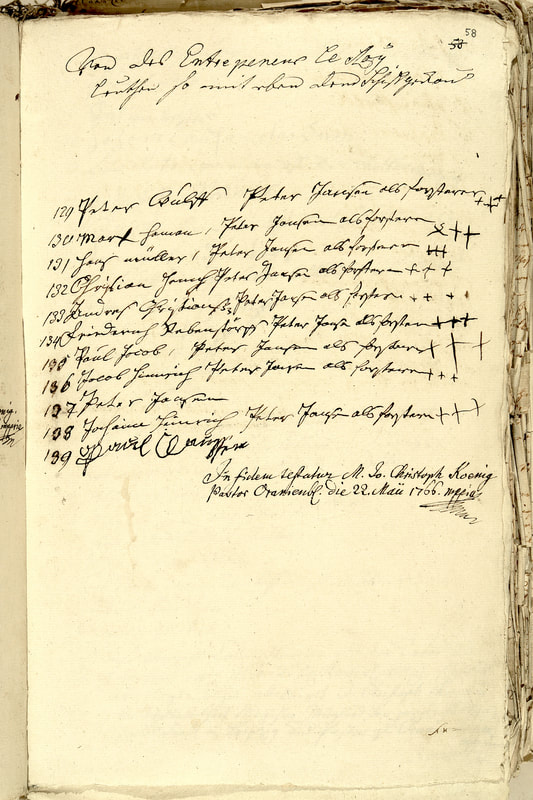 Image of an "Eideslisten" (Oath List) showing several colonists of the private recruiter Le Roy who had arrived in Oranienubaum on 19 May 1766. The list was signed by Pastor Johann Christoph König on 22 May 1766. Source: RAGA in St. Petersburg. Fond 283, Opus 1, Delo 61, Letter 58.