Johann Georg Hohnstein was born in Norka on November 14, 1855. He married Margaretha Treber on February 22, 1883. Margaretha was born on August 1, 1860 in Norka. Margaretha is the sister of Anna Maria Treber who married Henry Wetzel.

The family Hohnstein immigrated to the United States in 1891, sailing first from Bremen, Germany and then Southhampton, England aboard the steamship "Saale". They arrived in New York on June 17, 1891. Konrad had either died before emigrating from Norka or died en route to America. 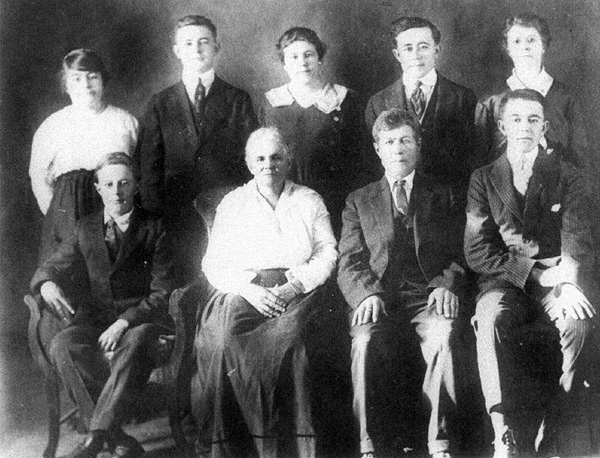 The Hohnstein family from Norka. Back row from left to right is Emma Harder, Henry, Lena Yeck, Johnny and Maggie Sterkel. Front row from left to right is Adam, Magaretha "Margaret" (née Trever or Treber), Johann Georg "George" and Louie. Source: Sabrina Nelson.
The Hohnstein family was living in Globeville, Colorado at the time of 1900 U.S. Census. They anglicized the spelling of their names to George and Margaret Honstein.

In 1920 and 1930, the Honstein's lived in Denver. George worked as a laborer and teamster.

George submitted his Declaration of Intention to become a U.S. citizen on February 11, 1919. He died a few months later on August 5, 1919 in Denver.

Margaret died on May 29, 1928 and was buried with George at the Riverside Cemetery.

Family information contributed by Sabrina Nelson and Georgia Hohnstein Conway.
If you have additional information or questions about this family, please Contact Us.
Last updated November 3, 2022