Johannes and Elisabeth became parents to at least eight children:
​
​The family patriarch, Johannes, died on November 12, 1904, leaving Elisabeth a widow with four children. Her youngest son, Heinrich died a few months later in March 1905. The other two boys were far too young to take over the household and Elisabeth did not get along well with her brothers-in-law, Ludwig and Adam. Two of Johannes' younger brothers had migrated to Canada, Peter in 1899 and Johann Georg about 1905.

It was decided that Elisabeth and her three children (Elisabeth Marie, Georg Conrad, and Johann Conrad) would also go to Canada. Her brother-in-law, Johannes Müller (born in 1882), made a decision to join Elisabeth and her children on the journey. 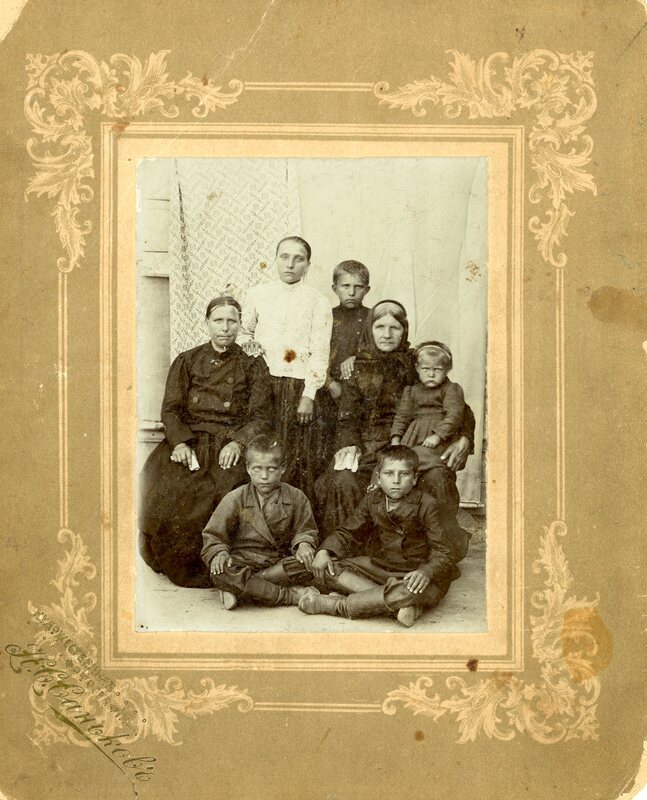 The Müller Family circa 1905 in Norka, Russia. Back row from left to right: 1. Elisabeth Müller (born Jost) labeled as "Mutter"; 2. Elisabeth Kniss (born Müller); 3. Johannes Jost, cousin of Elisabeth Kniss (2), came to Canada in 1924; 4. Elisabeth Jost (born Fink), mother of Elisabeth Müller (born Jost) labeled (1); 5. Probably Katie Jost, sister of Johannes Jost (3), she never migrated to Canada. Front row seated from left to right: John Müller, brother of (2) Elisabeth Kniss (born Müller); Georg Müller, brother of (2) Elisabeth Kniss (born Müller). Source: Robert Frederking.
The Müller's likely left their home in Norka in May 1908 and traveled by horse-drawn wagon to Saratov where they would board a steam powered train that would transport them to the Baltic seaport of Libau (now Liepāja, Latvia). A Russian passport listing all five family members was issued there on June 7, 1908. Obtaining a passport in Saratov was relatively expensive and time consuming. Many people chose to travel without a passport to Libau where one could be obtained quickly for less cost from travel agents doing business there. From Libau, the family sailed to Hull on the east coast of England. From there, they took an immigrant train west to Liverpool. 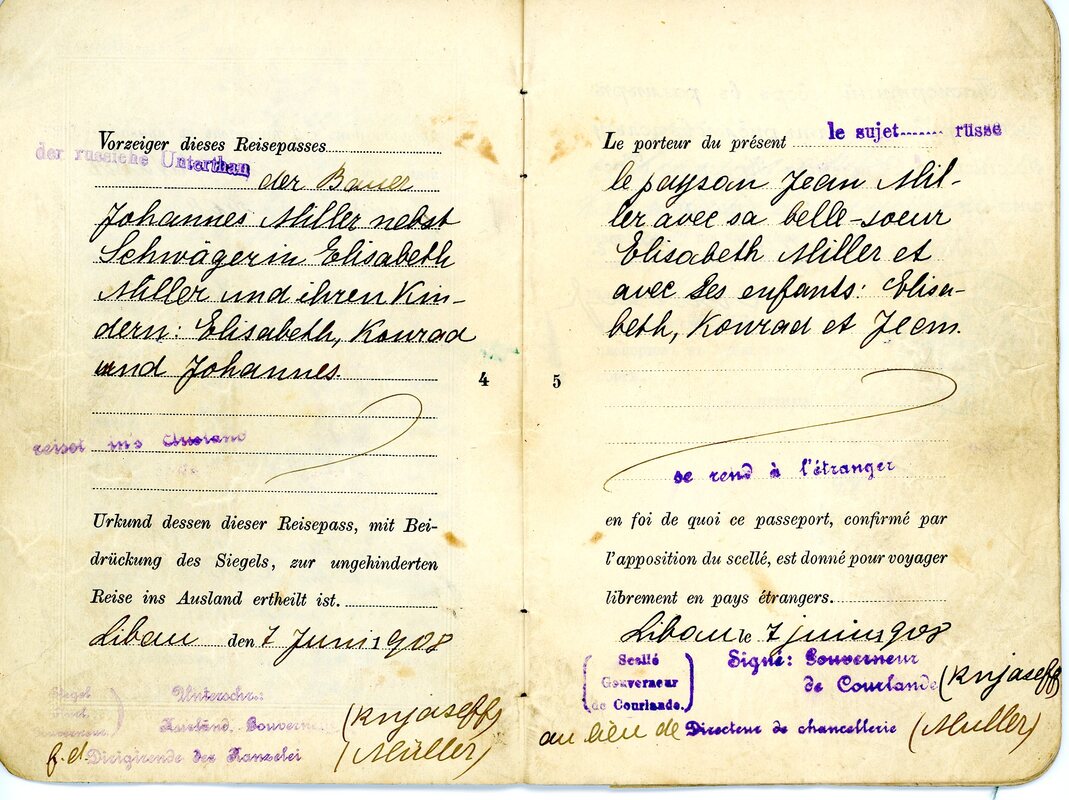 Passport for Johannes Miller, his sister-in-law Elisabeth, and her children: Elisabeth, Konrad and Johannes. Courtesy of Robert Frederking.
Elisabeth had vivid memories of how dirty and black things looked as they traversed England from Hull to Liverpool aboard an immigrant train. The coal soot seemed to cling to everything.

In Liverpool, it was discovered that Georg Conrad had an eye infection (probably Trachoma). He was not allowed aboard the ship bound for Canada and was forced to return to Norka with his uncle, Johannes. Elisabeth later recalled that Johannes was happy to return to Norka because he missed his sweetheart, Christina Schneider. Johannes married Christina after his return and they came to Canada in February 1909, along with young Georg Conrad whose eye infection had cleared.

On July 3, 1908, the family departed Liverpool aboard the steamship Victorian which arrived in Quebec, Canada on July 10th. 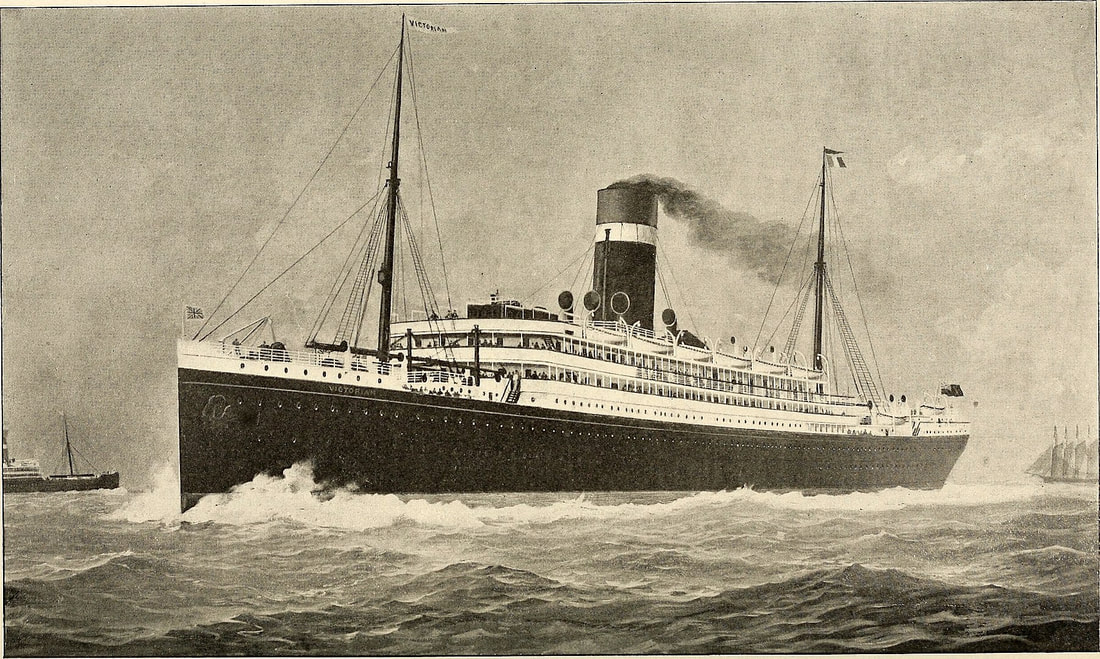 A Cassier's Magazine illustration of the steamship "Victorian" which sailed for the Allan Line from 1905-1917. Source: Wikipedia.
After her arrival in Canada, Elisabeth traveled by train to Stony Plain, Alberta where she married a widower, Johann Ludwig Jost (an older second cousin, once removed). Johann Ludwig's wife, Anna Maria Albrecht, died in 1897. Elisabeth and Ludwig moved to Vegreville, Alberta in 1919 and he died there in 1925. She was known to her family and circle of friends as Mutter Yost or Grandmother Yost.

Elisabeth's oldest daughter, Anna Elisabeth, was married in Norka and came to Canada in 1925.

Elisabeth's children grew and prospered in Canada. Her daughter, Elisabeth Marie, worked as a maid for one of her Miller uncles and for other German families in the area. She had ambition and felt that she wasn't learning new things from her relatives and countrymen. Elisabeth Marie then set out to find a job working for a family where she could learn the English language and Canadian social customs. These were the skills that were necessary to progress in the New World. Elisabeth Marie married Ludwig Adam Knies (Kniss) in 1910 and they had five children.

One of Elisabeth's descendants recalls that she rarely saw a doctor and was known for her special skills as a folk healer.

I have vivid memories of Mudder, as I spent summers from 1951 to 1956 with Grandma and Grandpa, and by extension Mudder as well. Amongst many “folk” talents she was skilled at reflexive massage, and cured me of “dropped foot” syndrome the summer of 1954!”

As to Mudder’s massage skills, it was a technique passed on to her during her years in Russia. It would probably be called myofascial release in today’s jargon. After overeating at one of our many holiday gatherings, Mudder would have us lie on the floor and would then “crack” your spine in the lower thoracic area to relieve the discomfort. Not sure if it did any good, but sure was fun! She also understood pressure points, sort of like acupuncture with no needles.

Elisabeth died on August 8, 1955 at her son John's home in Stony Plain at the age of 89. Her life was filled with difficulties, but she faced them all with courage and made it possible for her descendants to live better lives and become successful members of society. That is a great gift.

Photograph of Ludwig and Elizabeth Yost. University of Calgary (Glenbow Archives). Accessed 10 Nov 2021.
If you have additional information or questions about this family, please Contact Us.
Last updated December 10, 2021.