John Louis Loos was the son of John George Loos (1896-1976) and Katherine Pauley Loos (1895-1981) who were both born in Norka, Russia. Loos was born in Friend in Saline County in southeastern Nebraska. The family moved to the state capital at Lincoln and then to Clay County, where Loos in 1935 graduated from Harvard High School in Harvard near the larger city of Hastings in south Nebraska. 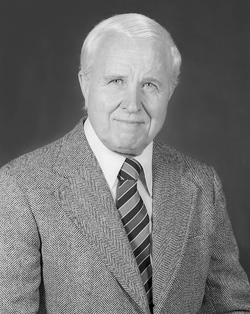 Loos obtained a Bachelor of Arts degree in 1939 and a Master of Arts in 1940, both in history from the University of Nebraska at Lincoln, where he was Regent Scholar and a member of Phi Beta Kappa.

During World War II, Loos was stationed in the Pacific Theater of Operations with the United States Army. An artillery officer promoted to major, he received the Bronze Star for meritorious service.

Loos was an assistant professor of history from 1948 to 1951 at Evansville College in Evansville in southern Indiana. He received his Ph.D. in history from Washington University in St. Louis, Missouri. From 1953 to 1955, he was an instructor at the John Burroughs School, a private college preparatory school in Ladue, an affluent suburb of St. Louis.

Loos came to LSU in 1955. There he specialized in the history of the American West, with emphasis on the life of William Clark, partner of Meriwether Lewis in the Corps of Discovery, which followed the Missouri River to the Pacific Ocean near what is now Astoria, Oregon. The year before he came to LSU, the Missouri Historical Society published his William Clark's Part in the Preparation of the Lewis and Clark Expedition (1954), a manuscript of 511 pages. Loos in 1964 published They Opened the Door to the West, a six-page article on Lewis and Clark useful for lecturers seeking a concise summary of the expedition.

For a quarter century Loos was the chairman of the Department of History. For a time he was interim dean of the LSU College of Arts and Sciences. In 1983, he was named an LSU "alumni professor"; in 1988, upon mandatory retirement at the age of seventy, he was honored as professor emeritus. From 1976 to 1977, he was president in 1976 of the Louisiana Historical Association. He was also affiliated with the Organization of American Historians.

In addition to his work on Lewis and Clark, Loos also published:

Loos died at the age of ninety-three at a nursing facility in Lafayette, Louisiana; he was buried in Harvard, Nebraska.

LSU launched in 2005 the John L. Loos Professorship in History.

In December 2011, the American Historical Association honored Loos with a memorial article on his career written by Gaines M. Foster, who recalls that Loos:

...frequently roamed the halls, dropping into offices, talking with everyone, keeping them informed, and, without ever saying so, assuring them that they were important. He rarely created a committee, saw little point in departmental meetings, and never called one until he knew what the vote would be. Some saw him as a benevolent dictator who always got his way; more acute observers often wondered what John himself really wanted to happen. He had an amazing ability to create consensus. In part it was because he listened and everyone trusted him. It also resulted from his willingness to accept responsibility and absorb blame, rather than deflect both, like so many administrators.