I am Reuben Miller of Stony Plain, Alberta, Canada., a descendant of  Norka immigrants who arrived in Stony Plain on December 31, 1924.

The following were in the family group to leave Norka at a time when leaving Russia was quite difficult, to say the least.

Our Miller family was identified in Norka as “ Yoosta Henricha”  (Henry Yost).

The family took up farming as that is what their occupation was in Russia.

I have a family tree done by my Aunt Mary Young and also one done by my father’s cousin, Anna Schmoll (née Miller), the youngest daughter of Peter Miller, my grandfather’s second youngest brother. Anna and family, and Lisa Miller, her sister, have lived in Ahlsdorf, Germany since 1998. I have visited them twice in the past two years . It is so interesting to hear their story of life after Norka while in “Gergishia.”  Since I have retained the “Norkerish” language and dialect, we are able to communicate with few difficulties via telephone and when I visit there.

Just two days ago, I met a lady in Calgary, who had emigrated to Canada 7 years ago , and whose grandparents had lived in Norka before being shipped to Siberia in a cattle car. This person’s mother, who now resides in Moscow, was born in a cattle car on the way to Siberia. What a story!

Konrad Miller
The photograph above shows my grandfather, Konrad Miller in his World War I uniform. Grandfather served in the Russian army as an officer. Usually, non-Russian soldiers were placed in the front lines to be killed off first. This tragic misfortune happened to his brother Jacob. Grandfather, the oldest son, likely got some preferential treatment in that he attended Russian school as well as German school. Since he was literate in Russian (im wort und schrift, i.e., in word and writing), he became an officer as most of the Russian soldiers were illiterate.

Grandfather returned to a Norka that was very different than the one he had left 3 or so years previously. The family endured the years up to December 1924 when they left for Kanada. Given what occurred during the following years in Russia; they did come to the promised land.

1921 is a year that most descendants of that area heard about. My grandfather vowed that never again would his family or he go hungry. To date, none of us have. 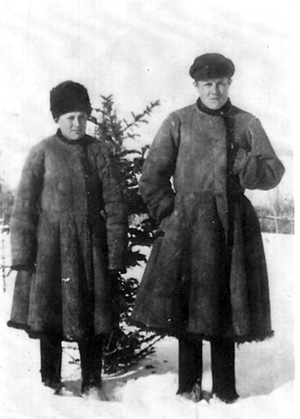 Johannes and Heinrich Miller
​The photo above shows my father Johannes Miller and his brother Uncle Heinrich Miller. The photo was taken on a farm just north of Stony Plain, Alberta in January of 1925; just after the family’s arrival in Canada. They are wearing the traditional winter wear which included the “dulup” (pronounced: dooloop) and “Filzstiefel” (felt socks).

If you have additional information or questions about this family, please Contact Us.
Last updated April 17, 2019.