Kraut Pirok (also known as Kraut Bierock, Kraut Kuchen, Runza) a typical Volga German food. The term Pirok (Bierock) comes from the Russian word Pirog (or Pirogi, Pirozhki) which means any type of bread that has cooked perforated meat in it's interior. The word Kraut is German and refers to cabbage that is also used in the filling.

The name Kraut Kuchen (the K's are pronounced like a hard G) for this item seems to be somewhat unique to Portland, Oregon. In other parts of the United States and Canada they are known as Kraut Runzas and Bierocks. 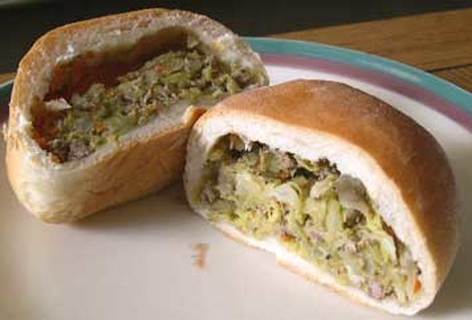 Make your favorite white bread dough.  Chop one head of cabbage and one large onion.  Heat about 1/9 cup oil in pan and add cabbage onion salt and pepper to taste.  Put on lid and steam until tender - do not brown.  Drain well.   Roll out bread dough and cut into 4" squares.  Top with a heaping spoon full of cabbage.  Bring corners together and pinch well.  Dip in melted butter and place seam side down on baking pans.   Let rise 1/2 hour. Bake at 400 for about 20-30 minutes. Cool.