No man that warreth entangleth himself with the affairs of this life, that he may please him who hath chosen him to be a soldier. II Timothy 2:4

One of the promises in the Manifesto of 1763, by Catherine The Great, was the exemption from military duty. Our German ancestors in Germany had recently survived the "Seven Years War." In fact for the last thirty years Germany had been ravaged by senseless wars. Catherine, the German born Empress of Russia knew and understood the problems confronting the Germans. She decided to invite them to come to Russia to develop the vast wastelands and to bring stability to the undeveloped region. The promise of exemption from military service was one of the reasons our German ancestors moved to Russia. After about a hundred years, in 1874, this provision was forgotten. Upon reaching the age of twenty-one, a young man was required to be a soldier in the Russian army. This included our German ancestors who as citizens of Russia obediently fulfilled their duty with respect for the tsar, according to the Bible verse in II Timothy. 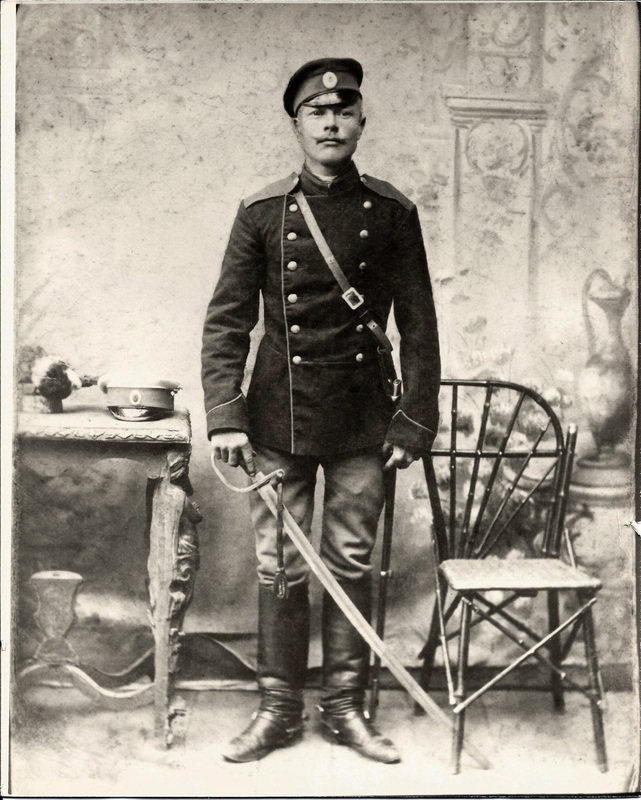 Johann Georg Maul (1879-1958) was born in Norka and served in the Russian Army for 5 years from 1905-1910. Georg was part of the 7th Kinburn Dragoon commanded by His Imperial Highness Grand Duke Mikhail Nikolaevich. From 1905-1910 his regiment was stationed in the town of Kovel in Volyn province. Courtesy of Debbi Hafling and Alexey Korostel.
Some of the boys eagerly looked forward to the time when they could become a soldier. When the army marched through their village, the children were delighted to watch the trained horses prance to music while the soldiers, in full uniform, arrogantly strutted by. I wonder how many young boys admired the soldier's polished boots as they looked down on their own bare feet. Occasionally, if a crowd had gathered, the soldiers would perform precise movements as the onlookers cheered! Heinrich Krieger, born 1885, told how much he enjoyed watching the horses. He said, "The horses were dancing to music right on the street." The older folks, however, did not want to acknowledge the beauty and excitement of these occasions because they felt betrayed. Not only was Catherine's promise of exemption from army duty broken, now the younger boys seemed overly fond of the idea of being a soldier. This bitterness, felt by the older generation, plus rumors of war caused many of our relatives to leave for America.

As a boy approached enlistment age, his enthusiasm waned. He now understood the army was not just parades, prancing horses, a uniform and shiny boots. Training would take him far from his familiar village, perhaps leaving a wife and small children behind.

Wilhelm Krieger, born 1886, said this about his experience in the army. "We traveled to large cities, far away, for training. During our free time, we could go to the town only if an officer went with us." When asked if being a German in the Russian army caused problems, he replied, "No, my officer was German and so were most of the men in my company." In addition to battle training, Wilhelm was a baker. The wages a Russian soldier received around 1907 were equivalent to 75 cents a month. No wonder the parents felt angry. Their sons, capable, dependable farm workers, were enlisted in the army with wages that could not support themselves or those at home.

Photograph of Konrad Miller from Norka who served as am officer in the Russian Army during World War I. Courtesy of Reuben Miller.
Russian soldiers were well trained but not properly equipped. World War 1 was the first war in which the soldiers of the chief nations involved wore steel helmets. Russia, however, was an exception.  The soldiers went to battle wearing cloth caps with visors, which looked nice but gave no protection against bullets or flying pieces of shrapnel. The weapons and equipment had not been modernized since the Russo­ Japanese War of 1904-1905 but the brave enthusiasm of the Russian infantrymen proved to be Russia's best weapon.

Heinrich Krieger came to America in 1903 at the age of 18. Wilhelm Krieger, his wife and four children arrived in America in 1913. Heinrich and Wilhelm were the brothers of my husband's grandfather, Melchior Krieger.

The army enlistment document of my maternal grandfather, Johann Georg Eusel states: assigned to the 259th regiment of reservists in 1907; may transfer to 2nd class reserve in 1916; transfer to voluntary soldier, militiaman, in 1924. My grandfather, his wife and children left Russia in 1912.

My Dad, Johannes Green, was also in the Russian army. I remember him telling about his travels to Turkey, Persia and other locations. He must have been in the reserves because he also managed the family store in the village. He eventually became an officer in the Russian army (White army). This promotion nearly cost him his life. In 1921 the Bolsheviks (Red army) rode into the village and fired shots at him. He jumped into a ditch, pretending to have been shot. The Bolshevik soldiers rode away thinking they had killed him. A short time later, my Dad (age 38 and single), his parents and younger brothers and sister left Russia leaving everything behind except for the clothes they were wearing, the family Bible and as much worthless money as they could sew into their clothes.