Phillip Lofink, Jr. was born in Lincoln, Nebraska on October 30, 1901. The Lofink family has a long history in Norka going back to one of the original founders, Johann Heinrich Lofink, born in Germany in 1736.  Johann Heinrich arrived in Norka sometime between 1764 and 1767.

Phillip’s father, Phillip Lofink, Sr., was born in Norka in 1861. Phillip Sr., his wife Anna Maria (née Brehm) and most of his children were also born in Norka. The Lofink family immigrated to the United States in 1892 and settled in Lincoln, Nebraska.

Phillip Jr. lived in Lincoln until the early to mid-1920s when he met and married Mildred Helena Jacobs. They were married January 3, 1928 in York, Pennsylvania. Phillip entered into a U.S. Army ROTC program at the University of Hawaii and he and Mildred moved there in 1930 sailing from NYC to San Francisco through the Panama Canal then to Hawaii.  Their daughter, Joan Marie, was born at Fort Shafter in Honolulu on November 23, 1932.

After graduation in 1935, 2nd Lieutenant Lofink was transferred back to the mainland and in April 1942, Captain Phillip Lofink was made 2nd in command of the newly activated 313th Infantry at Camp Pickering, Virginia. Phillip's unit went to various locations for training through March of 1944. Newly promoted Major Lofink was sent ahead to prepare for the arrival of the 313th Infantry regiment in England.

The 313th Infantry was stationed at Mabury Hall Camp, Cheshire, England until late May 1944 when they went to Lype Hill, Somersetshire to prepare for the D-day invasion (although they didn’t know what the plan was at that time).

They landed at Utah Beach at 1600 hours on June 14, 1944 and set out for Cherbourg. They relieved the 359th Infantry on the 18th and on June 26th Cherbourg was liberated from the Germans. They were granted Rest and Recuperation until July 2 and then began the march to Paris. Phillip was 1st Battalion Commander at that time and he was killed outside of Montgardon, France the morning of July 5, 1944. He received the Bronze Star and Purple Heart. 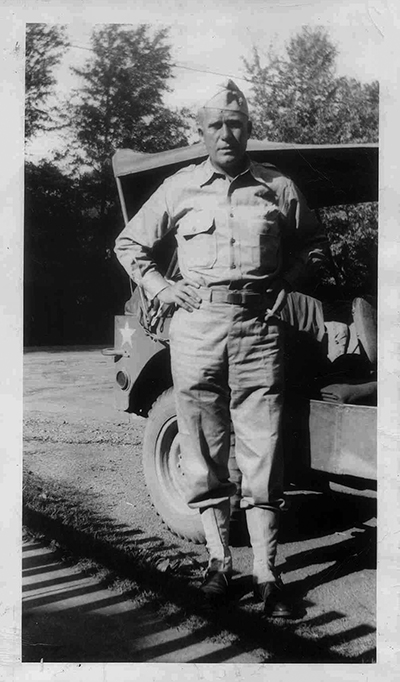 If you have additional information or questions about this individual, please Contact Us.
Last updated April 16, 2019.