The familiar gold emblem of the Future Farmers of America is know world-wide. But the designer of the emblem was little known for fifty years.

In 1934, Adeline Nolde, at age seventeen, was working as a secretary in the State Department for Vocational Education in Lincoln, Nebraska. Among her supervisors was L.D. Clements, one of the founders of the FFA. One day, Clements said to her "Hey, you like to draw. How would like to make me a design?"  He told her what he wanted in it, but didn't tell her the purpose.

That night, while her grandmother sat on the rocker crocheting, she worked away at a study table and in two hours completed her drawing. The next day her boss was quite pleased. "He asked me to put in on a mimeograph stencil," Adeline recalls. "They had no styli so I used a sharp pencil to do it."

She mimeographed thousands of brochures with the emblem on the cover, which were taken to the group's national convention in Kansas City. The first FFA jackets came out that year and featured the new emblem. 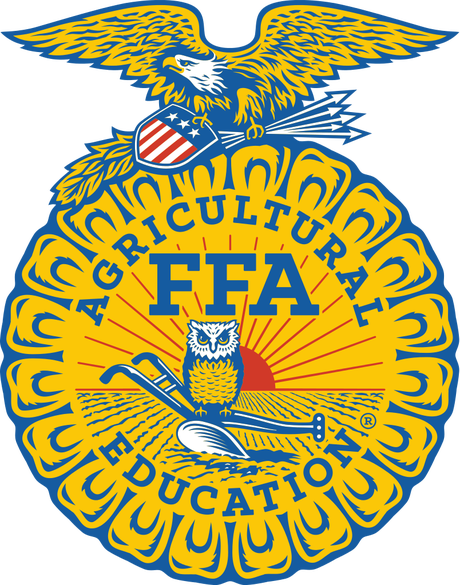 Adeline Nolde stayed on at the University of Nebraska where she became a secretary in the Engineering Mechanics Department. One day in 1985 she happened to mention to a staff person at the University's public information office that she had designed the emblem. The staffer told her son who was member of the FFA, and the secret was out. She was invited to the annual banquet of the Nebraska FFA where for the first time she was publicly recognized for her design.

Adeline, who retired from the University of Nebraska in 1991, was born on a farm near Sutton, Nebraska in 1916, the eighth child of Johann Adam Nolde and Anna Elisabeth Dennis. Johann Adam was the 12th child of Johannes Nolde and Anna Katharina Yost, both born in Norka. Johannes was one of the scouts sent to America in 1874 to explore the land in search of a new home. He returned with his family in 1878 and settled in Sutton where some of his descendants still live.