George Henry Sauer, Jr. was born November 10, 1943 in Sheboygan, Wisconsin to descendants of the Sauer family from Norka. His father George Henry Sauer was an All-America football player for the Nebraska Cornhuskers and later played for the Green Bay Packers in the National Football League.

George Jr. grew up in Waco, Texas and attended the University of Texas, majoring in in premedical studies. While at Texas, Sauer played as a wide receiver, catching passes from quarterback Jim Hudson. He was a member of Texas teams that went undefeated in 1963-64, winning the Cotton Bowl, and that defeated Alabama in the 1965 Orange Bowl. After being teammates as Texas, Hudson and Sauer would continue as teammates for the New York Jets for five years from 1965 through 1969.

Sauer was the first player at the University of Texas to leave college early to play professional football, a move that was strongly resisted by his coach, Darrell Royal and encouraged by his father, who was the director of player personnel for the Jets at the time.

Sauer played six seasons (1965-70) for the American Football League's New York Jets. During the 1968 season, he started for the Jets in the third AFL-NFL World Championship Game (Super Bowl III played on January 12, 1969), helping defeat the NFL's heavily favored Baltimore Colts, reputedly "the best team in the history of professional football." Sauer's eight receptions from Jet's quarterback Joe Namath was a significant factor in the outcome. 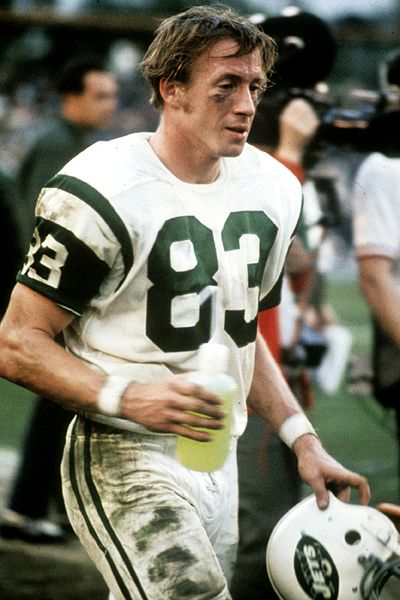 George Sauer Jr. leaves the field victorius in Super Bowl III (January 1969)
Sauer quit professional football in 1970, at the age of 27, because he considered it dehumanizing.

In an interview with The New York Times, he called professional football:

“a grotesque business” designed to “mold you into someone easy to manipulate.”

Sauer later returned to football and played in 1974 for the New York Stars and Charlotte Hornets of the World Football League. In 1979, he was an assistant coach with the Carolina Chargers of the American Football Association.

After retiring Sauer pursued writing, and completed a novel. In a 1983 article published in the New York Times, Sauer reflected on his football career:

“My passion for the game was not sufficient,” he wrote. “Football is an ambiguous sport, depending both on grace and violence. It both glorifies and destroys bodies. At the time, I could not reconcile the apparent inconsistency. I care even less about being a public person. You stick out too much, the world enlarges around you to dangerous proportions, and you are too evident to too many others. There is a vulnerability in this and, oddly enough, some guilt involved in standing out.”

George Henry Sauer, Jr. died after a long battle with Alzheimer's Disease on May 7, 2013 in Westerville, Ohio.

He hated the sport that made him famous, New York Times Magazine, December 12, 2013.