Jill Ann Sterkel (born May 27, 1961) is an American former competitive swimmer, Olympic champion, and former world record-holder. Sterkel won four medals in three Olympic Games spanning twelve years. She is currently the women's head coach of the Texas Longhorns swimming and diving team at the University of Texas at Austin. 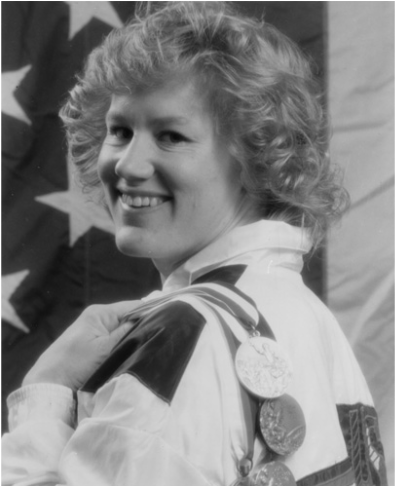 Photograph of Jill Sterkel courtesy of Jerry Krieger.
Sterkel was born in Hacienda Heights, California. Her father is Jim Sterkel, whose is the namesake of the University of Southern California's Jim Sterkel Court. She graduated from Glen A. Wilson High School in Hacienda Heights. She subsequently attended the University of Texas in Austin, Texas, where she swam for the Texas Longhorns swimming and diving team in Association for Intercollegiate Athletics for Women (AIAW) and National Collegiate Athletic Association (NCAA) competition from 1980 to 1983. As a senior in 1983, Sterkel won the NCAA national championships in 50-yard butterfly (24.26 seconds) and 100-yard butterfly (53.54 seconds). She won back-to-back Honda Sports Awards for Swimming and Diving, recognizing her as the outstanding college female swimmer of 1979–80 and 1980–81. 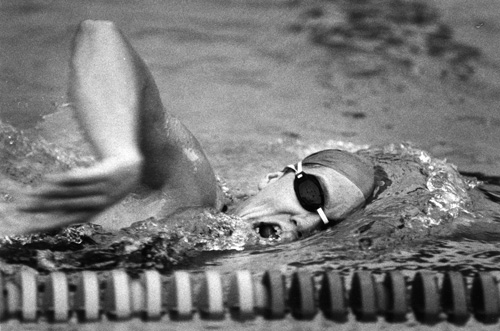 Photograph of Jill Sterkel courtesy of Jerry Krieger.
Sterkel represented the United States in three Summer Olympics. As a 15-year-old at the 1976 Summer Olympics, she won a gold medal as a member of the winning U.S. team in the women's 4x100-meter freestyle relay, together with her teammates Kim Peyton, Wendy Boglioli and Shirley Babashoff. After the U.S. women's team had been outshone in nearly every event by their East German rivals, Peyton, Boglioli, Sterkel and Babashoff achieved a moral victory by not only winning the relay gold medal, but also by breaking the East Germans' world record in the event final. Individually, she competed in two other events, finishing seventh in the 100-meter freestyle and not advancing beyond the preliminary heats in the 200-meter freestyle.

Sterkel qualified again for the U.S. national team at the 1980 U.S. Olympic Trials, but because of the American-led boycott of the 1980 Summer Olympics, she was unable to participate at the 1980 games held in Moscow, Russia.

She was inducted in the International Swimming Hall of Fame in 2002.